The Reformist newspaper Ghanoon and conservative news site Dana have both been suspended by the Tehran judiciary, likely for reporting on the enormous bail set for a government official. 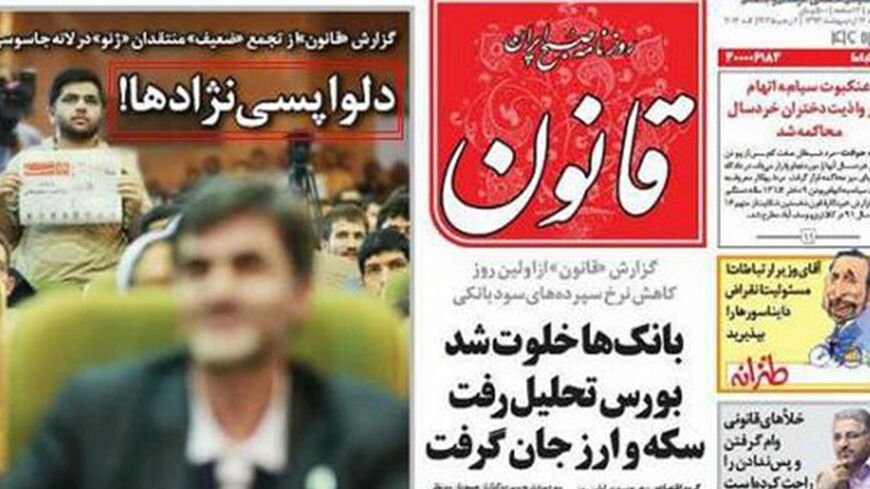 The front page of Ghanoon is shown from May 4, 2014, with a headline linking the "We're Worried" conference with supporters of former President Mahmoud Ahmadinejad. - Ghanoon
Arash Karami
@@thekarami
May 8, 2014

A Reformist newspaper and a conservative website in Iran have been suspended on the orders of the Tehran judiciary.

The newspaper Ghanoon, which means “law” in Persian, was notified by the judiciary yesterday, May 7, that the reason given for the suspension was that the organization had been “publishing lies in order to disturb public opinion and an article against Islamic norms.” Tehran public prosecutor Abbas Jaffar Dowlatabi announced today that the news website Dana has also been suspended.

The impetus for the suspension appears to be the reporting of the $38 million bail amount by a former government official after his high profile arrest. Mohammad Royanian was arrested May 6, but reportedly, he immediately posted bail and was released. The figure shocked many observers, and online and print media outlets raised the issue of corruption by government officials. Royanian has held many government posts, including deputy inspector of the armed forces, managing director of popular soccer team Persepolis and head of Iran’s Fuel and Transportation Management Organization.

The amount Royanian’s bail was first reported by Dana. In its report, Ghanoon sited Dana as its source. Before the Dana suspension became public, Ghanoon reported being surprised at being suspended over quoting as its source a article that had not been deleted or even warned. The Dana website is now offline.

Ghanoon criticized the “double standard” by which conservative and Reformist media outlets are treated, pointing to Ebtekar's recent short suspension over using a word in a headline that many conservative websites also used. Ghanoon also lamented that because of this suspension, 60 journalists are now out of work.

In the letter to Ghannon, the judiciary did not specify which articles caused the suspension, but provided two dates the infractions took place. While the first date coincides with the news of Royanian's bail, the second date corresponds to that of a satirical article published April 19.

Ghanoon had printed an article by an author opposed to getting remarried. He compared marriage to a shot from a needle, in that “It hurts a little at first, but after some time … it hurts less.” Ghanoon reported having already received a warning for this article when it was published, and opined that suspending the paper for it now “has no legal relevancy.” This was the article viewed by the judiciary as “against Islamic norms.”

Since President Hassan Rouhani’s election, hard-line websites and groups have attacked Ghanoon over a number of other articles.

After multiple incidents of clumsy censorship during Iran’s Fajr Film Festival in February, Ghanoon mockingly awarded the head of state TV, Ezatollah Zarghami, “Best Censorship” on its front page. In December 2013, Ghanoon was attacked by hard-liners over an interview with lawyer Soudeh Hamed Tavassoli, who cited Iran’s Islamic testimony law as an example of gender discrimination.

More recently, Ghanoon was targeted by the Student Basij Organization, which participated in the recent “We’re Worried” conference to voice criticism of the nuclear deal. The group became dubbed in the media as “The Worried” or “delvapasan.” However, on its front page, Ghanoon distorted the name of group by referring to it as “delvapasi-Nejad-ha,” drawing a connection between critics of the nuclear deal and supporters of former President Mahmoud Ahmadinejad. Ghanoon republished the official statement from the Student Basij Organization at the bottom of its response to the suspension.