To ensure his seat and his political future, Prime Minister Benjamin Netanyahu adopts the bill defining Israel as the nation-state of the Jewish people, raising “a white flag of surrender to the right wing and the settlers.” 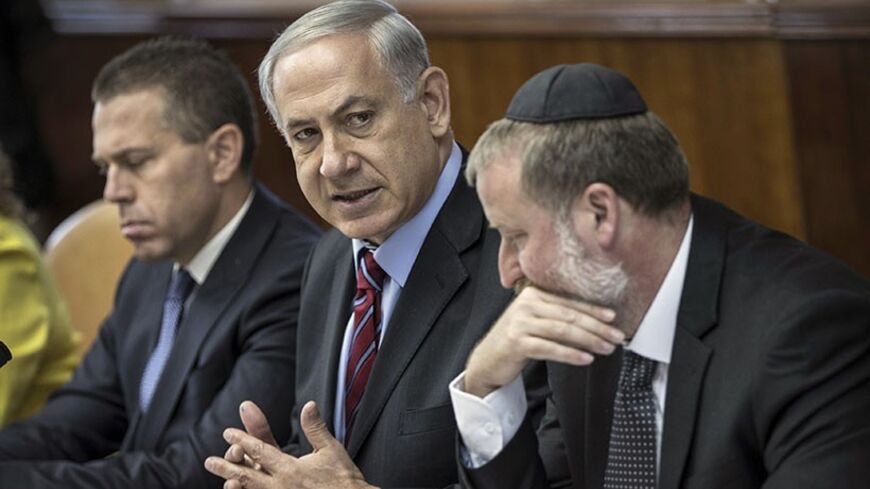 The first was the new Basic Law defining Israel as the nation-state of the Jewish people, which the prime minister announced Thursday (May 1). He said this law was intended to “anchor” Israel’s identity as a Jewish state.

The second was a decision made by the government on Sunday, May 4, a few hours before the opening of the events that mark the Israel memorial day for the fallen soldiers, to purchase a private jet for the prime minister and build a residence and office for him at a cost of 1 billion shekels [some $300 million]. The latter decision was inherited from former Prime Minister Ehud Olmert, though Netanyahu was quick to repeal it (in 2009), arguing that it was wasteful. Despite the opposition of Finance Minister Yair Lapid to this extravagant and expensive move, Netanyahu has embraced the same initiative, and warmly at that.

These two problematic decisions, to which the public acquiesced with alarming silence, come from the exact same place. It is no secret that Netanyahu’s goal is to remain prime minister of Israel for many years to come. As such, he hopes to benefit personally from the upgraded home and jet. To achieve this goal, Netanyahu is taking steps to secure his position among the right. That is the precise point of contact between that decision and the Jewish State Basic Law.

The law declaring Israel to be the nation-state of the Jewish people is Netanyahu’s updated ticket into the heart of the Israeli right, a position being fought over these very days by Economy and Trade Minister Naftali Bennett and Foreign Minister Avigdor Liberman as well. By placing this law on the agenda, Netanyahu is attempting to shake off any vestiges of the negotiations he was forced to hold, and which caused him to be suspect by the right. Even if this dramatic law ultimately fails, Netanyahu can pride himself that at least he tried. On the other hand, if the law does pass in the Knesset, it would leave an enormous question mark hovering over the democratic nature of the state.

The meaning of this is simple: Netanyahu is prepared to gamble on the democratic nature of the State of Israel to stay in office and reap political benefits. The very person who came out in his previous term against the uninhibited laws proposed by Knesset members from the right, who attempted to cause harm to the legal system, has abandoned all that is left of revisionist Zionist leader Ze’ev Jabotinsky’s respectful and honoring manner and the heritage of the late Prime Minister Menachem Begin in the Likud.

The legal argument, as we are reminded by Ben Caspit, is that “a basic law that defines Israel as a Jewish state gives Jewish aspects legal supremacy over Israel being a democratic state. By doing so, the basic law would be undercutting the principle of equality and reversing the principles of the Declaration of Independence, which are the fundamental and seminal principles of the State of Israel.”

It should come as no surprise that hate crimes and “Price Tag” assaults on Israeli Arabs are flourishing in this atmosphere. If Netanyahu really was shocked by the attack on the mosque in Fureidis [April 28], or the destruction of olive trees and cars owned by Arabs throughout the length and breadth of democratic Israel, he wouldn’t even go near a proposed law like the Jewish State Basic Law. Netanyahu condemned the hate crimes in Fureidis to fulfill his obligations. He was quoted as saying, “What happened in Fureidis was infuriating, and we are taking action to catch the people responsible for it.” He went on to say that he gave orders to involve the Shin Bet.

There is a connection between this atmosphere of total anarchy when it comes to containing acts against Arabs and the consolidation of the rule of the settlers within the Likud Party and the government. It seems as if Netanyahu had not only abandoned any efforts to combat extreme right-wing elements in his party such as the Danons and the Elkins. He is actually aligning himself with them by adopting the same kinds of legislation and patterns of operation.

Netanyahu is the first prime minister to vilify the legacy and the existing legislation which anchor Israel as a Jewish state that successfully maintains a democratic regime, and he is doing it for populist reasons.

In closed talks with political sources, a senior member of the Likud Party called the Jewish State Basic Law “political recklessness.” He said Netanyahu is destroying the very basis of the democratic heritage of Ze’ev Jabotinsky and Menachem Begin, and adopting the heritage of Knesset members Ze’ev Elkin and Yariv Levin instead.

Beyond this senior Likud official’s diagnosis of the situation, what is truly worrisome about his remarks is the fact that he is afraid to be quoted by name. He is concerned that the power groups within the right, which have taken over the Likud, will eventually come to settle accounts with him.

Obviously, this is not a case of paranoia. The fear is very real. Former ministers Dan Meridor, Benny Begin and Michael Eitan were expunged from the current Likud list to the Knesset only because they dared to fight (with considerable success) against toxic legislative initiatives by the group headed by Levin and Elkin. These initiatives were intended to weaken the Supreme Court, which they consider to be left wing, and to harm leftist organizations.

Until now, Meridor, Begin, and Eitan could take comfort in the fact that the price they paid was not in vain. Now, however, with the prime minister himself bearing the banner, and with senior ministers like Gilad Erdan supporting him, the absence of these brave politicians is sorely felt. This is especially true given the feebleness exhibited by Justice Minister Tzipi Livni and Finance Minister Yair Lapid, whose response to this damaging and discriminatory law was scarcely heard. Opposition to the law from the justice minister was little more than lip service, since both she and Lapid should place themselves at risk even, if necessary, by bringing down the government, to prevent this law from passing.

The passing of this law is a seminal move that goes far beyond disturbing the balance between the democratic and Jewish nature of the state, which have existed in tandem for the past 66 years. It could alter the established order and grant legal preferences to Jewish principles over democratic ones. In other words, it can officially turn Israeli-Arabs into discriminated-against and second-rate citizens. US Secretary of State John Kerry’s prediction of an apartheid state could be realized even sooner than anticipated.

Last year, the eve of Israel’s 65th Independence Day, which was celebrated just a few months after the elections that gave birth to the Netanyahu-Lapid-Bennett government, also marked the restart of negotiations with the Palestinians. Economic reforms filled the headlines, along with reports of Netanyahu considering whether he should bolt from the Likud to bring about a historic diplomatic move.

For anyone who still wonders whether Netanyahu plans to lead such a bold diplomatic initiative by abandoning the hard right and positioning himself in the center, there is a sharp and clear answer, on the eve of Israel’s sixth Independence Day with Netanyahu at the helm of state since returning there after a ten year “exile.” It is obvious to all that he has raised a white flag of surrender to the right wing and the settlers.