Prime Minister Benjamin Netanyahu launches a bill defining Israel as the Jewish homeland, composing a new public agenda after the collapse of diplomatic talks and the fading away of the Iranian issue. 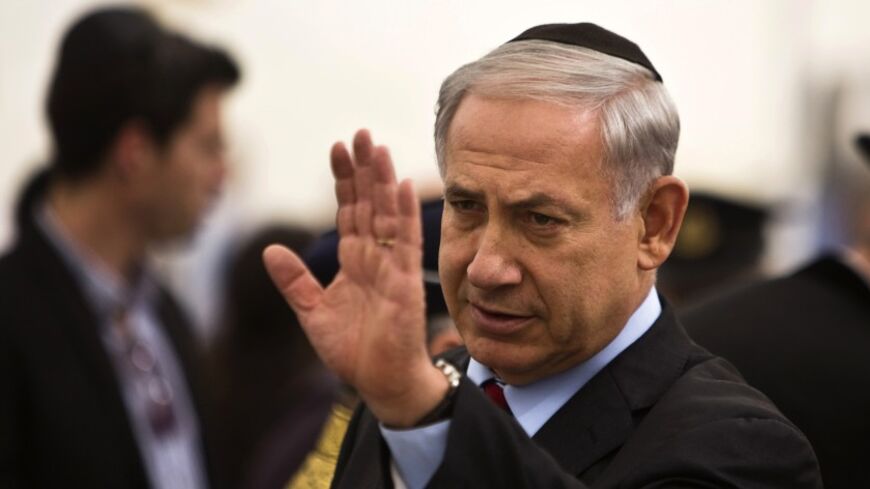 On May 1, during a visit to Independence Hall in Tel Aviv, Prime Minister Benjamin Netanyahu dropped a new political bombshell. He declared that in the upcoming Knesset session, which begins May 11, he is planning to promote a new basic law defining Israel as the nation-state of the Jewish people. Made a few days after Holocaust Remembrance Day and a few days before Israel's 66th Independence Day, his declaration would seem to have come at a perfect time, at least on the face of it.

Netanyahu's declaration caught the Israeli political establishment completely by surprise. The Israeli parliament has already seen similar initiatives to pass such a basic law. In the previous Knesset, it was Avi Dichter, the former Shin Bet director, who submitted a similar bill. However, due to the controversy that ensued, it was shelved. And now, it is none other than the prime minister who plans to give it a go. And by doing so, he forced Tzipi Livni, the justice minister — the one who stands to lose the most from the breakdown of the negotiations with the Palestinians — to immediately announce that she would oppose the premier's initiative and take advantage of her position as justice minister to curb it.

The main reason prompting Netanyahu to come up with this idea is simple and ancient — politics. Throughout his entire previous term, Netanyahu placed Iran at the top of his agenda. The Iranian threat was at the core of Netanyahu's essence and his raison d'etre. It was the beacon that guided him. The Iranian issue is what made him what he is. Evoking the Holocaust, he pandered to the traumas that are etched in every Israeli and to the primal fears of the Jewish people in recent decades. Some of Netanyahu's ministers make this private, secret, semi-comical bet: whenever the prime minister takes the floor to address the Knesset or in some other official event, those ministers make a bet on "how long it will take until Bibi (Netanyahu) gets to the Iranian issue." Well, the Iranian issue is off the agenda, for now. The Israeli premier has been robbed of his main asset.

No worries, though: What has motivated Netanyahu in the past year is the diplomatic issue. Following herculean efforts, the Americans were able to jump-start the negotiations between Israel and the Palestinians, with Netanyahu clocking quite impressive political mileage with this bandwagon. Demanding that Mahmoud Abbas, the Palestinian president, recognize Israel as the nation-state of the Jewish people, he turned it into a kind of a litmus test to prove that the Palestinians have come to terms with Israel's existence, or conversely, as proof that they are a far cry from accepting this, which is why there is no point in making interim agreements with them.

But lo and behold, the Abbas issue has also dissolved. The negotiations blew up. US President Barack Obama talks about "time out," and Secretary of State John Kerry follows in his footsteps. And now, as was published here in the last week, the American negotiation team, headed by US envoy Martin Indyk, is about to be disbanded. Indyk is expected to resume his prestigious post at the Brookings Institution.

Given this state of affairs, Netanyahu finds himself at an interesting crossroad. On the one hand, he has been able to cause the diplomatic process to fizzle out almost without suffering any casualties. Truth be told, the Americans divide the blame between him and Abbas, and the settlements are deemed to be the true obstacle that torpedoed the whole affair. But when all is said and done, the damages are tolerable. In the aftermath of this diplomatic round, Netanyahu emerges standing on his feet without having paid a significant price, for the time being. Yet, the prime minister finds himself without an agenda. To lead Israel, a prime minister must have some sort of an agenda. This has to be a prominent issue that supersedes all other topics and is deemed to be the core issue and the ultimate objective that defines his rule. As noted, Netanyahu used to have Iran. Later it was Abbas. Now he finds himself empty-handed.

Accordingly, the "Jewish people" issue has been mobilized to provide new content to Netanyahu's rule. If you cannot force Abbas to define Israel as the nation-state of the Jewish people, why not demand it of ourselves? Netanyahu is an expert at identifying common denominators and at finding consensus points and shared beliefs that do not upset the balance. This is what he did when he delivered his Bar Ilan address at the beginning of his previous term (in 2009), and that's what he's trying to do now.

How will Livni account for her objection to a bill that defines Israel as the nation-state of the Jewish people? Her explanation would have to be tortuous, tiring and long-winded, thus making her look like someone who bites off the collective Israeli hand that feeds her. She could argue that a basic law that defines Israel as a Jewish state gives Jewish aspects legal supremacy over Israel being a democratic state. By doing so, the basic law would undercut the principle of equality and reverse the principles of the Declaration of Independence, which are the fundamental and seminal principles of the State of Israel. But the majority of people in Israel would not have a clue as to what she is saying. What is it that we ask — one small, besieged country for the entire Jewish people? What's wrong with that? Why be opposed to that?

The bill that's currently on Netanyahu's mind has been drawn up by Knesset members Ayelet Shaked of the HaBayit HaYehudi Party and coalition chairman Yariv Levin of the Likud Party. Opposed to negotiations with the Palestinians, these two ultra-right parliamentarians also reject the two-state solution. Prior to formulating the proposal, Shaked held talks with Knesset member professor Ruth Calderon from Yesh Atid, the party of Finance Minister Yair Lapid, and with professor Ruth Gavison, a renowned Israeli jurist who serves as the legal-issues mentor of Livni.

Among other things, it was suggested that Israel's historic 1948 Declaration of Independence, which defines Israel as the homeland of the Jewish people and a Jewish-democratic state, be turned into — as is — a basic law. The negotiations have not resulted in an agreement but the moot points were not substantive.

The upcoming Knesset session will deal with, among other things, this initiative. It is possible that a bill defining Israel as the state of the Jewish people will ultimately be introduced — one that is acceptable to everyone, or at least to the coalition, from Foreign Minister Avigdor Liberman to Lapid and Livni.

If and when that happens, Netanyahu will have to do two things. First, he will have to find, once more, a new agenda for himself. Second, if and when the negotiations with the Palestinians resume, Netanyahu will not be able to once again demand that Abbas recognize Israel as the state of the Jewish people, because it will have done so itself. Any recognition of Israel will also consist of accepting its basic laws. Netanyahu will find himself driving without brakes, unable to stop the negotiations before they even get started. But until then, he is good to go. One problem at a time.