What can Lebanon learn from Suleiman's presidency?

As Lebanese President Michel Suleiman’s term ends on May 25, his successor should examine the obstacles and successes of his mandate to prepare for the path ahead. 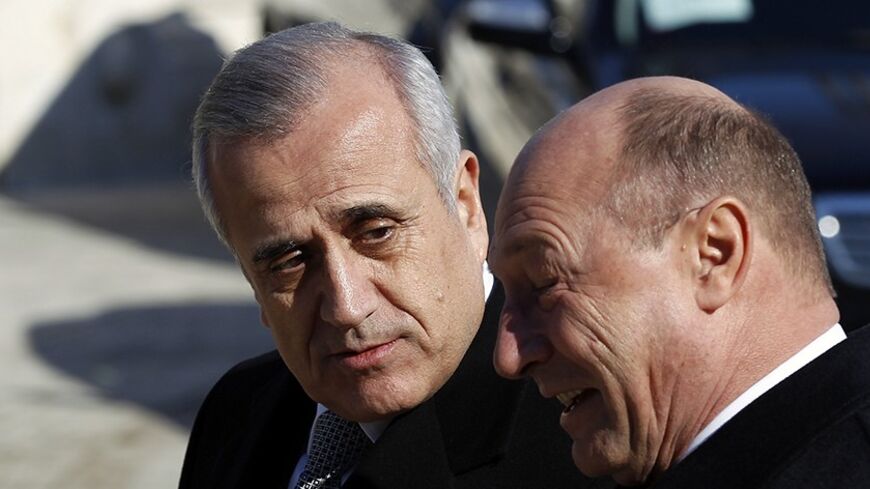 The rule of President Michel Suleiman is almost over. In just a few days, or more accurately, a few hours, his constitutional mandate will come to an end. On May 25, the president will leave the palace and return to his house, in accordance with the articles and provisions of the constitution. The amendments made pursuant to the Taif Agreement compel the president to hand over all authority to the cabinet in case a new president is not elected before the specified deadline, a scenario that is almost inevitable.

Despite accusations, Suleiman did not attempt to extend his mandate, as did other previous presidents. If it were his intention, he would not have recently intensified his political movement to restore the balance of the internal political scene, or escalated his stances, demanding the respect of the constitution and the halt of the boycotting campaigns of the electoral parliamentary sessions. Also, he would not have leveled such scathing criticism against Hezbollah, denouncing the way it used its weapons outside the framework of legitimacy and its embroilment in the Syrian war.

In the last period of his mandate, Suleiman seemed as though he was racing against time, trying to compensate for the first phases of his rule, which can be called, the era of “Suleiman I.” It is true that, at the time, he did not make controversial decisions and was a man of few words, avoiding confrontations to the extent that some accused him of being weak and lenient with Hezbollah. Suleiman, however, proved to be a different man in the last two years. The era of “Suleiman II” was characterized by boldness and eye-catching political movement, even if his latest stances have stirred such controversy that some went as far as insulting him personally.

Circumstances, perhaps, opened the door for or imposed this change: The collapse of the March 14 camp's strength, and the developments of the Syrian crisis have revealed the excessive power of Hezbollah, which exceeds the state in terms of role and weight. This is why Suleiman was compelled to seek the restoration of balance on the internal scene.

Reassessing the rule of Suleiman, it is important to look into the most significant characteristics. First is the success of the president on the diplomatic level. Suleiman has certainly succeeded in restoring the leading diplomatic role of the presidency. This role had faded away in the post-Taif era to the advantage of the Syrian regime, which was in charge of foreign affairs, and the cabinet’s premiership that was long assumed by former Prime Minister Rafik Hariri, a balanced, rather overpowering figure on the international level. Suleiman succeeded in restoring the role of the president as a maker of foreign policy. This was favored by the waning of Syrian influence and the crippling that befell the cabinet and parliament for long periods, during which the presidency was the last resort and the only organized institution within the state.

The second characteristic of Suleiman’s rule is his fervent and continuous attempt to distance Lebanon from the conflicts of regional axes and the Syrian war. He was the power that pushed the Baabda Declaration of June 2012, which called for noninvolvement in the Syrian crisis. This document was ratified with the unanimous consent of all parties. Later on, however, Hezbollah refused it after it succeeded in regaining the initiative on the battleground in Syria and changed the power balance to its advantage. What happened cannot be changed, yet the most important thing is that the Baabda Declaration has distanced Lebanon from axes and conflicts, a concept that was exclusively followed by one group of Christians. Today, the concept of self-distancing has become a national demand raised by both the Christians and Muslims. Currently, there is awareness about this concept being a prerequisite for the continuity of the Lebanese state and the sustainability of the social contract between the Lebanese.

The third characteristic of Suleiman’s rule is administrative decentralization. It is true that the proposed decentralization law has yet to be passed, yet through the leverage of the president, a committee, which fulfilled its task a while ago and drafted the law, was formed. All that’s needed now to make this a law is for the bill to find its way to parliament to be discussed and ratified. Drawing on his calm manner and reliance on state institutions, Suleiman succeeded in advancing the issue of decentralization, which has been put on hold since the signing of the Taif Agreement and considered as a taboo, subjected to political blackmail and bargains. It is not a secret that administrative decentralization in a pluralist country like Lebanon diffuses sectarian tension and contributes to transforming the conflict from sectarian to developmental.

The most important achievements of the president are effective foreign policy, the distancing of Lebanon from regional conflict and the adoption of decentralization as an organizing framework on the internal level. The president’s trajectory during his rule may be the most important characteristic given the lessons it offered. Suleiman was elected through an international consensus and Qatari sponsorship, at a time when Qatar had close ties with Syria, Iran and Hezbollah. Suleiman tried to balance between the different parties and play the role of the referee. However, he soon realized that the rule needed the minimum of internal balance, and for all parties to abide by the rules of the game, represented by the constitution and state institutions. This is why he began to call to minds the pillars of the sovereign state: the state being the only bearer of arms and the respect of institutions. His mandate started off with an attempt to reach an agreement, and ended with the defense of sovereignty. This trajectory provides a lesson to the successor and to whoever seeks the stability of the small country, hoping that he will pick up where Suleiman left off.