The core of the crisis of the Lebanese national pact is the absence of an electoral law that represents the sects fairly, especially the Christians. 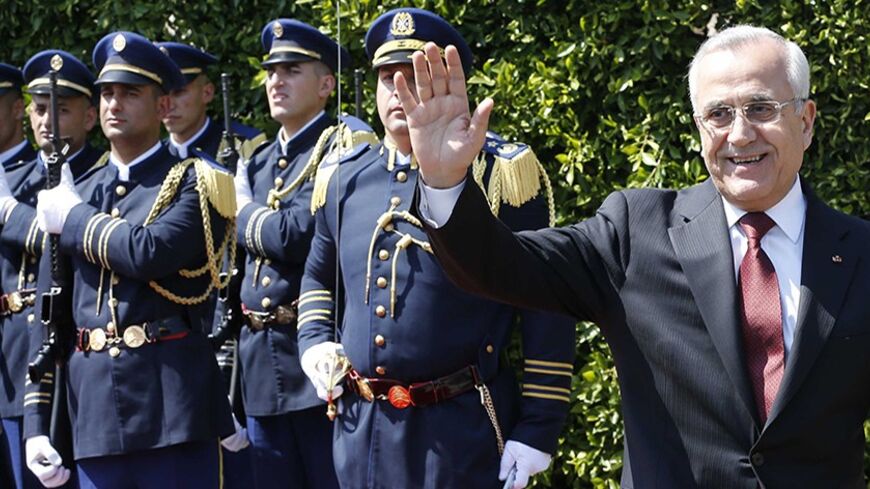 Outgoing Lebanese President Michel Suleiman gestures beside his wife during his farewell ceremony at the presidential palace in Baabda, near Beirut, May 24, 2014. - REUTERS/Mohamed Azakir

Lebanon failed to elect a president in accordance with the provisions and deadlines specified in the constitution. Lebanon chose to have a presidential vacuum, as a kind of nihilism. Ironically, Lebanon chose the vacuum under the heading of the “national pact,” which is the unwritten agreement laying down the foundation of the country's confessional system. It’s as if having a vacuum is the fate of this small country, which in the absence of national consensus has been turned into a land of conflicts among major regional powers.

The members of parliament from the March 8 coalition who boycotted the electoral sessions and sabotaged the election did so by claiming their adherence to the national pact, whereby the sects must agree on a certain issue. In other words, electing a president is governed by the sects reaching an agreement, which is in fact the sects’ leaders striking a deal. Here, it must be noted that the blocs' representative nature and their leaders are already in crisis because they are themselves the product of an unfair electoral law that violates the national pact. It is worth mentioning that this law does not represent the sects fairly, especially the Christian sect, and does not take into account the 50-50 Christian-Muslim rule, which is a pillar of the national pact.

It is true that the national pact is the base upon which stands the social contract, representing the fundamental agreement among Lebanon’s components. And this is the case of all pluralist countries. But it is also true that the first embodiment of this pact is to uphold the constitution’s clauses and mechanisms to resolve internal differences, to keep institutions functioning and to prevent a power vacuum. From this angle, not holding the election is in itself a violation of the pact, not vice versa.

There is no doubt that the constitution and the Taif Agreement have many shortcomings, as revealed by the experience of recent years. Furthermore, the government under Syrian tutelage from 1990-2005 didn’t obey the provisions of the constitution nor the bases of the national pact, and imposed weak ruling mechanisms, such as the troika system and electoral laws aimed at consecrating Syria’s tutelage.

In the following period, which was characterized by the predominance of Hezbollah and its excess of power in the domestic arena, Hezbollah sought to institutionalize some practices, such as the blocking third in government decisions. That provided Hezbollah with the ability to disrupt all government institutions, something that the other side considered a departure from the constitution and from the spirit of the national pact.

In fact, the national pact, before it becomes a mere slogan, is itself in crisis. The pact among the Lebanese sects has a defect that came to the surface with the decline of Syrian influence in 2005. The defect can be summarized by two points: one, the partnership crisis and the distribution of power among the sects, in addition to the issue of how the sects are represented and consequently to their right to choose their representatives; and two, the state project being on hold because of the lack of consensus on the face of governance and its components. This, of course, raises a deep question about Hezbollah’s weapons and legitimacy, and also raises other regional issues — whether those related to the conflict with Israel or Iran — that have lately taken unprecedented sectarian dimensions.

Addressing the national pact crisis requires, before anything else, a consensus on an electoral law that restructures the government in a more representative way and addresses Christian concerns stemming from what happened to them during the era of Syrian tutelage. The rules of democracy should be solidified; first among them is to resolve internal differences with the ballot box. Agreeing to any kind of president while keeping the current election law, or keeping the issue of Hezbollah’s weapons outside the circle of debate, would exacerbate the crisis of the national pact.

In the absence of effective solutions to the outstanding issues, any settlement that produces a president will be a settlement at the expense of the national pact and its underlying principles. All the talk of a "strong" president is irrelevant before having a fair and sound election law to determine the size of the representation of the president within his community, if this is what’s meant by the word "strong." This talk of a "strong" president is inappropriate before there’s a consensus among Lebanon’s sects about how he perceives the points of contention over which the Lebanese people are divided. Those points are the core of the national pact.

In brief, electing a president in itself will not resolve the crisis of the national pact. Resolving the crisis requires a basket of reforms and compromises. That may take a long time, and can only be done if there’s agreement. Let’s not forget that the debate on reforming the electoral law, for example, took months and raised a storm of controversies, but was ultimately fruitless. That’s despite the many proposals of several committees set up for this purpose, and even then, the situation came to an end with the extension of the current parliament's term in May 2013.

Linking the national pact crisis to electing a president resulted in no president being elected and is causing the presidential seat to remain empty indefinitely. For this reason, it would have been better to follow constitutional norms and democratic traditions, albeit in form only, as we await the resolution of the national pact crisis. Then, we could elect a president who has the minimum of national consensus. Perhaps his election would at best mark the start to resolve internally contentious matters, or at worse, he would simply manage the crisis as we await solutions from abroad. Both cases are better than a vacuum because a vacuum is fraught with dangers, including the disintegration of the republic starting from the top of the pyramid.

In addition, entering a presidential vacuum may have been a Lebanese decision, but getting out of it, as experience shows, will be a decision from abroad. Will the international efforts, if they occur, correct the defect in the national pact? Or will they simply redistribute authority according to the power balance and alliances? The answer may surprise some of those who bet on the vacuum and some of those who accepted the bet.