If Lebanon’s parliament fails to elect a president by the constitutionally stipulated deadline of midnight on May 24, the ensuing vacuum could further exacerbate the already tense situation in the country. 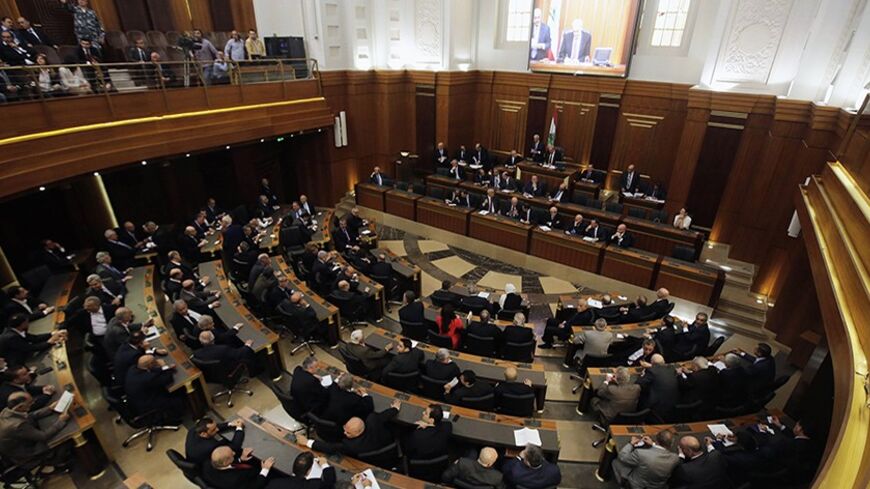 Lebanese members of parliament gather to attempt to elect the new Lebanese president in the parliament building in downtown Beirut, April 23, 2014. - REUTERS/Joseph Eid

On May 15, the fourth parliamentary session was held to elect the president of Lebanon. For the fourth consecutive time, the session was postponed due to the lack of a quorum. A new session was scheduled for May 22, and this could be the last or next-to-last session before the constitutionally specified deadline for electing a president ends at midnight on May 24. At this time, there is nothing to indicate that the fate of this session will differ from that of its predecessors. If the required quorum is not achieved, then a presidential vacuum will be inevitable, and this could open the door for the obstruction of all institutions and mechanisms of governance.

First, the March 8 bloc is resorting to the weapon of "obstructing [parliamentary] sessions," trying to prevent the arrival of any candidate who does not enjoy its approval, and this is done under the pretext of preserving Lebanon’s "National Pact," the unwritten agreement laying down the foundation of Lebanon’s confessional system. Thus, the parliamentary one-third has transformed into an "effective minority," taking the place of the effective majority. This is because, by using this third to prevent a quorum, it has the right to veto any topic or item until it agrees on it, before resorting to the ballot box. Indeed, this bloc had already instilled the principle of the blocking third at the government level, especially after the Doha Agreement in 2009. The fact that March 8 had a third of ministerial posts in the government gave it the ability to disrupt all decisions that it did not agree with.

Second, the latest reasons provided by March 8 for disrupting sessions is that it rejects the March 14 bloc's announced candidate, Sami Geagea, under the pretext that the latter is a "provocative" candidate, as was stated by a Hezbollah official. The irony is that the bloc disrupting the session rejects all of the candidates who have been announced thus far, but hasn't presented any candidate itself. And there are many candidates: In addition to the March 14 bloc's candidate, there are centrist candidates, such as member of parliament (MP) Henry Helou, and others from outside parliament who have expressed their readiness to assume the post of president.

The presidential vacuum will add another crisis to the country, but this time it is constitutional and could lead to the paralysis of all institutions. It is known that during the last 10 days before the end of the constitutional deadline — i.e., May 24 — parliament turns into an electoral committee. In other words, parliament can no longer legislate, monitor the government or start political debates.

The pertinent question today is, after the expiry of the constitutional period, will the parliament be able to restore its functions in the absence of the president of the republic?

Many insist that this would be in direct conflict with the National Pact that has long sheltered Hezbollah. No legislation can be introduced if the top post held by a Christian is vacant.

This could open the door to a crisis with regard to the National Pact, which could be translated into the Christian MPs boycotting the parliament sessions. This is likely to increase sectarian tension in the country.

It should be noted that Sunni MPs, who are mostly affiliated with the Future Movement, previously boycotted the parliament sessions when former Prime Minister Najib Mikati’s government resigned nearly a year ago, under the pretext that the post of the prime minister — always held by a Sunni — was vacant.

The same thing might happen in the government, which might lead to the withdrawal of the Christian ministers. This step is reminiscent of what happened in 2006, when the Shiite ministers withdrew from the government in objection to the inauguration of the Special Tribunal for Lebanon. This withdrawal aimed at overthrowing the government by changing its sectarian balance established under the National Pact. In accordance with the constitution, the president of the republic heads parliament’s sessions, but after the Taif Agreement of 1989, he is not allowed to vote. It is true that his presence is not mandatory according to the constitution, but the vacancy of the Christian position is contradictory to the consensual foundations upon which the rule is based. As a result of a vacancy, governmental decisions will become subject to appeals. Will the 2006 scenario repeat itself, but this time, on the Christian scene?

The obstruction of the presidential elections is haunting this small country, which finds itself drawn into a vortex pulling it more and more into the deep crisis it is trying to get out of. The governmental crisis has barely ended and new challenges have already risen. The security situation is more fragile due to the war raging in Syria, the Syrian refugees crisis that has gone beyond all expectations and the regression of the economic situation due to explode at any time. The last thing Lebanon needs now is a presidential vacuum and the paralysis of its institutions. Will the people wake up and rely on the logic of consensus that is based on the respect of institutions, to settle the disputes? Will they give up?

In the past, it has been customary for Lebanese politicians to wait for a foreign hand to be extended at the last minute to save them from suicide. But this time, foreign hands may or may not be extended, since foreign states and parties are busy solving other numerous crises, ranging from Syria, to Iraq and Yemen. It seems Lebanon is not at the top of their priorities.