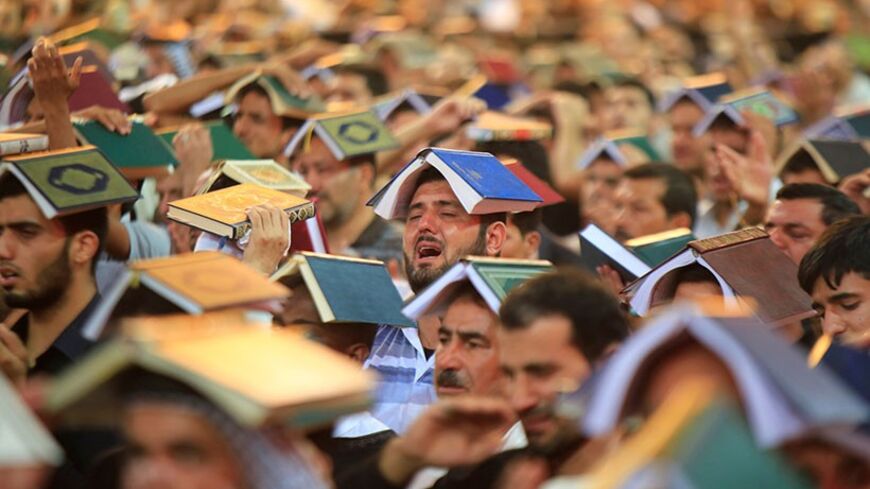 Shiite men place copies of the Quran on their heads during a ceremony marking the death anniversary of Imam Ali at his shrine in the holy city of Najaf, July 30, 2013. - REUTERS/Ahmad Mousa

Iraq has a long history of conflict and rapprochement between Sunni and Shiite clerics, which has played a major role in the sectarian conflict or cohesion among the country’s sects. This factor, among with other political and social factors, has defined the historical conflict in Iraq. The main problem is that Sunni and Shiite clerics are unable to achieve a real rapprochement and establish a network of communication that can be used to reach a solution or alleviate tensions. Instead, they have fueled the conflict in many instances due to the lack of formal communication.

Researchers can find many types of communication in the history of Shiite and Sunni clerics in Iraq. For instance, Shiite clerics have been taught by Sunni teachers and vice versa, and peaceful and calm discussion and dialogue councils have been established. However, friendly relations turned into conflict and enmity as soon as political complications set in between the two sects. What is joined by cultural relations can be separated by political disputes overnight. When political disputes come into play, they spark religious conflicts and make each party evil in the eyes of the other. Mutual accusations fly and all communication is cut off.

The policies of the regime of deposed President Saddam Hussein, especially following his religious campaign in the 1990s, widened the rift between Sunni and Shiite clerics. Salafist currents began to exploit the religious openness of the country to enhance their activities and reach, which only added insult to injury. On the other hand, the rise of political Islam among Shiite clerics bred Shiite Salafism that competed, rather conflicted, with its Sunni counterpart.

There were several attempts after 2003 to patch things up between both parties, including holding common prayers for Sunni and Shiite scholars and reconciliatory conferences that joined religious and social figures from both sides. However, all these attempts just made things appear better on the surface and did not really mend the broken ties.

Simply put, Sunnis and Shiites each consider the other part of a dangerous political project that threatens its identity and the future of its sect. Sunnis think that there is a Farsi-Shiite project that aims to eradicate Sunnism and Arabism from Iraq, while Shiites fear a Sunni-Wahabi-Saudi project that would oppress the Shiite majority in Iraq.

Al-Monitor learned about the obstacles that the Iraqi Council for Interfaith Dialogue has faced in its attempts to open a window for ongoing communication between Shiite and Sunni clerics, despite the efforts of the council.

Amina al-Zahabi, a media relations officer for the council, told Al-Monitor, “It is easy to gather Shiites or Sunnis with people from other religions, but it is hard to put them together, although they both descend from Islam. As a matter of fact, they do not feel threatened by Christian clerics or Mandeans, but they take a defensive attitude as soon as they meet a cleric from the opposing Islamic sect.”

Despite this animosity, the council managed to bring Sunni and Shiite clerics together in consecutive sessions. The imam of the Sheikh Abdul-Qadir al-Gilani Mosque, Sheikh Mahmoud al-Issawi, an influential Sunni figure in the Sunni-Sufi community, officially joined the council. The council members recently visited the Al-Azamiya neighborhood, the most important Sunni hub in Baghdad, to meet with the imam of Abu Hanifa mosque, Sheikh Abdel Sattar Abdul Jabbar. It is noteworthy that last October, this region witnessed a provocative march staged by an extremist group that insulted holy historic Sunni figures, fueling the sectarian strife there. The arrest of Sheikh Abdel Sattar, shortly after the march, exacerbated the situation.

Sheikh Abdul Sattar told Al-Monitor that Shiites and Sunnis coexist peacefully in Al-Azamiya and that he had been the first to visit Najaf to meet Shiite scholars after 2003. He said, “The authorities separate us and push us to be religiously biased. We demand bigger interaction from the Shiite scholars because authorities are persecuting us.”

To learn about the perspective of the Shiite party, Al-Monitor met with Jawad al-Khoui, a Shiite cleric and one of the founding members of the Iraqi Council for Interfaith Dialogue.

“We laid out our concerns to Sheikh Abdul Sattar, and we discovered that we share the same concerns. The current persecution is not initiated by one sect against the other only. All Iraqi citizens are suffering from the security and political problems weighing the country down,” Khoui noted.

“We need to be persistent in our dialogues and increase our common grounds. Najaf’s doors are open to our Sunni brothers who visit,” he added, repeating Shiite leader Ali al-Sistani’s words, “Sunnis are the same as Shiites, not only their brothers.”

The elections on April 30 showed that the political spectrum is becoming more diverse and less directly dictated by sectarian tensions. In fact, Shiite scholars were divided between supporters and opponents of the policies of the mostly Shiite government. Sunni scholars were also divided, as some supported Sunni political currents that stand with the current government while others supported currents that oppose it. This means that the sectarian conflict was relieved of political pressure, which might pave the way for intensifying communication between Shiite and Sunni scholars.

However, these communications lack a formal relationship that cannot be easily broken as soon as another wave of sectarianism or political conflict breaks out in the country. Therefore, communication should be organized within a civil institution, like the Iraqi Council for Interfaith Dialogue, which would gradually become a comprehensive entity that works within the organizational framework of Iraqi society.