President Hassan Rouhani has defied the judiciary's orders to block WhatsApp in his ongoing campaign to expand his base by opening up the Internet. 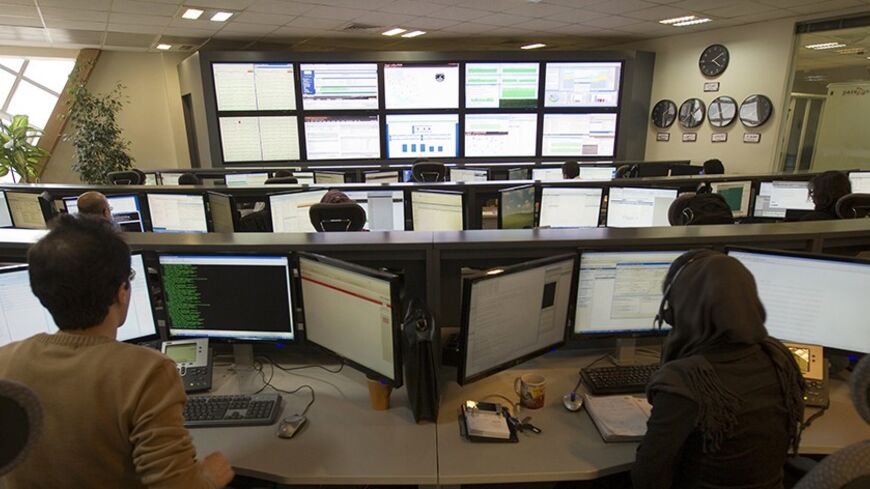 Conflicts over Internet filtering and citizen involvement online has once again reached the highest levels of power in Iran. The president, head of the judiciary, the prosecutor-general and a number of right-wing media outlets have openly addressed the situation, with most of the criticism aimed at President Hassan Rouhani.

The recent round of disagreement over the presence of Iranians online began May 17 during the National Communications and Information Technology Festival. Rouhani defended the Iranian people's online activity and criticized the harsh policies of imposing limitations on the Internet. "In this country, we recognize our citizens' right to connect to the World Wide Web," he said. "We do not actually come face-to-face with other people. Yet, the effects of cyberspace are quite visible on society and the country. It even influences people's lifestyle."

The presence of Iranians online and Internet censorship were issues heavily discussed by Rouhani while campaigning for the presidency. On June 6, 2013, he said, "The current Internet bandwidth [available] is not what the Iranian people deserve," adding, "Today we live in a world of communication. Unfortunately, however, some people think they are living in the 19th century."

Ali Honari, a sociology lecturer in Amsterdam University who has focused for the past five years on the role of social networks in mobilizing forces in Iran, told Al-Monitor that one reason Rouhani has focused so heavily on online participation is that he lacks an actual political party or base. "The 2013 presidential elections clearly demonstrated the role that the social networks and various groups that are active in them played in Rouhani's victory,” he said. “In the absence of Reformist election headquarters, street campaigns were organized using the Internet and social networks. They used different methods of online campaigning, changed the atmosphere of the society during the final weeks and convinced a lot of people that they should participate in the election."

Rouhani wants their support not only to further his own policies but also to prevent them from losing interest in his administration, said Honari. "The safest and the least problematic yet influential method of political participation is online participation,” he said.“If cyberspace is also taken away from the critics, then Rouhani’s supporters, including the members of the Green Movement and the Reform Movement, will have no opportunity to participate in politics. This will weaken Rouhani's administration."

Rouhani as of late has been using public speeches and addresses to the people to promote his position on the Internet. It is noteworthy that the Islamic Republic of Iran Broadcasting (IRIB), headed by Ezzatollah Zarghami by appointment of Iran's supreme leader, canceled live coverage of Rouhani's speech in which the president said, “The era of dictatorship and delivering messages from one-sided megaphones, one-sided pulpits, one-sided and traditional tribunes is over.”

The word "pulpit" was a direct criticism of the conservative clerics of Iran. It is therefore not surprising that only four days later the head of the judiciary, Ayatollah Sadegh Amoli Larijani, in a meeting with high-ranking judiciary officials, questioned Rouhani's position on the Internet. Although he did not mention the president by name, he chose to remind the “officials,” in an advising tone, to “use logical and acceptable words when talking about the Internet, cyberspace and other cultural issues and not to get overexcited and emotional so that a proper solution can be formulated.” He added, "Those who do not agree about the poison of the Internet do not know cyberspace.”

The conflict between the judiciary and the executive branch of the government went beyond words when Rouhani’s Communication Minister Mahmoud Vaezi refused to block the social media website WhatsApp. Gholam-Hossein Mohseni-Eje'i, the spokesman for the judiciary, directly accused Rouhani and Vaezi of having acted “unlawfully” by refusing to carry out the February 2014 ruling by the Committee for Determining Criminal Web Content (CDCWC) to block WhatsApp. The CDCWC is headed by Mohseni-Eje’i, who is also the prosecutor general.

Vaezi refused to block WhatsApp, saying, "Until the time that we have a replacement for these social networks, the administration opposes filtering those networks that are not destructive and do not injure public morality."

The CDCWC was founded in 2009 after the Cyber Crime Law was passed by the eighth parliament and approved by the Guardian Council. Members of this group operate under the supervision of the prosecutor general and are responsible for monitoring the Internet and filtering websites with criminal content.

While Rouhani has no control over the CDCWC, he can use his influence in the other organization responsible for monitoring the Internet, the High Council of the Cyberspace (HCC), to further his reform-minded agenda.

While the CDCWC, headed by Mohseni-Eje'i, and the HCC, headed by Rouhani, appear to have overlapping functions, they operate differently.

“The high council headed by the president is a policy-making organization and does not interfere in the executive process,” Shirzad Abdollahi, a political analyst living in Tehran told Al-Monitor. “On the other hand, the Committee for Determining Criminal Web Content, which is headed by Mohseni-Eje'i, has a more executive role and is responsible for filtering different websites.”

Abdollahi believes that based on these functions, “The committee should follow the orders of the high council.” However, he added that there will continue to be conflict over how these two bodies cooperate and clash, especially where, as the WhatsApp saga revealed, the communications minister has an executive role as well.

Tthe major right-wing publication Kayhan also entered this dispute when it published an editorial by Ahmad Shafieepoor (possibly a pseudonym). The writer talked about "the law," emphasizing that filtering is the responsibility of CDCWC, and said, “It is clear that legally, the judiciary has the final word on whether the content of a certain website is criminal or not and whether it should be filtered. The opinion of the honorable president and the opinions of the ministers of culture and communication regarding these social networks can only be considered as a suggestion.”

Supreme Leader Ayatollah Ali Khamenei, who has the final say on all state matters, has not directly expressed an opinion on the issue yet. However, he chooses Kayhan's editor, whose opinion was expressed above, and the judiciary, which is politically aligned with the supreme leader, and both have so far opposed Rouhani.