Turkey’s Prime Minister Recep Tayyip Erdogan, responding to critics who label him a “dictator,” can improve his image by giving up practices that generate criticism. 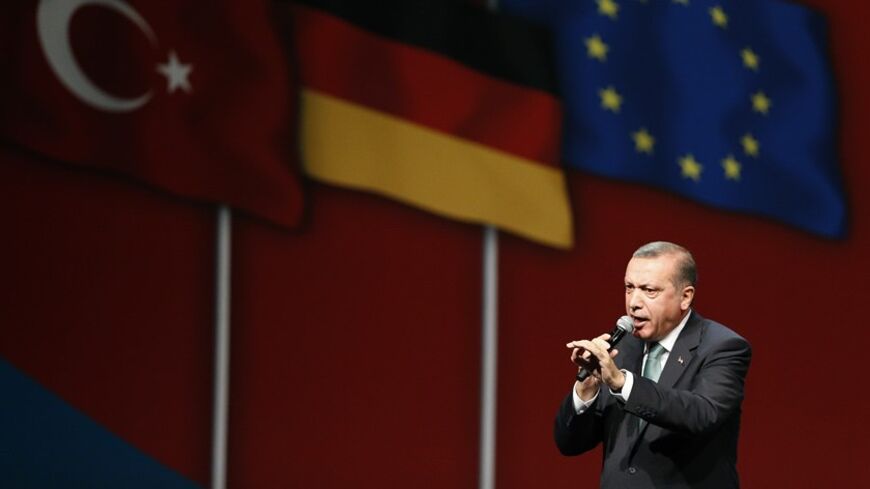 Turkey's main opposition leader and his spokespersons accuse Prime Minister Recep Tayyip Erdogan of becoming dictatorial. Erdogan sees this as an unfair accusation and keeps saying he is not a dictator. In his defense he provides examples of what could happen to his critics if he were really a dictator.

The latest incident of this type was at the general assembly of the Union of Chambers and Exchanges (TOBB) in Ankara on May 22. Erdogan, while addressing the TOBB meeting with hundreds of generally conservative, small and medium Anatolian entrepreneurs in attendance, brought up the accusations of “dictatorship” and said, ”The TOBB chairman in his speech referred to calm and order. Look, there’s an opposition that calls the prime minister of this country a dictator. There are people who freely use this expression.”

Erdogan then pointed at Kemal Kilicdaroglu, the chairman of the main opposition Republican People’s Party (CHP) who was sitting in the front row, and said, “Now they are facing me here.” The audience applauded and cheered.

A smiling Kilicdaroglu was seen on TV screens as approving what Erdogan had said.

Erdogan, after waiting for calm in the hall to return, turned his gaze angrily to Kilicdaroglu and with an indignant tone shouted, “Tayyip Erdogan is going to be a dictator and you are going to walk around in plazas, is that right? You can’t do that in a country with a dictator. But you are disturbing the peace of the country with such accusations. You should first hear what comes from your mouth.”

When it was Kilicdaroglu's turn to address the meeting, Erdogan and his entourage walked out of the hall.

In an address on Aug. 20, Erdogan said, “Without shame they are talking of dictatorship. In a place where you have dictatorship nobody can utter that word. You won’t have newspapers, magazines, TVs. They will string you up, as in Egypt.”

In another speech at Trabzon Airport, Erdogan alluded to Syrian President Bashar al-Assad by saying, "Those who call me a dictator are welcome to [go to] Syria. You want to see a dictator? He killed 100,000 people in 2½ years."

The label of dictator that the Turkish opposition affixes to Erdogan is debatable in terms of political science, but no doubt such accusation is based on rapidly oppressive characteristics of Justice and Development Party (AKP) rule.

Just as the accusation of dictatorship is problematic, so is Erdogan’s defense. For example, stringing up the opposition is not a prerequisite for being a dictator. Why shouldn’t it be feasible for an elected leader to become a dictator without stringing up his opponents? In our times, there are more sophisticated ways of suppressing opponents than hanging them.

In addition, if you are allowed to call a dictator "a dictator," this doesn’t mean he is not a dictator. Erdogan, when reacting to accusations of dictatorship, uses the argument that he is not applying any of the brutal oppressive methods of uncompromising dictatorships. Of course, Turkey is not North Korea and never will be.

Instead of saying that because he doesn't hang his opponents, he therefore cannot be classified a dictator, perhaps it would have been more persuasive if he had complained that he couldn’t do all he wants because of the obstructions placed on his way by high judicial organs such as the Constitutional Court and the State Council.

We have to remember that the Constitutional Court recently took two decisions that infuriated Erdogan. On April 2, the high court decided that the Twitter ban imposed by Erdogan on March 20 was in contravention of constitutional rights and must be annulled. Erdogan reacted by saying, "I don’t respect the court's decision. I don’t find it national.”

Then on April 12, the Constitutional Court annulled the relevant clauses of the Law on Supreme Council of Judges and Prosecutors that on Erdogan's request had given extraordinary powers to the minister of justice.

If Erdogan had been a true dictator, a court would not have dared to challenge his will like this.

Right now, Erdogan doesn’t have the power to reshape the high court the way he wants. But below the high judiciary, at normal judicial levels, his government directly and strongly interfered by reassigning hundreds of judges following the Dec. 17 graft operations and blocking investigations.

Erdogan isn't yet a dictator, and there is still some way to go for him to become one. But he definitely isn't a democratic leader.

In short, we face a “gray phase.” What is menacing for Turkey's stability and the region is gradual change from gray to black. While this process is going on, the global image of Erdogan, his party and sadly of Turkey is crashing. We have to admit that the key proponent of the image destruction is Erdogan’s attitude of restricting media freedoms.

The most striking development of late that really upset the Erdogan government is the classification of Turkey as a country where the press is "not free,” as reported by Freedom House in its annual report on press freedom released May 3. Last year, Turkey was in the category of “partially free press” with 56 negative points (out of 100). In one year, Turkey acquired 6 additional negative points and with a total of 62 was demoted to the "worst category."

Karin Deutsch Karlekar, the director of Freedom House's Press Freedom Project, lists four reasons why Turkey was further demoted: Many journalists were fired or forced to resign under systematic government pressure because of their critical reporting and comments; police violence was present against journalists during the performance of their duties; as of Dec. 1, 2013, 40 journalists were in prison; and the Internet was censored.

A significant sample of how Erdogan’s image in the world has crumbled in one year was the words of Hannes Swoboda, the chairman of the Socialist Group of the European Parliament, printed in the daily Hurriyet on May 12. Swoboda said, “Erdogan is an autocrat.”

Here, one must remember that the same Swoboda in a joint press conference with Kilicdaroglu on May 15, 2013, in Brussels had reacted harshly to the CHP leader’s comparison of Erdogan with Assad. Kilicdaroglu had said that there is only a slight difference of tonality between Erdogan and Assad: “Both are oppressive, both have their own media, both have their special courts.” Swoboda in a written retort declared: “Although his policies may be legitimately criticized, Erdogan cannot be compared with Assad who is still waging war and terror against the Syrian people.” When Kilicdaroglu did not rectify his language, Swoboda canceled his scheduled meeting with Kilicdaroglu. This was two weeks before the Gezi Park protests. But Erdogan’s extremely negative reaction to Gezi wiped out his standing in the West.

Today, Swoboda, when asked how he can describe Erdogan, said, "He is an autocrat. He is an autocrat who is trying to amend the constitution and legislation to serve his interests. The language he uses against his opponents in the country and the European Union is typical autocratic language. He is a kind of leader in the same class with the Hungarian Prime Minister Viktor Orban. Both are using the system and legal system to reinforce their own powers in ways that can’t be done in democracies. Of course Orban is not Assad. Perhaps you can best compare him with [Russian President Vladimir] Putin. New brands of autocrats are of different sorts. Their main aim is to control all institutions, the judiciary and media.”

Hence, Swoboda maintains his consistent stand of a year ago. He doesn’t compare Erdogan with Assad and doesn’t call him a dictator but an autocrat.

Of course, there is a relative difference between “an autocrat” and “a dictator.” While Erdogan and his close associates are trying to strengthen their authoritarian governance, they have been incapable of preserving their image for more than a year. Neither go together. Erdogan can’t manage this contradiction.

The collapse of image with its inevitable moral, political and economic costs will be a high price for Turkey to pay, while making Erdogan’s persistence with this authoritarian regime more difficult.