Turkey’s Syria policies were not wrong, but poorly presented. 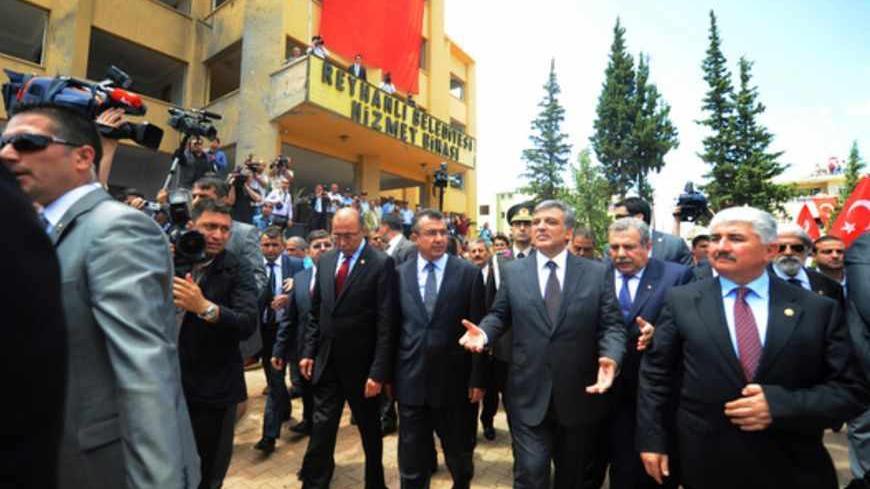 Turkish President Abdullah Gul waves as he visits the bomb scene on May 16, 2013, during the funerals of the victims of a car bomb that went off on May 11 at Reyhanli, just a few kilometres from the main border crossing into Syria. - BULENT KILIC/AFP/Getty Images

The Syrian issue has not only lead to qualms over and criticism of Turkey’s Middle East policy that has otherwise been praised in recent years, it has also poisoned the country’s domestic politics. In the latest example, Prime Minister Recep Tayyip Erdogan and main opposition Republican Peoples Party (CHP) leader Kemal Kilicdaroglu are going to court over of their opposing views on Turkey's Syria policy.

For two politicians to insult each other with vulgar language and for them to differ widely over Syria may not be anything new, but after the May 11 bombings in Reyhanli, their polemics became severe. Erdogan blamed the Syrian regime and President Bashar al-Assad, whom he calls a "dictator" for the Reyhanli attacks, and Kemal Kilicdaroglu held Erdogan’s “wrong Syrian policy" responsible for spilling the blood of Turkish citizens and labeled Erdogan the "dictator" and a “murderer.”

Kilicdaroglu’s words did more than just anger Erdogan, who was in Washington at the time to meet with US President Barack Obama. Chairman of the European Parliament’s Socialist bloc, Hannes Swoboda, canceled his meeting with Kilicdaroglu on the grounds that he could not accept that such adjectives be used for “an elected prime minister," thus delivering a heavy blow to the legitimacy of his comrade from Socialist International.

Prime Minister Erdogan, in a May 20 press conference immediately after landing in Istanbul airport, said he doesn’t want to talk to Kilicdaroglu and declared that he will sue him.

It is not very clear whether Kilicdaroglu, who is of Alevi (Alewite) origin like Assad, was reacting bitterly to Erdogan over Syria because he sees the prime minister as a representative of the "Sunni rule” that Alewites for time immemorial have considered their oppressor. But we know that the CHP sent several delegations to Assad and appeared to stand in solidarity against Erdogan. The government that is trying hard to justify its Syria policy with Turkey’s national interests cannot accept Kilicdaroglu’s attitude.

Kilicdaroglu’s branding of Erdogan as a "murderer” because of the Reyhanli bombing has cast shadows on his credibility and prompted denunciations from many quarters. But in parallel, the Erdogan government’s Syria policy has been coming under increasingly sharp criticism.

Although there are many elements of Erdogan and Foreign Minister Ahmet Davutoglu's Syria policy that can and should be criticized, the criticism voiced from inside Turkey come from the wrong starting point and in general are unjustified.

Two articles that appeared in successive days from two very diverse origins point to the unjust basis of this criticism.

The first article was by Joost Lagendijk and appeared in Today’s Zaman on May 22. Under the title, “Turkey’s Syria Policy Criticized for Wrong Reasons," it says: “Turkey’s failure to convince US President Barack Obama that the US should support Syrian rebels with weapons and use its military might to establish a no-fly zone has led to a new round of criticism of the government’s Syria policy in the Turkish press. Erdogan and Foreign Minister Davutoglu are, again, blamed for their active support of the Syrian opposition and for the violent reactions the car bombs in Reyhanli have provoked.”

Up to this point, he is in harmony with the points we have been making in Al-Monitor for some time.

Following these remarks are the writer's particularly noteworthy and articulate views: “Many of the most outspoken critics are, however, unconvincing because they don’t come up with any alternative other than settling for a new version of Turkey’s pre-2002 unattached and uncommitted regional strategy, or they make the argument for some sort of appeasement policy that simply overlooks the 80,000 Syrians that have already been killed.”

Lagendijk is a prominent Greens politician of Dutch descent who for long years was the co-chairman of the EU-Turkey Joint Parliamentary Commission of the European parliament. He is now a researcher living in Turkey. During his tenure in the European parliament, he was known both as a friend of Turkey who freely voiced criticism of the country and as an advocate of Turkey’s integration into the EU. As a left-leaning Green, he has no reason to sympathize with Turkey’s pro-Islamic government.

His following comments — which the writer of this article fully agrees with — reflects his critical approach to the Erdogan government’s Syria policy:

“Since the uprising against Assad started in 2011, I have been surprised by the ability of most pundits to criticize the Turkish government for the wrong reasons … the Justice and Development Party should be blamed for three mistakes: One: Being too uncritical of the Assad regime, which was guilty of massive human rights violations long before the spring of 2011. Two: Being too confident that they could persuade the Syrian president to give in to democratic demands. Three: Being too optimistic, as were many others, that Assad would fall quickly.”

And he makes what I see as a truly fair appraisal: “After all these errors and miscalculations were exposed in 2011, Erdogan and Davutoglu radically changed track and became some of the most vocal opponents of the Syrian dictatorship. This could be criticized as opportunistic and was not well prepared or communicated. But was it the wrong policy? I don’t think it was.”

I don’t think it was, either.

However, it seems Iranians have a different opinion. For them, it was the wrong policy. On May 21 in Eurasian Review's Iran Review, an op-ed appeared under the title "Iran Viewpoint: The Price That Turkey Is Paying,” written by Shuaib Rahman. Shuaib Rahman is a senior researcher and member of the editorial board of the think tank Iran and Eurasia Research Center, and articulates the views and policies of the Iranian regime.

The article starts by saying, “Since the ongoing crisis in Syria began, positions taken by the Turkish government on the Syria crisis have raised many questions and, of course, ambiguities among the analysts … As times goes by, it becomes more and more clear that by taking incorrect positions on Syria, the government of Turkey has made great strategic mistakes and, as a result, has suffered hefty costs both in domestic and foreign policy.”

The article notes that the United States does not support the Turkish government’s demand for a no-fly zone, that NATO is not willing to give weapons assistance to the opposition in an Arab country, that Erdogan’s policies are facing opposition in Turkey and that Turkey’s stability was in peril. In a nutshell, he is saying that Turkey could not get the support of its Western allies in Syria.

The article concludes by saying, “It seems that Turkey has been left alone in the region with a great deal of domestic and foreign problems to deal with,” conveying Iran’s views that Turkey is actually having hard times over Syria for reasons it is not directly responsible for. The thrust of the article is that the mistake resulted not from the cause but from the effect.

The way to avoid that was for Turkey to maintain its pre-2002 obsolete and anachronistic regional policy. Would this be a sustainable and "right" policy, politically and morally?

I doubt it, and so should everyone else.