Turkish Prime Minister Recep Tayyip Erdogan might have crossed a red line by accusing the CHP of being directly responsible in the May 11 Reyhanli blasts that left 52 dead. 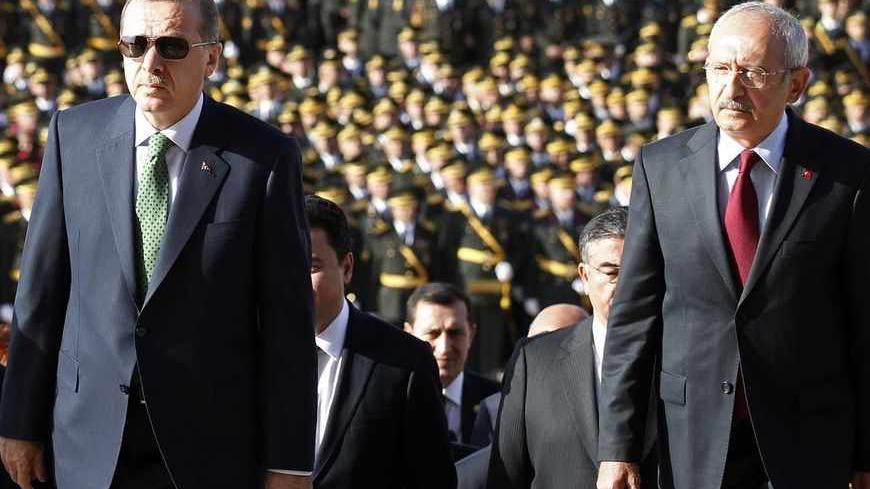 "We do not see Syria as a foreign problem; Syria is our domestic problem because we have an 850-kilometer border with this country, we have historical and cultural ties, we have kinship," Turkish Prime Minister Recep Tayyip Erdogan said in August 2011, days before his foreign minister, Ahmet Davutoglu, paid his last visit to the Syrian capital to meet [Syrian President] Bashar al-Assad. Upon Davutoglu’s return, Erdogan decided there was no chance left to work for a solution with Assad, and announced that toppling the Syrian regime had become state policy.

The Erdogan government today, however, claims that the main opposition Republican People’s Party (CHP) is playing a dirty game and exploiting the Syrian crisis domestically by pushing a sectarian-oriented policy in Turkey. Erdogan even went so far as to accuse CHP leader Kemal Kilicdaroglu of being responsible for the May 11 terrorist attack that left 52 dead in Reyhanli, a town on the Syrian border. For his part, Kilicdaroglu also holds Erdogan responsible for the deaths in Reyhanli. There is, however, a significant difference between these two accusations, although both are equally distasteful.

The first question to be asked is this: Has Erdogan crossed a red line with his accusations of Kilicdaroglu? “The person who guided the CHP delegation to Damascus twice is the exact person who planned the Reyhanli blasts as well as the bomb attacks, killings and hijackings at the border camps,” Erdogan said on Tuesday, May 28, at his party’s weekly parliamentary group meeting. “A journalist working at a daily paper close to the CHP, who is now under custody, had been in close contact with this individual and had leaked him documents and information. A close relative of one of the CHP deputies is involved in these dark scenarios.” Erdogan went on to claim, “The CHP chairman’s numerous disgraceful and shameless attacks are aimed at covering up what happened at Reyhanli. Kilicdaroglu should immediately present his resignation.”

Turkish media and many analysts interpreted these remarks as Erdogan holding Kilicdaroglu directly responsible for the Reyhanli blasts. The Turkish prime minister also said that the Turkish Intelligence Organization (MIT) had been monitoring this suspect for some time, which leads to the question whether the MIT had the responsibility to warn the CHP that the person it was working with was implicated in preparations to carry out attack(s) in Turkey. These are strong charges, and they beg close scrutiny. Yet, the media as well as ordinary people on the street can only be confused about what’s really going on at the border area, and whether the CHP has done anything wrong of  that magnitude. Many analysts and columnists in the media are not convinced that the CHP could have taken part in such a heinous crime on Turkish land.

The CHP delegation’s visit to Damascus could be open to debate, though, and could be politically damaging. That, however, is a separate issue from accusing the CHP of being in collusion with Syrian regime forces to carry out a terrorist attack on Turkish soil.

On the other side of the coin, Kilicdaroglu holds Erdogan directly responsible for the 52 deaths in the May 11 Reyhanli explosions. “One who trains the terrorists in Turkey, gives them arms and money and sends them to Syria should be called the leader of a terrorist organization. Recep Tayyip Erdogan has taken on this role,” Kilicdaroglu said on Tuesday, May 28, at his party’s parliamentary group meeting. “If [Erdogan] were to have any conscience — morality — he would have resigned.”

There are a few points that differentiate Kilicdaroglu from Erdogan:

As much as Kilicdaroglu’s rhetoric is also problematic, he is basically arguing that Erdogan’s Syria policy made Turkey vulnerable to terrorist attacks. He is questioning the wisdom of arming, training and sending Syrian opposition members from Turkey to fight against the Assad regime. What Kilicdaroglu does or says, however, is irrelevant to what is going on in Syria. Moreover, it’s mind-boggling to even consider that the CHP deputies helped and cooperated with Syrian regime members who allegedly carried out the attack in Reyhanli. These are not the same kind of accusations. Based on these accusations, however, one can speculate as to whether the Erdogan government is preparing to take any legal action against the CHP — something that could cause the party to be shut down.

The fact of the matter is, however, that two years have passed since Turkey announced ousting Assad as a state policy — and Assad is still in charge. “Ankara unfortunately presumed that Assad would be ousted in less than six months. We did not understand the calculus well in the region,” Ilter Turkmen, one of Turkey’s former foreign ministers, told CNNTurk on Wednesday. “We must have known that this is a minority ruling the country. They have been working on this scenario for 40 years thinking, ‘So what do we do when people rebel against us?’”

Erdogan government officials simply miscalculated Assad’s departure date from Syria. Just as their engagement with him in the beginning was flawed, they went too far too soon to break ties with him, and put Turkey in a corner that made it difficult to protect its territory. When Erdogan said Syria is our domestic policy, he defined Turkey’s national interest in a way that has no precedent. Today, people by and large don’t want to be part of this civil war at their doorstep, and want the government to steer away from taking any further risky steps. So far, Erdogan is also cautious, but his unfounded accusation of the CHP may be a sign reflecting how frustrated he might be feeling about this domestically, as well.