Egyptian officials are focusing on their own politics for now, while expecting a protracted conflict in Syria. 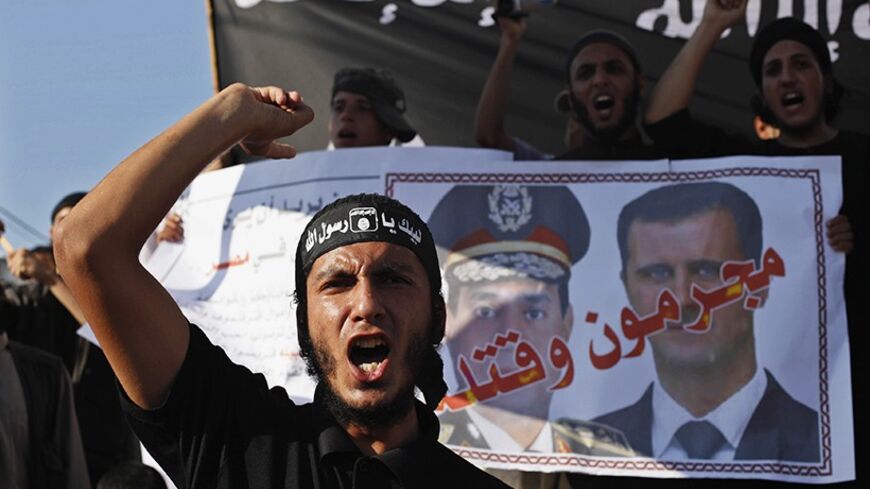 CAIRO — The next meeting of the Friends Of Syria is scheduled for May 15 in London. Egyptian Foreign Minister Nabil Fahmi, however, will not attend, as it seems a previous engagement in Bratislava cannot be broken.

In any case, Egyptians don’t expect much from the London conference. The agenda — increasing humanitarian assistance to the long-suffering Syrian people and railing against President Bashar al-Assad’s expected victory in the upcoming elections, excite little interest or enthusiasm. More broadly, there is nothing much to get excited about in the Western-managed process.

One well-informed Egyptian diplomat said, “US officials tell us openly, ‘We do not have a policy on Syria.’ In fact, they don't have to tell us. This is not meant as a criticism. It is simply a fact. There is no policy.”

Abdel Fattah al-Sisi himself sets the tone for Egypt’s Syria policy, explaining recently to Sky News Arabia, “We have to find a peaceful exit as a solution.”

Egyptians remain equally unimpressed with the campaign against Assad’s re-election and the dim prospects of a successful military effort to oust the regime. Those condemning Assad’s expected victory have long been reconciled to negotiating with him, so why focus on it? Cairo believes that elections should not be used as an excuse to stop the diplomatic process.

The long-expected resignation of UN and Arab League envoy Lakhdar Brahimi illustrates the sober reality of disarray in the camp of Assad’s opponents.

Saudi Arabia is preoccupied by internal jockeying for succession. Without Saudi Prince Bandar bin Sultan, there is less decisiveness. But even with him, the Saudi strategy did not work.

Some officials in Cairo, however, are keen to know more about the joint Russian-Iranian discussions on a new post-Geneva international framework. Iran has suggested a four-point program, including a cease-fire, the formation of a national unity government and constitutional reform including a reduction in the powers of the president — all followed by national elections.

Egypt wants in, but Cairo cannot begin to reassert its traditional leadership prerogatives in the foreign policy arena until its own presidential elections re-establish the presidency as an active center for policymaking.

“Egypt is still in tumult,” explained a close Egyptian observer. “There is currently no active presidency in any policy arena. Institutions like the police and security are, as a consequence, carving out their own fiefdoms. It will not be easy or quick to re-establish central control [after elections], “ he cautioned, “or to know even if it is possible.”

The regime-led agreement on Homs is viewed as a major boost for the system. “At this point, all areas of urban Syria are under regime control,” explained an expert with extensive experience in Damascus. “Historically, he who controls Syria’s cities controls Syria.”

The first of these understandings was negotiated in late 2011 in Zebadiyya by Assad’s brother-in-law Awsaf Shawqat. Since then, Damascus has faced a kaleidoscope of rebel and local factions, a growing number of whom have been forced to end their armed opposition. There is no symmetry to such undertakings. The results reflect the regime’s ability to present a coherent system represented these days by local governors, ministers and Assad’s younger brother Maher against disparate opposition groups with no ability to act coherently.

There have been many agreements, but Homs represents the most complex understanding, involving not only that city but also the associated release of prisoners in Aleppo. In this case, the Islamic Front was the first rebel faction among equals. The UN also played a role, but Syrian elements were clearly in the lead.

Until now, it has been outgunned rebel factions that have sued for peace, but there are areas where the regime itself may decide to consolidate its losses. Officials in Cairo do not discount something similar happening in areas under regime control — in the Idlib region, for example.

The prevailing view in Cairo is that developments along these lines, however significant, will not end the war. One Cairo resident explained, “They represent a consolidation of the battlefront and thus the de facto division of Syria.”

Close observers in Cairo view with skepticism the latest preoccupation with arming the rebels with anti-aircraft weapons. "The regime is only capable of flying 30 or so sorties daily. In that sense, airpower is not a decisive element in their strategy. Antitank, not antiaircraft, weapons are potentially more important for the opposition.”

A preoccupation with battlefield developments does not begin to address the broader requirement for creating a mechanism supported not only by Syrians but also the external players whose clashing interests have done so much to fuel the conflict.

“These [local] arrangements represent a major military victory for the regime, and the terms of the surrender favor the regime,” one official explained. “No matter what happens internally, however, the balance of power still exists, and the external parties will not permit a solely Syrian solution, even if one could be reached. Assad the father worked tirelessly to establish this kind of Syrian sovereignty. However, it has been lost and is probably irretrievable." Egypt never believed in the removal of Assad. Today, it is also an illusion that he can restore the pre-war status quo.

Claims of a regime victory are viewed with great skepticism.

“Notwithstanding the Iranian comments in The Guardian, we still cannot see the end of this. We are now at 150,000 dead, the same number that fell during more than a decade of civil war in Lebanon. Today, there are more Syrian Sunnis in Lebanon than Lebanese Sunnis,” explained a diplomat

Cairo’s cold realism has yet to be matched by the rebels’ various patrons, many of which nonetheless maintain a diplomatic presence in Damascus. The Czech ambassador, however, is Europe’s only remaining full-time envoy.

But security issues are increasingly being trumped by the campaign to isolate and delegitimize the regime. “We do not rule out military cooperation on jihadis and security issues,” one well informed Egyptian source explained. “There is definitely some sort of intelligence cooperation.”