The State Department received some praise from Capitol Hill after upgrading the Syrian opposition's status and releasing an additional $27 million in nonlethal assistance. 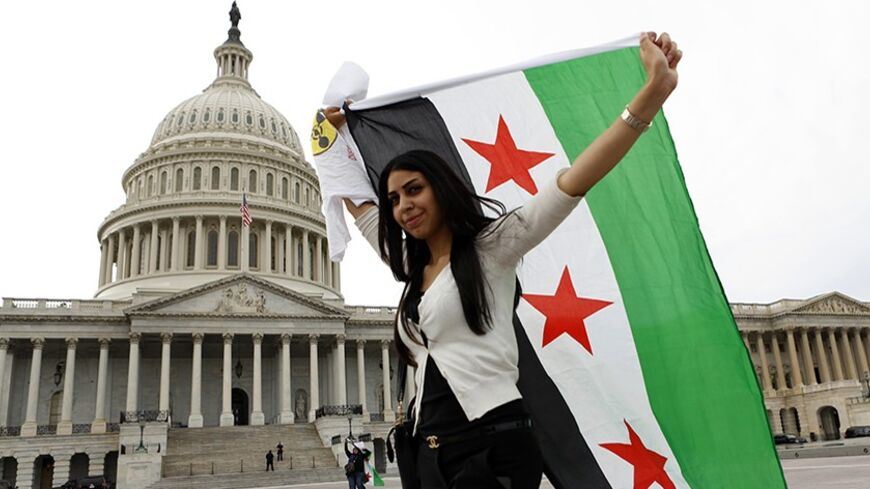 An anti-Assad protester carries the Syrian freedom flag in front of the US Capitol in Washington, Sept. 9, 2013. - REUTERS/Kevin Lamarque

The Obama administration on Monday granted "foreign mission status" to the Western-backed Syrian Opposition Coalition (SOC)'s Washington offices and announced the release of $27 million in nonlethal aid to rebel forces, bringing the total US commitment to $287 million.

The move was timed with the first official visit of coalition President Ahmad Jarba and earned some praise from Capitol Hill, where some lawmakers of both parties have grown increasingly frustrated at the administration's reluctance to get involved more deeply in the three-year conflict.

The opposition's representative offices in Washington and elsewhere in the country now gain status as "foreign missions."

The designation "will allow us to formally facilitate banking and security services for the coalition offices in the United States," State Department spokeswoman Marie Harf said at Monday's briefing, as well as "facilitate their outreach to the Syrian diaspora in an increased way in the United States as well."

"This is not, obviously, tantamount to recognition of the SOC as the government of Syria," she said. "It's a reflection of our partnership with the coalition as the legitimate representative of the Syrian people."

Jarba, who arrived in the United States on Sunday, applauded the news.

"This is an important step in the path toward a new Syria, its recognition on the international stage, and its relations with Syrian nationals in the US," he said in a statement. "The new status provides a diplomatic platform for the coalition to advance the interests of the Syrian people at all levels. This is a diplomatic blow against Assad's legitimacy and demonstrates how far the opposition has progressed.”

He pledged to "use this recognition as a diplomatic platform to represent the Syrian people, to advocate for services and assistance to benefit the millions of Syrians inside and outside the country who are in need, and to push for an end to the killing as soon as possible."

A House aide, who spoke on condition of anonymity, said the announcement is meaningful. "This allows the opposition a much easier time in fund-raising and establishing a bank account," the aide said. "One of the things they are really struggling with is A, legitimacy, which a bank account definitely gets you, and B, fundraising. So this will greatly ease those issues."

Key lawmakers want the State Department to go further. Reps. Ed Royce, R-Calif., and Eliot Engel, D-N.Y., the chairman and top Democrat on the House Foreign Affairs Committee, have co-sponsored legislation to withdraw recognition from Bashar al-Assad as the "rightful" ruler of Syria that cleared the committee by voice vote last week.

"The administration’s decision to recognize the Syrian opposition as an official foreign mission is both welcome and overdue," Royce told Al-Monitor in an emailed statement. "The US also needs to withdraw official recognition of the brutal Assad regime, which continues its campaign of violence and starvation against the Syrian people.

A negotiated end to this conflict won’t be possible unless the administration and the international community increase pressure on Assad. The steps taken today are insufficient to meet that need.”

Engel in an emailed statement to Al-Monitor called the announcement "an important step."

"I think we need to look for other ways to help empower the moderate leaders of the SOC," he said.

The State Department also announced the release of $27 million in nonlethal aid, which has already been appropriated.

The aid package is expected to sail through Congress. The chairmen and ranking members of key committees have the power to hold it, but that seems unlikely.

"Is it as far as we would like them to go? It's not. But this is definitely a step in the right direction," the House aide told Al-Monitor. "And it's doing real good on the ground."

According to an April 15 congressional notification obtained by Al-Monitor, the new aid package includes:

The aide said money to beef up local services is critical.

"If the rebels have taken over and they can't provide basic services to the people who live there, then either extremists are asked to take over or the regime may be able to move back in easily," the aide told Al-Monitor.

The House Foreign Affairs subcommittee on the Middle East and North Africa is expected to hold a hearing on US assistance in Syria with a panel of nongovernmental organizations on May 21, Al-Monitor has learned. The hearing could add to the pressure on the Obama administration to demand that the UN enable cross-border humanitarian assistance instead of going through the Assad regime, as called for in the resolution that passed the House last week.

The aide said Congress was briefed on the aid package last week, after returning from a two-week recess. As part of its outreach to Capitol Hill, the State Department shared links to YouTube videos of Syrian first responders trained and equipped by Americans describing how they've now learned to comb through bombed out buildings without putting victims at risk.

"As a result of US assistance, they're actually saving lives," the aide said.