This week, Israeli police finally raided the Ashdod Port, targeting the members of the trade union, perceived by many as a symbol of corruption and nepotism. 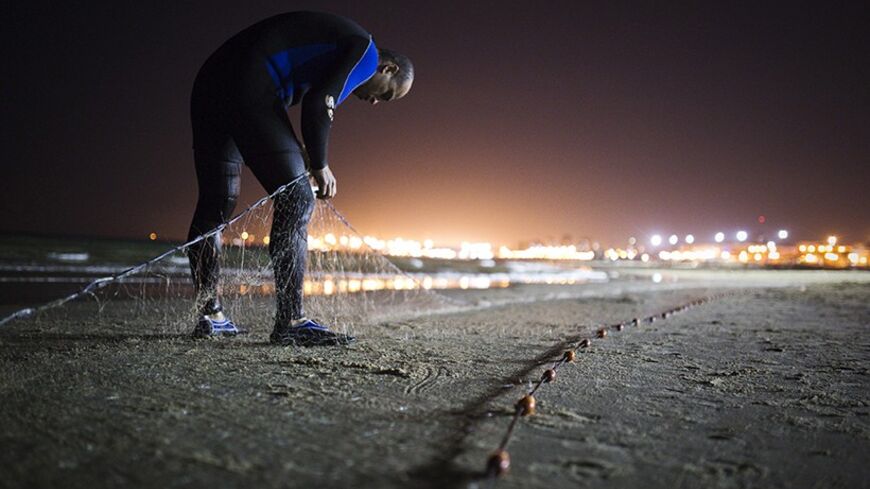 A fisherman collects fish from a net on the shore in Ashdod, April 6, 2014. - REUTERS/Amir Cohen

If the workers at the Port of Ashdod had internalized the government's ferocious war on corruption, what happened to them this week would likely not have taken place. Had they observed the disdain the corruption provoked among the Israeli public, they would have likely warned their unshakeable leader of the impending disaster. And that’s what happened this week to one of Israel’s strongest trade unions, which thought it was impervious to any adverse impact.

On May 28, in the early morning hours, police patrol cars raced toward the port chiefs' homes. One vehicle headed to the elegant home of the port trade union’s chairman. Policemen entered the home, searched all the rooms, took what they wanted with them and ordered him to accompany them. When Alon Hassan exited his house, police investigators encircled him and pushed him into the patrol car.

It is hard to imagine such a scene taking place in Israel in earlier times. So anxious was the state about the honor and status of those leaders that even the police stood helpless before them. Doing whatever the heck they wanted, these leaders would not even “stop at a red light.” In recent years, however, something started changing. Israel declared an all-out war on organized crime and profiteers. They were no longer untouchables.

In the late afternoon hours of May 28, a few hours after the arrest, Ashdod’s cafes filled up with hundreds of people. You could tell by their expressions that they were preoccupied by the affair. They sat around tables and enjoyed the cool breezes blowing in from the sea. The port’s cranes and derricks rose high into the skies, not far from the modern commercial center. Now and again, a long siren would split the air when a ship readied to cast anchor.

On ordinary days, the pride of the residents in "their" port knows no boundaries. Ever since the port was built, it brought them prosperity and growth and put their city on Israel’s industrial map. Almost every resident of the city is connected in one way or another to the port. Almost every one of them has a relative or a close acquaintance who works at the port. “The port is our family, and we feel that what happened today is a real attack on the family,” said Felix Dahan, a resident.

It was quite an unusual week in this city, a place described by author Amos Oz in his book "In the Land of Israel" as “Israel’s most normal city.” Its strongman was arrested like a small-fry criminal, leaving a stunned city behind him. And if that wasn't enough, as he was being questioned, the police arrived at the home of Rabbi Yoshiyahu Pinto — a spiritual icon with tens of thousands of followers — and detained him for questioning as well. Who would have thought such a thing was possible? Until recently, Rabbi Pinto was allowed to enter and exit the country without even going through a security check, as if he were the prime minister. Now he was picked up by the police just like any other felon. Two dramatic arrests of two iconic figures in one day in one city. Arrests that attest to the dramatic changes in Israel in connection with corruption.

Around a cafe table in the city sat veteran immigrants from Morocco, some of the port's earliest workers after it was founded in the 1960s. Almost all at the table were convinced that the state had concocted a plot to harm the port workers and their public image.

For years, they had viewed the trade union as a guarantee for their welfare, a life buoy in times of distress. But Israelis in general became unwillingly familiar with Ashdod Port, perceived as the only work site in Israel that dared go on strike without an advance notice or authorization. The port workers, mostly Moroccan immigrants who settled in Ashdod, were viewed as loudmouths and hooligans willing to defy court injunctions to protect the chairman of their trade union.

Powerful feelings of discrimination and deprivation led the port workers to establish a union that is considered to be the strongest in the country. Everyone feared them, including the government, the Knesset and even the courts. Over the years, they developed an organizational culture that was unique for its nepotism; preference was given to those who had relatives working at the port. Over time, the port employees became one large family. The committee head himself, Hassan, is part of a third generation of port workers. His grandfather worked at the port, his father worked at the port and his son is slated to begin his career at the port.

The news of the arrest of the trade union chairman hit the city like a thunderbolt. The workers were so convinced of their righteousness and so entrenched in their organized strength, that they didn't notice the black clouds hovering above them. They could not imagine that the same state that sent a president to jail and sentenced a former prime minister to six years in prison, would dare face down the head of a trade union. And that is exactly what happened. On May 27 before sunrise, 15 Ashdod Port employees were arrested, including high-ranking figures like the port’s CEO.

Almost every Israeli followed with stupefaction the blatant corruption that had, ostensibly, spread throughout the port. Almost every Israeli was astounded by the fact that the union chairman had turned into a multi-millionaire thanks to the business activity of various companies — all of which were connected or conducted business relations with the port itself. Throughout the years, glaring helplessness was exhibited by the country’s institutions that watched defenselessly from the sidelines as the workers' organization grew into a monster.

The workers were not averse to politics; they embraced it wholeheartedly. With the goal of increasing their power, they organized themselves around the Likud and Labor parties, and ordered the workers to be enrolled as members to influence the parties from the inside. About a year ago, a fierce confrontation erupted between Hassan and then-Labor Party Chair Shelly Yachimovich, who called him “corrupt.” Hassan ordered his workers and their family members to withdraw from the party. Yachimovich is convinced that the Ashdod Port worker votes had a large part in causing her rousing defeat to Isaac Herzog, who inherited her position as Labor Party chairman in November 2013.

At another table in the cafe, Dahan angrily complained that the city's good name had become connected to the arrest of the port strongman. “This is terrible,” he said. “These people slandered our reputation and harmed the image of all of us.” Yossi Cohen, a port pensioner sitting next to Dahan, said, “You give it all the strength you’ve got and build one of Israel’s most beautiful cities, and then along comes the state and ruins everything for you.”

Many in Ashdod are convinced that the state conspires against them because of their origins, their status and power. Two of the city’s most iconic figures were arrested and the residents now find it hard to bounce back from the blow. Yet, the public thinks otherwise.

Numerous polls show that the public considers the struggle against corruption that has swept Israel to be a war in every sense of the word.