The collapse of the Hadassah hospital demonstrates that as long as the government avoids dealing with powerful interest groups that control the economy and threaten politicians, the next fiasco is just a matter of time. 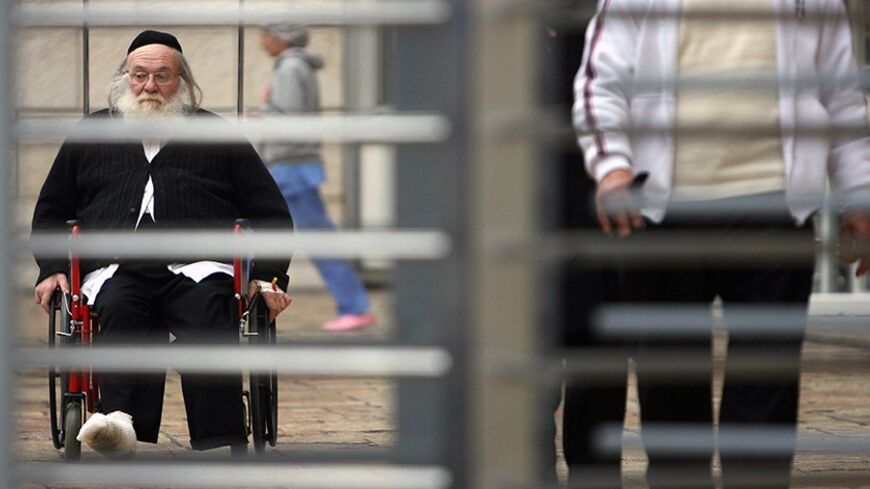 An Orthodox Jewish man pushes himself in a wheelchair outside Hadassah hospital, Jerusalem, Jan. 14, 2006. - REUTERS/Chris Helgren

While the collapse of the Hadassah Medical Center in Jerusalem continues to resonate in newspaper headlines and newscasts alike, there have been reports in the last few days of port workers in Ashdod and Haifa registering en masse for the Likud Party. According to these reports, the goal is to apply pressure on the Likud minister of transportation, Yisrael Katz, to put a halt to a plan to establish private ports in Israel.

Ostensibly, there is no connection between the financial crisis facing the hospital and the forceful struggle of the port workers. The truth is, however, that both cases are symptomatic of the same disease now plaguing the Israeli economy: Public organizations or semi-public organizations — as in the case of Hadassah, the electric company, health insurance providers and the Israel Broadcasting Authority — are run inefficiently by powerful interest groups that are not subject to any real oversight. Enormous systems that rely on public moneys are terrorizing the political system.

The Hadassah Medical Center collapsed because of poor management, with new information about the extent of it revealed every day. The state lacked the desire and the ability to oversee such a private entity, but now that the hospital has run out of cash and is in the process of freezing its debts, the government is being called in to extract it from the mire. The problem was more than just the hefty bonuses received by the general manager, professor Shlomo Mor Yosef, or the huge salaries of some of its doctors. The problem was the organizational culture in its entirety, which was wasteful and inefficient, lacked transparency and went unsupervised.

At the Ashdod and Haifa ports, powerful workers’ unions are controlled by domineering personalities like the chairman of the Ashdod Port Workers’ Committee, Alon Hassan. They have physically blocked any reforms geared toward making the economy more efficient and have terrified politicians. In the most recent incident, Hassan set out to sabotage the political career of former Labor Party chair Shelly Yachimovich, who dared to come out against him and assert that he is detrimental to organized labor.

Hassan and his circle took pride in having gotten hundreds of port workers and their families to register for the Labor Party to prevent Yachimovich from being elected in the party’s leadership primaries. After Yachimovich's defeat in November, they took additional pride in the role they had played in making it happen.

Now the port workers have switched to the Likud, so they can threaten Katz. So far, it is encouraging to see that the minister of transportation is showing no signs of folding despite the threats and despite the political price he might pay. Katz responded on his Facebook page to the mass Likud registration at the ports, writing, “The reform will continue, and the new ports will be built with all due momentum. If asked to choose between the public or Hassan, I prefer the public.”

It is truly disturbing the way the port workers have switched from one party to the other so easily, just to force their will upon politicians. What is even more disturbing is that this tactic appears to affect how the Israeli economy is being run.

With the fiasco at the Hadassah Medical Center already blown up in the country’s face, the ports, the electric company and the budgetary pension crisis are all ticking time bombs right around the corner. They are part of the same structural problem that has been ignored by every recent government: an economy structured around juntas that worry about themselves and cannot see anything beyond their own narrow interests.

While most recent governments lacked the audacity to try to correct this warped, structural flaw, the current government did have and still has such pretensions. In the spirit of the social protests of 2011 that had such an impact on the last elections and their results, and inspired by the cell phone reform of former Communications Minister Moshe Kahlon that turned him into a hero of the masses, almost all the current ministers announced reforms to benefit the public in the areas under their jurisdiction.

They began with the reform of the Israel Broadcasting Authority by Communications Minister Gilad Erdan, extended through the many promises of Finance Minister Yair Lapid and Economy and Trade Minister Naftali Bennett to reform the housing market, and went all the way to Katz’s reform of the country’s ports. However, apart from the privatization of the ports, which Katz is spearheading so courageously, it is impossible to list another significant structural reform that has been advanced. Even Prime Minister Benjamin Netanyahu, who called on ministers in his last term to “be Kahlons,” does not appear to be involved in the process and is certainly not personally leading any reforms.

The committee established by Health Minister Yael German to bolster public medicine is hard at work, but it is not at all clear whether its conclusions, once submitted, will be followed by operative actions. German, who had been a successful mayor in the coastal town of Herzliya, is considered to be a serious minister who tackles issues in depth, but it is questionable whether she will have the time to put together a reform and then to also implement it.

In the end, despite all of its big promises for structural reform, the current government — the social protest government — is exhibiting the same laxness as its predecessors. It is showing the same lack of audacity to deal with fundamental problems. As long as things continue in this way, the “next Hadassah” will be here in just a matter of time.