Developments in Syria have confounded the Turkish government’s efforts to depose President Bashar al-Assad and forced a rethink of its policies. 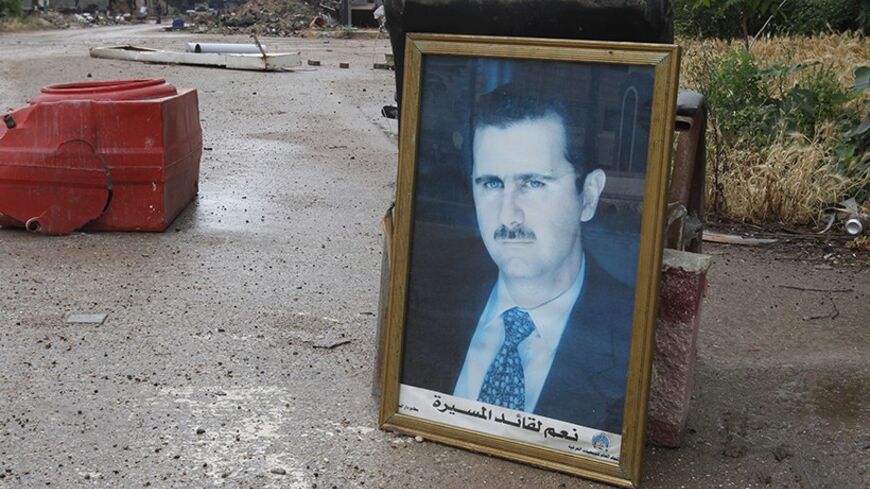 A photo of Syria's President Bashar al-Assad is seen along a street in Homs, May 8, 2014. - REUTERS/Khaled al-Hariri

As the Syrian crisis moves into its third year, it is premature to say that President Bashar al-Assad is winning his war, as he claims. It is, nevertheless, clear he is not losing it. He also has enough confidence to stage sham elections while the bloody civil war still rages, with all its supposedly democratic trappings, including candidates who will run against him.

Assad’s intention to run in these elections also indicates he has no plans to disappear from the scene anytime soon, especially since he continues to be backed strongly by Russia and Iran. All of this is bad news for Turkey, where the government of Prime Minister Recep Tayyip Erdogan has banked on a total defeat for the Assad regime and has also been pushing futilely for a Western-led military intervention in Syria.

Meanwhile, despondency and defeatism appear to be setting in among opposition fighters, including members of the jihadist group Jabhat al-Nusra, alleged to be receiving military support from Turkey.

Ankara has, however, given no sign yet that it is about to change tack on Syria, although it is generally agreed among diplomats and analysts that its options have run out. Even the Geneva process, which Turkey supported somewhat begrudgingly at the start, appears to be falling by the wayside because of tensions between the United States and Russia over Crimea.

The Erdogan government was initially cool toward Geneva because it appeared to legitimize Assad by accepting representatives from his regime as official envoys, but reluctantly moved to support it as the only option left following the West’s refusal to intervene militarily in Syria or to provide the Syrian opposition with heavy weaponry.

Meanwhile, the political situation in Turkey, which remains tense as it becomes clear that Erdogan will run in the August presidential elections, is also drawing the Justice and Development Party (AKP) government’s attention and energy away from the Syrian crisis.

This crisis on its borders nevertheless continues to fester for Turkey in ways that cannot be disregarded, particularly the growing refugee problem that is increasingly causing domestic unrest as well as threats from the jihadist Islamic State of Iraq and al-Sham (ISIS).

Turkish security forces are on increased alert against ISIS, especially after Saudi Arabia announced unearthing a cell linked to the group, considering the discovery a sign that ISIS is trying to establish itself in regional countries.

US State Department spokeswoman Marie Harf told a group of foreign reporters at the Foreign Press Center in New York on May 8 that ISIS posed a great threat to Turkey as well, adding that the State Department is working closely with Ankara on the matter.

As for Turkey’s growing refugee problem, this was brought home vividly again only a few days ago when Syrian refugees in Ankara’s poor and unruly Altindag district clashed with local residents, following claims that a 15-year-old local boy had been beaten up by Syrians who allegedly also burned a Turkish flag. The press reported that 20 Syrians had been arrested in the incident, which left seven police officers injured.

As developments such as these continue to create a headache for Ankara, the situation in Syria appears to be going Assad’s way. US Sen. John McCain, a staunch supporter of the opposition, has conceded that Assad is making headway, especially after the negotiated evacuation by rebel forces from the city of Homs a few days ago.

McCain called this development a “huge victory for Assad” in a brief interview with Al-Monitor’s congressional correspondent, Julien Pecquet, just prior to meeting with Syrian Opposition Coalition President Ahmad Jarba in Washington. "It creates momentum for Bashar [al-]Assad for already ramped-up attacks, which are continuing leading up to his 'election.'"

Turkey has also rejected the presidential elections announced in Syria, saying, “It is not possible to take such a so-called election seriously in any way whatsoever.” He declared their results “null and void” in advance.

“The announcement made by the Syrian regime, which has long lost its legitimacy and its legal capacity to administrate the country, that it will organize so-called presidential elections on June 3, 2014, is, to say the least, an act of disrespect and insolence against the memory of hundreds of thousands of slaughtered and millions of exiled Syrians as well as towards the international community,” said the Turkish Foreign Ministry in an April 24 statement.

Although the Syrian presidential elections will undoubtedly be a farce, the large crowds of chanting supporters that Assad is still capable of assembling for the cameras in Damascus and in other government-held territories — including those in central Syria, where the regime appears to be regaining its grip — will nevertheless enable him to claim public support against his enemies, including Turkey.

The question for Ankara, therefore, remains the same at a time when no early solution appears on the horizon to the Syrian crisis, with all that implies for Turkey in terms of spillover effects. So what can it do to extricate itself from what the Brussels-based International Crisis Group (ICG) has dubbed “Turkey’s Syrian Quagmire?”

“The conflict was not of its making, but Ankara has in effect become a party. Unable to make a real difference by itself, it should focus on protecting its border and citizens, invigorate recent efforts to move back from the ruling party’s Sunni Muslim-oriented foreign policy to one of sectarian neutrality and publicly promote a compromise political solution in Syria,” the ICG recommends in its latest report on the subject.

This would have to entail the Erdogan government sending out diplomatic feelers to the Assad regime while indicating that Ankara is changing its position of open sympathy and support for the overbearingly Sunni opposition.

Ankara would also have to reach out to Syria’s non-Sunni minorities that it has estranged in this crisis and promote a pluralistic democratic line instead of the majoritarian one Erdogan is pursuing in Turkey, and one that also factors in the rights of Syria’s Alawites and Christians.

The warning issued by Ryan Crocker, a former US ambassador to Lebanon, Syria and Iraq, to the Obama administration is also valid for the Erdogan government in this regard.

“We would be making a grave mistake if our policy were aimed at flipping the tables and bringing a Sunni ascendancy in Damascus,” Crocker said during a presentation at the Council of Foreign Relations in Washington.

Pointing out that there is no assurance that a Sunni government would be an improvement on that of Assad, Crocker also indicated that such a government would probably be “dominated by the worst of the worst” religious extremists.

Given this very real prospect, the repeated accusations from the West that the Erdogan government is supporting jihadist groups like Jabhat al-Nusra could also pose an embarrassment for Ankara at a time when the UN is said to be preparing to refer Syria to the International Criminal Court over crimes against humanity committed not just by the regime, but also by radical groups within the opposition.

Not just denying its alleged links with these radical groups, as it has been doing, but openly and verifiably distancing itself from them would therefore have to also be part of any new direction that Ankara takes.

But can Turkey do, especially given the degree to which Erdogan and his party have committed themselves, both verbally and materially, to the demise of the Assad regime and made their Sunni-based sympathies for the Syrian opposition so blatant?

The question that Erdogan and the AKP have to answer in turn, however, is just as crucial: What option do they have other than changing tack in the direction proposed by the ICGs, given that Assad remains unbeaten even if he is not victorious yet?

This question will loom even larger if or when Erdogan becomes president in August and finds the time to lift his head from domestic politics to face the reality of the situation facing him in Syria, where developments have confounded all his plans and expectations thus far.