Turkey’s Association of Atheists faces negative public perceptions, but is a sign of a trend in Turkish civil society of groups seeking recognition and rights. 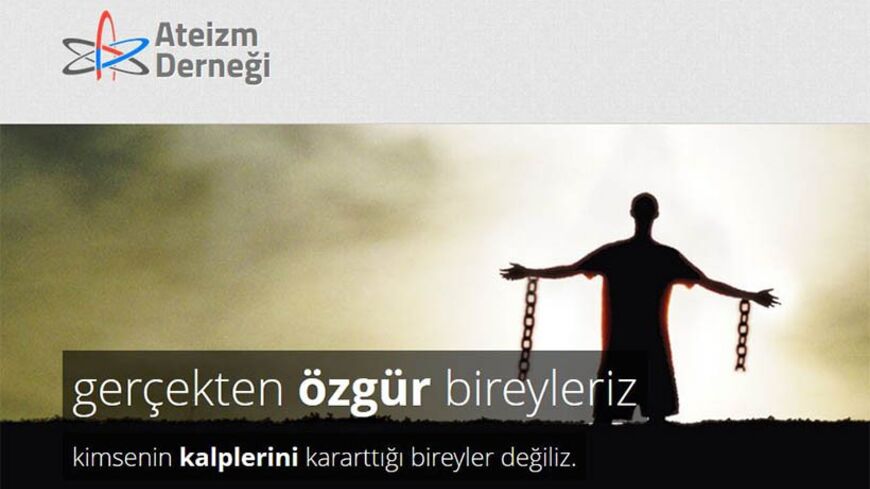 A group of 11 people in Turkey recently established the country's first "Association of Atheists." - www.ateizmdernegi.org

One of the most potent accusations you can hurl in an age of rising Islamism in Turkey is that of “atheism” if you intend to undermine the reputation of a person or a group. Prime Minister Recep Tayyip Erdogan and members of his Justice and Development Party (AKP) have not refrained from hurling them.

It takes courage, therefore, to establish the country’s first atheists association. The press reported this week that this is exactly what a group of Turkish atheists have done. It also took courage to set up a call center within the association that will provide advice and information, not only to harassed or confused atheists, but anyone interested in the topic.

Erdogan, a devout Muslim — and a fundamentalist, according to his detractors — blasted at demonstrating students not so long ago, accusing them of being terrorists and atheists in the same breath. Their supposed act of “atheistic terrorism” was trying to stop a public road running through the center of their campus.

“We opened a boulevard in Ankara. In spite of whom? In spite of those leftists. They are atheists, they are terrorists,” Erdogan said in early March when referring to the students of the prestigious Middle Eastern Technical University.

Within days of Erdogan’s remark, a prominent AKP figure was out using atheism to blast at his own enemies. This time, it was a defensive Zafer Caglayan, the former economy minister who faces serious corruption charges.

“This nation sees very well the kind of a mentality we are struggling with. If it was a Jew, an atheist or a Zoroastrian doing all this I would understand it. But shame on them if those doing this are passing themselves off as Muslims,” Caglayan told a crowd of supporters in Tarsus, criticizing opponents of the AKP.

Caglayan was immediately castigated, of course, and had to “clarify” his remarks later, claiming, as is usual in these cases, that he was misquoted. But he went on the defensive for his remark about the Jews — not the atheists.

It was an embarrassing and revealing slip of the tongue that had to be corrected, coming as it did at a time when the AKP is accused of having anti-Semitic leanings. As for Zoroastrians, there was no need for any “clarification” on their account, either.

Caglayan’s offending remark appeared to also be in keeping with the findings of a 2008 survey by the International Social Survey Program that was conducted in cooperation with Sabanci University in Istanbul.

That survey revealed not only a high degree of religiosity in Turkey but also a serious degree of intolerance toward other faiths, even though most Turks would claim the opposite.

Writer Mustafa Akyol recently argued on behalf of tolerance toward people of other convictions, a trend he sees budding in Turkey. He also cited remarks by Mehmet Gormez, the head of the Directorate of Religious Affairs, who called for understanding not just toward people of other faiths but also toward atheists. The ease with which Erdogan and Caglayan used atheism as an insult to play to their political gallery, however, shows that there is still a ways to go in this respect.

The founders of the Association of Atheists, nevertheless, say they did not meet any official difficulties when applying to the authorities to get the necessary permit.

Anecdotally speaking, I confronted no difficulty either when applying to have the religion bracket in my official ID, which all Turkish citizens have to carry, left blank on the grounds that it is no one's business what my religious beliefs are.

One can say, therefore, that the bureaucracy in Turkey is generally inclined to act in a politically correct manner with regard to issues like this, given that constitutionally speaking, this is still a secular country.

But political correctness in the bureaucracy is one thing, while public perceptions and attitudes developing under an overtly Islamic AKP is another. Erdogan is even on record as saying he wants to see a religious youth emerge in Turkey, and this goal may be coming true, as another personal anecdote shows.

The owner of one of the TEKEL outlets — officially sanctioned liquor stores — in my neighborhood told me a few days ago that his teenage daughter had come home from school recently asking him if he was doing something bad for a job. When he asked her why she should ask such an odd thing, she said that some of her classmates had started taunting her because he was selling alcohol.

Tolga Inci, the acting head of the Association of Atheists and one of its 11 founding members, told the mass circulation Hurriyet daily on Apr. 21 that the group's primary objective is to speak up for the rights of atheists and provide legal support to those who are hounded for their nonbelief.

“Many people called us after we were established, saying they had been insulted or left to suffer court cases. At the moment, we have three volunteer lawyers. We will give legal support to our friends who are facing financial difficulties and have lost their jobs, or were evicted from their dormitories for simply saying ‘There is no Allah’ or ‘I don’t believe,'” Inci said.

Pointing out that there are serious public misperceptions about atheism, Inci added that the group would also establish commissions and hold seminars to inform people about what atheism is and what it is not.

“There was a public survey published in 2013 in which 51% of those questioned said atheists believe in God. We came together as a group of atheists to say: ‘What is going on? Enough already!’ and decided we have to explain ourselves,” Inci added.

Indicating that their door is open to everyone, whether they are believers or not, Inci said they want the public to understand what kind of people atheists are. He stressed, however, that they were not engaging in a different kind of missionary activity.

Inci said the only rule they have is that people keep their political views to themselves. He also said that they take it personally when Erdogan equates atheists with terrorism, saying, “We are not terrorists; we are simply atheists.”

Turks use the saying “peddling snails in a Muslim neighborhood” to describe extremely difficult, if not impossible, undertakings. Time will tell if the newly founded Association of Atheists is peddling snails in Turkey, where religious worldviews are gaining ground.

There is also the very real possibility that this association could become the target of physical attacks from maverick groups of fundamentalist youths accusing it of disseminating anti-Muslim propaganda. Such attacks can not be discounted in the religiously charged atmosphere of present-day Turkey.

Notwithstanding such unsavory prospects, however, the establishment of such an association shows that Turkey is a country where different groups are increasingly organizing to make their side of the story known and demand that their legal rights are respected.