Turkish politicians and media outlets have been discussing why so many young people are opting for “deism” at a time when Islam seems more ascendant than ever. 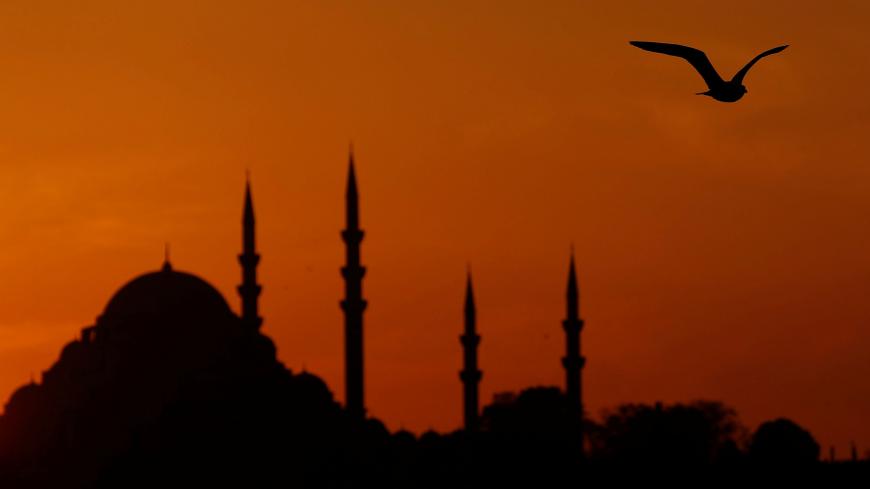 A seagull flies over the Bosporus as the sun sets over the Suleymaniye Mosque in Istanbul, Turkey, Nov. 14, 2017. - REUTERS/Murad Sezer

On April 10, at the Turkish parliament in Ankara, President Recep Tayyip Erdogan did something unusual during his usual weekly address to the deputies of his ruling Justice and Development Party (AKP). He suddenly paused during his address and called the national education minister, Ismet Yilmaz, to the podium. The two men then murmured for about half a minute in front of the huge audience. Muted microphones did not catch the whole conversation, but the minister was heard speaking about "the report on deism" and “the thoughts of our youth about this.” “No,” Erdogan was heard saying in a definitive tone. “That is wrong.”

The report in question, which was discussed at a workshop by the Ministry of Education branch in Konya, a conservative Anatolian town, had made the news in early April. Titled “The Youth is Sliding to Deism,” the document shared surprising observations about the very young people that Turkish society often expects to be the most religious: the students of the state-sponsored religious “imam hatip” schools. The report says that because archaic interpretations of Islam cannot persuade the new generation on issues such as the “problem of evil” (why God allows evil to take place), some imam hatip students have begun questioning the faith. Instead of adopting atheism, the report added, these post-Islamic youths embrace the milder alternative: “deism,” or the belief in God but without religion.

The report surprised and also angered Turkey’s conservative establishment. Devlet Bahceli, the leader of the Nationalist Action Party, which is supposed to be an opposition party but has lately become a staunch Erdogan ally, lashed out against those who prepared the report, for “putting on the Turkish youth the stain of deism, which is one stop before atheism.” A few days later, Turkey’s top cleric, the head of the Directorate of Religious Affairs, also spoke on the deism controversy. Explaining that the term implies “a philosophy that denies prophethood,” the theologian hopefully added that once they really understand what deism is, “no member of [the] nation will accept such a deviant thought.”

In fact, the deism controversy has been on Turkey’s agenda even before these recent outbursts by prominent figures. One of the first intellectuals to draw attention to this issue was Mustafa Ozturk, a progressive Islamic theologian who writes a column in the daily Karar. In an April 2017 piece titled “The Footsteps of Deism,” Ozturk argued that despite the conviction among religious conservatives that they are in the midst of a golden age, something very fundamental is slipping out of their hands, as “the new generations are getting indifferent, even distant, to the Islamic worldview.” Most of the people who claim to represent Islam in Turkey offer a very archaic, dogmatic notion of religion, Ozturk explained, and this leads to secularization among the more cosmopolitan, questioning youths.

Since then, the erosion of Islam among young people has been an oft-repeated theme in the Turkish public sphere. At a conference in March, a conservative academic at Istanbul’s Medeniyet University said he has students who wear the Islamic headscarf because of their family environment, but “who confess in private that they are not even deists but atheists.” In the past several months, dozens of articles in the press discussed the “deism plague,” and even TV shows highlighted the issue. Yet there is no data on how many Turks have abandoned Islam to jump on the “deism” bandwagon, though plenty of anecdotal evidence suggests that this is no imaginary matter.

The most interesting question is why so many Turks are losing their faith, especially at a time when Islam seems more ascendant than ever. Answers vary, especially according to political stance.

For the staunch supporters of the government, deism seems to be just one of the many conspiracies that Western powers have cooked up against the glorious Turkish nation. Yusuf Kaplan, a columnist for the pro-government daily Yeni Safak, said deism was spreading among the children of conservative families, while the children of more secular families were going for the more radical edge: atheism. The underlying reason, according to Kaplan, was the hedonistic, materialistic and degenerate culture coming from the West. Turkey had to stand up to this cultural erosion by further Islamizing its education and media, or else “the imperialists could occupy the country, mentally, from within.”

For other Turkish commentators, however, the real reason for the loss of faith in Islam is not the West but Turkey itself: It is a reaction to all the corruption, arrogance, narrow-mindedness, bigotry, cruelty and crudeness displayed in the name of Islam.

This view is often supported by opposition voices, but even some reasonable pro-government voices in the media have given it a thought. One such voice is Kemal Ozturk, another columnist for Yeni Safak, who wrote that the rise of deism in Turkey is an unmistakable fact “observed by anyone who follows society.” He added that the religious conservatives who explain this away as slander against their beloved government or as a “foreign conspiracy” against Turkey were making a mistake. The real problem was within the very sphere of Islam, within the deep contradictions between the conservatives’ alleged ideals and actual practices, as well as within the “dogmatic clerics” and the “ignorance, animosity and immorality” among Islamic communities.

Another commentator, Akif Beki, comes from a pro-government background but has lately turned critical. Beki pointed to a more specific problem: the unabashed exploitation of Islam for political ends. A recent example, according to Beki, was a propaganda speech by Ali Murat Alatepe, a member of the ruling AKP and the mayor of Esenyurt, an Istanbul municipality. “If we lose here,” Alatepe told a large audience, referring to his municipality, “then we will lose Jerusalem, we will lose Mecca.” So, accordingly, the dominance of the AKP is indispensable to Islam. Or, in other words, Islam is indispensable to the AKP’s dominance.

I agree with Akif Beki and other like-minded Turkish commentators on why so many young Turks are losing faith in Islam. It is precisely because Islamists are empowered, and, by their own behavior, they are pushing people away from the faith they claim to uphold.

I had predicted this, in fact, in an Al-Monitor article back in March 2015 titled “Turkey is becoming more secular, not less.” “The AKP experience, including its dreams of re-Islamizing Turkey,” I then wrote, “is likely to be counterproductive and will serve to further accelerate secularization.” Today, after three years of further deterioration, the counterproductive effect seems to be in full swing. It even has a famed banner now called “deism."