After its victory in Yabrud, the Syrian regime may try to retake Aleppo, strengthening its position ahead of presidential elections scheduled for early June. 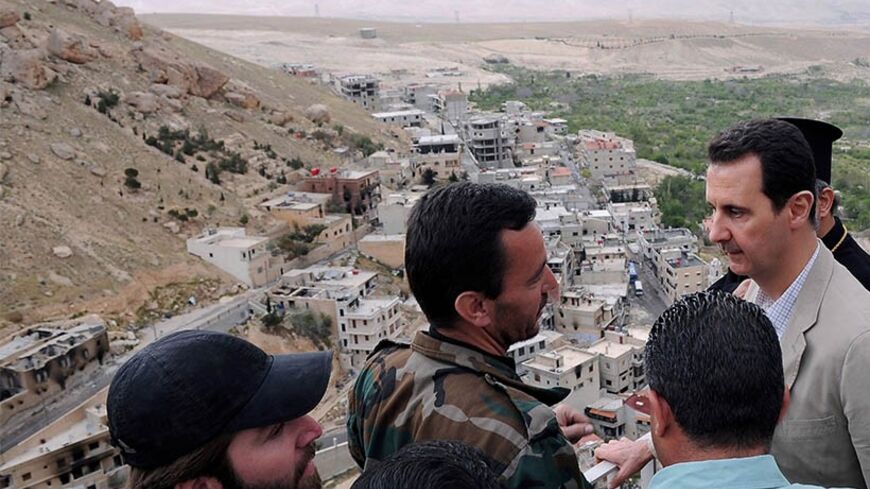 Three simultaneous developments were still needed to clarify the Syrian regime’s orientation on what President Bashar al-Assad described as a big turning point in the course of events.

What is the link between the three developments and Assad’s claim that the events in Syria have turned? Clearly, the answer lies in that the fall of Qalamoun has protected the back of the regime’s forces in the west. The Jordanian bombing of opposition gunmen indicates that Damascus can rest assured about its southern underbelly. And the coincident shelling of the capital shows that the gunmen are in a state of siege in their last position in East Ghouta. All this can be considered a countdown that regime forces are heading to those towns, after the regime has gained control over the western border with Lebanon and is reassured about its southern border with Jordan.

In this context, it has become known that military units loyal to the regime launched an assault on East Ghouta days ago, which led to their gaining control of the town of Maliha east of Damascus. Maliha is a relatively small village, but it has strategic importance as it is located in the center of ​​East Gouta. Thus, regime units have in effect split the gunmen positions into two sections: the first is north of the capital, where two battles were expected soon against the main gunmen strongholds in Harasta and Duma, and the second is south of Damascus, starting from Jaramana down to Daraa near the Jordanian border.

Al-Monitor has received information from Syria that there will soon be developments on these fronts whereby regime forces would move to control opposition positions at these locations. According to the information, the biggest confrontation with East Ghouta will happen in Duma. However, the power balance emanating from the recent fighting, particularly since the fall of Qusair in June 2013, Yabrud in March 2014 and then the rest of Qalamoun could constitute a continuous wave of collapses in the ranks of the armed opposition in East Ghouta.

The regime may try to clean up this area in the next few weeks and then devote itself to the battle of Aleppo. Some information from Damascus indicates that the regime is planning to achieve fast and decisive progress in Aleppo, whereby regime forces gain control over two key strategic positions on the outskirts of the city. The first position is an Air Force Intelligence site, with an area of nearly 2 million square meters (494 acres). From there, the regime would be able to control Zahra, a large apartment complex of more than 500 residential units in an area overlooking Aleppo from the west. The second position is the Aleppo central prison in the north of the city, which is a sprawling area on the outskirts. The prison is still controlled by regime forces, but has been besieged by opposition forces for nearly two years.

It should be noted that two strategic sites — the Air Force Intelligence site and the Aleppo central prison — have seen continuous back-and-forth attacks between the two parties. This indicates that the two parties are at a stalemate in this part of northern Syria.

The regime believes that the momentum it has gathered from the west and center can help it sweep through those two areas. According to the information from Damascus, the timetable of the regime’s forces in the coming weeks is first East Ghouta and then the strategic locations in Aleppo, making Aleppo the second (rebel-held) large Syrian city that would fall into the grip of the regime’s military. More importantly, the information does not rule out that this timetable begins before the Syrian presidential elections. In Damascus, it was announced that presidential nominations can be submitted starting April 21, and that the elections will take place in early June.

By then, the regime might have gained control over a continuous geographical area stretching from Syria’s border with Jordan and Lebanon, all the way to Aleppo and passing through Damascus, its outskirts, and East and West Ghouta. That would be necessary for the regime to conduct the presidential elections it wanted.

In the past two weeks, the Syrian authorities have taken a series of preliminary measures in this regard, including preparations by Syrian diplomatic missions abroad to receive voters living outside the country. It is as if the regime was consecutively trying to win the battles over Damascus and Aleppo to openly declare its success in the battlefield, and then welcome the presidential elections — according to a diplomatic source — with a fully operating system for Syrians, locally and abroad.