Russia-US crisis may soon spread to Near East

Despite a likely win for US-Russia cooperation on eliminating Syria's chemical weapons, the provision of anti-tank weapons by the United States and its allies to moderate Syrian opposition forces will only destabilize Syria further, in Moscow's view. 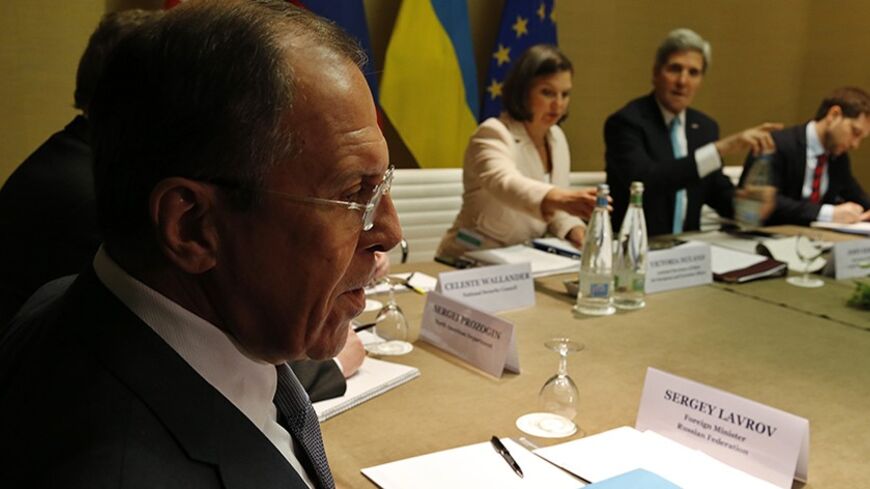 Russian Foreign Minister Sergey Lavrov looks on as US Secretary of State John Kerry starts a meeting in Geneva, among representatives of the United States, Ukraine, Russia and the European Union about the situation in Ukraine, April 17, 2014. - REUTERS/Jim Bourg

It seems that the tendency toward a needless exacerbation of US-Russian relations, which started with the crisis in Ukraine, has now begun to spread to the Near East as well. This time the area of confrontation has become Syria. The Russian-US “honeymoon,” more precisely the time allotted for eliminating the Syrian chemical arsenal, will soon be over and all signs indicate that the plan will be fulfilled as agreed. But proposed Geneva III talks have clearly lost traction. Fierce fighting among the members of the Syrian opposition has severely hurt their potential and the chances of even a minimal agreement between those who are generally considered to be the moderate opposition (although the assessments of Moscow and Washington differ here in some respects). According to Yezid Sayigh, “The National Coalition’s reprieve during the Geneva talks also momentarily masked the extent of its incapacitation by renewed Saudi-Qatari competition for influence over the Syrian opposition.” Meanwhile, the designation by Riyadh of the Muslim Brotherhood as a terrorist organization dealt a serious blow to this organization’s standing in Syria, where it plays a major role in both the National Coalition and the Syrian National Council, that is to say, the very organizations that most of the world community regards as moderate.

Leaders of the diverse organizations forming the Syrian opposition have long asked the West for supply of modern antitank and anti-aircraft weapons to turn the tide in the war against President Bashar al-Assad. In the course of a series of recent meetings in Moscow with officials (such as Deputy Foreign Minister Mikhail Bogdanov), experts and journalists, a group of Syrian oppositionists presented their “charter for democratic reform,” which in one way or another came down to discussing the need to arm the rebel groups with modern weapons to resolve the crisis. Moscow, as is known, is against this method of resolving the crisis. For the time being, Western governments, above all the United States, have withstood intensive lobbying by Saudi Arabia and Qatar to arm the rebels with such dangerous weapons systems, primarily out of fear that the arms may end up in the wrong hands. The experience of Afghanistan — where the mujahedeen turned the weapons they received against the very people who had given them — had not been forgotten.

Recently, however, Washington has changed its position. On April 18, The Wall Street Journal (in an article by Ellen Knickmeyer, Maria Abi-Habib and Adam Entous) confirmed previous reports by Agence France-Presse that “the US and Saudi Arabia have supplied Syrian rebel groups with a small number of advanced American antitank missiles.” The Russian media (for example, ITAR-Tass on April 20) states that more than 20 BGM-21 TOW (wire-guided) portable antitank systems had been sent in early March through Turkey and Jordan to Syria to the opposition group Harakat Hazm (part of the Free Syrian Army), and that these fighters have already undergone training in the use of such weapons. RIA Novosti, citing the fact that these deliveries are described as a “pilot project,” posits that in the future the supply of the state-of-the-art modern weapons to the rebels will be expanded. Most likely, the next step in the weapons deliveries will be surface-to-air missiles.

This information came as no surprise to Moscow, which as Russian sources say, was already aware of deliveries of antitank weaponry. According to them, an expansion of deliveries was discussed during President Barack Obama's visit to Riyadh on March 28. At the same time, a senior administration official at the press briefing on the president’s bilateral meeting with King Abdullah bin Abdulaziz said that “our approach on that issue hasn’t changed” and confirmed “concerns about certain types of weapons systems that could be part of a proliferation that would not serve our interest.”

Moscow analysts believe that the following circumstances played a role in changing the course of the US administration.

First of these is the worsening in Russian-US relations due to the reunification of Russia and Crimea, alongside the strengthened role of neoconservative elements in the Washington bureaucracy, who are anxious to spite Russia wherever they can, and to hinder normalization of US-Iranian relations. These are the very same people who worked behind the scenes during the coup in Kiev. As Robert Merry recently wrote, referring to William Pfaff, Victoria Nuland “even identified the man who should replace Yanukovych after his ouster,” and “the United States spent some $5 billion in fostering 'democratic institutions' in Ukraine designed to nudge the country away from Russian sway.” He said that only “saner heads would have understood how dangerous this kind of activity can be.”

Second is America’s desire to support its Saudi partners, whose Syrian policy has evoked a serious internal crisis in the Saudi Arabian monarchy, the leaders of which blame the United States for all of their problems.

Third is the fear that the antigovernment forces in Syria could fall, which would turn the mantra of “Assad must go” into merely wishful thinking.

Most Russian experts believe that the supply of modern arms to the Syrian rebels:

Unsurprisingly, the Ministry of Foreign Affairs of the Russian Federation has stated that the supply of modern effective antitank weaponry to the fragmented antigovernment forces will seriously destabilize the situation in the Syrian Arab Republic and will not promote a political-diplomatic resolution of the conflict. Does this mean that the United States and Russia have entered a new round of political confrontation, only this time not in Ukraine, but in the Near East?