Britain’s announced inquiry into the Muslim Brotherhood’s activities might be an attempt to appease its Gulf allies without offering any tangible changes. 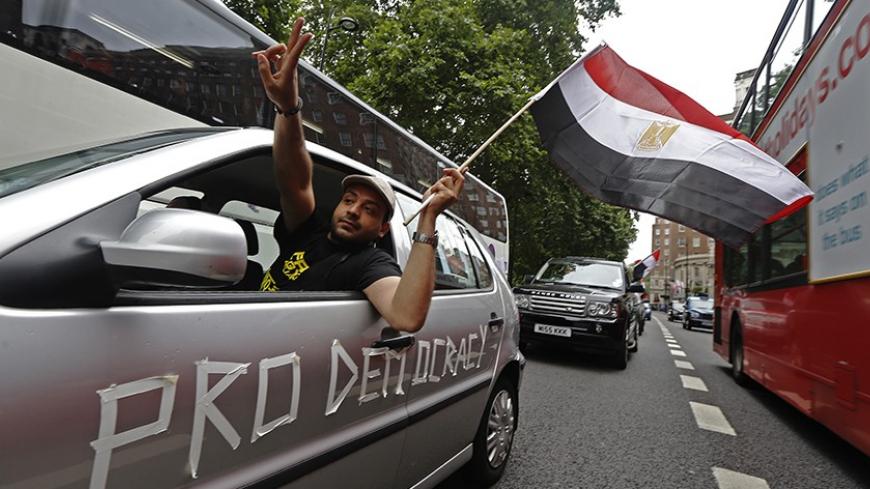 It was not so long ago that London was inaccurately described as "Londonistan," owing to the number of political exiles from the Muslim world, including Arab Islamists, present in the British capital. Many of them returned to their home countries in the aftermath of the Arab uprisings in 2011, but the trend is cycling back. Egyptian Islamists in particular have fled to the United Kingdom after the overthrow of Islamist President Mohammed Morsi in July — but the world has changed. British Prime Minister David Cameron ordered an investigation of the Muslim Brotherhood March 31, following accusations the group was terroristic in nature.

What are the national, regional and international implications of such a move? Has the UK really changed that much?

Islamists have been coming to the UK for many years, dating back to the beginning of modern political Islamism. Arab Islamists sympathetic to or members of the Muslim Brotherhood started arriving as students from different countries in the 1970s and 1980s, and those that decided to stay began civil society organizations. Many of these nonviolent groups developed into essentially post-Islamist organizations, focused more on indigenous British concerns, as opposed to following issues in the Arab world.

It was not only Brotherhood-style Islamists who came. Far more radical Islamists did as well, later on. The likes of radical clerics Abu Qatada, Abu Hamza al-Masri, Omar Bakri Muhammad and others made their homes in London, much to the consternation of other European governments. The French in particular were furious that such radicals could live freely in London, while their British counterparts essentially argued that as long as such extremists did not break British law on British soil, they were free to remain. These more radical Islamists interpreted this as a "covenant of security" — the UK would be considered off limits from attacks from their ilk.

That changed after 9/11. After the war in Afghanistan, and then later on in Iraq, some of these more radical Islamists branded the UK a legitimate target. Four years after 9/11, the July 7 bombings took place in London. The perpetrators were identified as British citizens and it suddenly became clear radical Islamism was no longer a threat "out there." Rather, it was here at home.

The question was: Who was to blame? I served as deputy convenor for the UK government’s task force on preventing radical extremism, and the working group’s findings were quite clear. There was a radical, neo-religious imperative at work, and simultaneously, foreign policy was considered to be a motivating factor. At no point, however, was the insinuation made that Brotherhood-style Islamism was responsible for that neo-religious imperative. That type of Islamism was different.

Indeed, there were a number of organizations that originated with sympathy to the Brotherhood, many of which eventually became "post-Islamist," who were not only not stigmatized by the British government, but worked with it. In one rather famous example, the Metropolitan Police worked with a group called the Muslim Association of Britain, a group deeply sympathetic to the Brotherhood, in essentially evicting the far more radical Abu Hamza al-Masri from a community establishment in North London.

Nevertheless, after the July 7 bombings, every type of Islamism, whether violent or nonviolent, focusing on Britain or on Bangladesh, received a higher degree of scrutiny. That attention might have simply been extra attention in the press, or it might have developed from within the government, but it certainly increased.

This scrutiny did not mean the end of Islamist activity in the UK, however, whether from Britons or from expatriates. London is still regarded as a safe haven for political exiles, and no less so after the ouster of Morsi in Egypt. While the operational headquarters of the Egyptian Brotherhood in exile remains Doha — and to a lesser extent, Istanbul — a substantial lobbying effort and media apparatus for the Brotherhood was set up in London.

This is the national backdrop of Cameron’s decision, but there are obviously international pressures, not least of which come from Saudi Arabia and other UK allies in the region. The Muslim Brotherhood has been declared a terrorist organization by Saudi Arabia, primarily due to what the Saudis see as the Brotherhood’s destabilizing influence in Egypt. The Saudis have identified a "stable" Egypt as critical to Saudi interests, and while they were willing to engage with Morsi early on, those days are gone. Egypt is acknowledged as needing stability above all else, and the Brotherhood is a threat to that geostrategic frame. Cynics will point to the government’s choice of the British ambassador to Saudi Arabia to lead this inquiry as essentially indulging Saudi concerns in this regard, when a civil servant in a far less sensitive position could easily have done the review.

How will that all play out into Downing Street’s review of the Brotherhood? It is deeply unlikely for at least the Egyptian Muslim Brotherhood to be characterized by the British government as a terrorist organization. The group can be accused of sectarianism, discourse that borders on — or even counts as — incitement and even certain types of vigilante force, particularly during Morsi’s era, but any terrorism designation would require direct evidence of actual terrorist activity. The designation would have to stand up in a British court, as the Brotherhood would undoubtedly legally challenge any such designation. Unless there is a plethora of evidence that no one has yet seen, the Brothers would almost certainly win.

What, then, is the point of the review? It could turn out to be a somewhat wily, but essentially empty political move. In announcing the review, Downing Street is mollifying the Saudis and others in the Arab world who are deeply opposed to the Brotherhood, but without actually giving them very much. More right-wing members of the British political establishment will also be pleased to see the group further stigmatized. The review’s results are due in July, and it is entirely possible that they will be issued just before the end of this parliamentary session and the summer holidays in the Arab world. In other words, the inquiry could simply die a quiet death.