Kerry has no excuse for failure in peace talks

The US secretary of state should now offer an accelerated timetable for the acceptance of Palestine as a member of the United Nations. 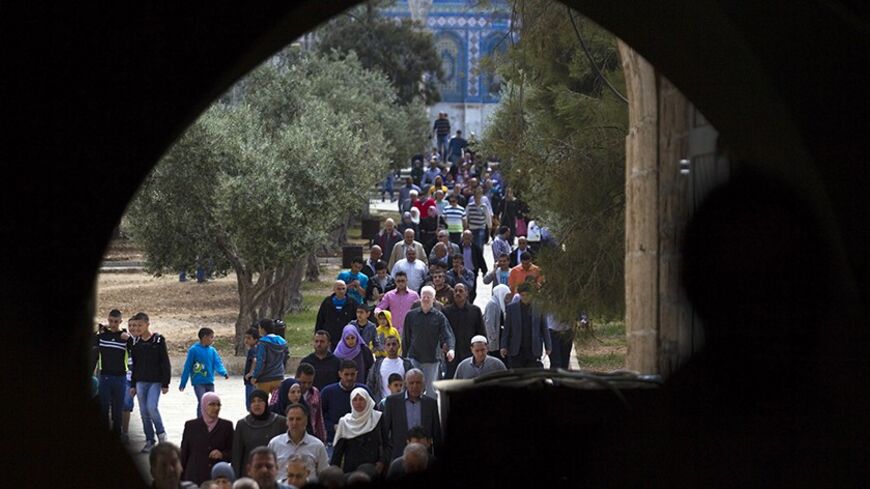 Palestinians leave the compound known to Muslims as Noble Sanctuary and to Jews as Temple Mount, after Friday prayers in Jerusalem's Old City, April 4, 2014. US Secretary of State John Kerry said Washington was evaluating whether to continue its role in Middle East peace talks. - REUTERS/Amir Cohen

When he repeated the worn-out words “We can’t want peace more than they do” on April 5, US Secretary of State John Kerry failed to fulfill his obligation to the millions of Israelis and Palestinians who had hoped his determination would bring about an end to the conflict between the two people.

He has no right to make do with “I came, I saw, I lost, I got out.” Kerry should have known that every diplomatic initiative that ends in failure has a cost. Failure leads to a wave of violence, or at best the disappointment erodes what little is left of the sides' trust in peace. A futile round of negotiations does not bring the Israelis and Palestinians back to where they had been. It adds another layer of cynicism and pushes the peace camp down another notch. Once again we hear the “There’s no partner” chorus, and once again the Israeli media recites the mantra, “The Palestinians never fail to miss an opportunity.”

Kerry’s excuse for failure was that one can bring horses to water, but one cannot force them to drink. With regard to one of the horses, this description is inaccurate, to put it mildly. It’s hard to count the times that the American driver pulled the weary Palestinians to the trough and at the last minute they found it was nothing but a fata morgana. Last month, I mentioned several Israeli-Palestinian agreements reached over the years with US mediation, the main articles of which were never implemented. The positions presented publicly by American presidents were also discarded. The most prominent of these belonged to President Barack Obama.

In his May 2011 speech at the State Department, he declared, “While the core issues of the conflict must be negotiated, the basis of those negotiations is clear: a viable Palestine, a secure Israel. … We believe the borders of Israel and Palestine should be based on the 1967 lines with mutually agreed swaps, so that secure and recognized borders are established for both states. The Palestinian people must have the right to govern themselves, and reach their full potential, in a sovereign and contiguous state.”

Despite all this, following heavy US pressure, Palestinian President Mahmoud Abbas agreed in July to renew negotiations with Israel without recognition of the 1967 borders as the basis for the talks. He also gave up the demand that Israel freeze construction in the settlements, as mandated in the road map bearing the signature of former President George W. Bush. To this day, the Palestinians (and the Israeli public) have not heard from Israel’s prime minister the number 1967. In January, they noted his promise that he does not intend “to evacuate any settlements or uproot a single Israeli.” The Palestinians also saw numerous new houses pop up in the settlements in the West Bank and East Jerusalem at the height of the negotiations over their fate.

Palestinian Authority (PA) President Mahmoud Abbas and his officials have announced that they have no intention of going beyond their request to join 15 international organizations and would not allow a breakout of violence. Israel, on the other hand, reacted to the Palestinian move with threats of economic sanctions, which would further diminish the already poor quality of life of the territories’ residents. The lethal combination of not paying the salaries of some 160,000 officials and security personnel combined with frustration over the backtracking diplomatic process could bring about the collapse of the PA. The breakup of the PA security apparatus could result in a Hamas takeover of the Palestinian street. The third intifada could boil over and extend beyond the occupied territories, as the 2014 model of relations between Arab regimes and their people was completely different from the ones of 1987 or 2000, when the first two intifadas broke out. The United States will be able to credit itself with yet another resounding failure in the Middle East arena.

Israel is not bothered by the contents of all those treaties. Israel’s most right-wing administration ever opposes any move that hints at recognition of a Palestinian state. But the president of the United States should take Netanyahu up on his June 2009 Bar-Ilan speech in support of a two-state solution.

“In the heart of our Jewish Homeland now lives a large population of Palestinians. We do not want to rule over them,” the prime minister said. “We do not want to run their lives. We do not want to force our flag and our culture on them.” He unveiled to the world his “vision of peace:" "In this small land of ours, two peoples live freely, side by side, in amity and mutual respect. Each will have its own flag, its own national anthem, its own government."

In November 2012, the UN recognized Palestine with an overwhelming majority as a non-member observer state. The skies did not fall. The occupation continued and negotiations were even renewed.

In order to end the occupation and save the negotiations, Kerry must present the sides with an accelerated timetable for the acceptance of Palestine as a full-fledged member of the UN. Until then, the sides will have to reach agreements about land swaps, arrangements in Jerusalem and the refugee problem based on the Arab Peace Initiative. If Israel keeps barricading itself behind unfounded demands such as Palestinian recognition of a Jewish state and opts to expand settlements, it will become the occupier of a UN member state. From there, the road to the International Criminal Court in The Hague will be very short. On the other hand, if we continue the traditional dance — one step forward and two steps back — we will all fall flat on our faces.