Critics accuse educational tours to the sites of the Iran-Iraq war of indoctrinating students and promoting tourism on unsafe roads. 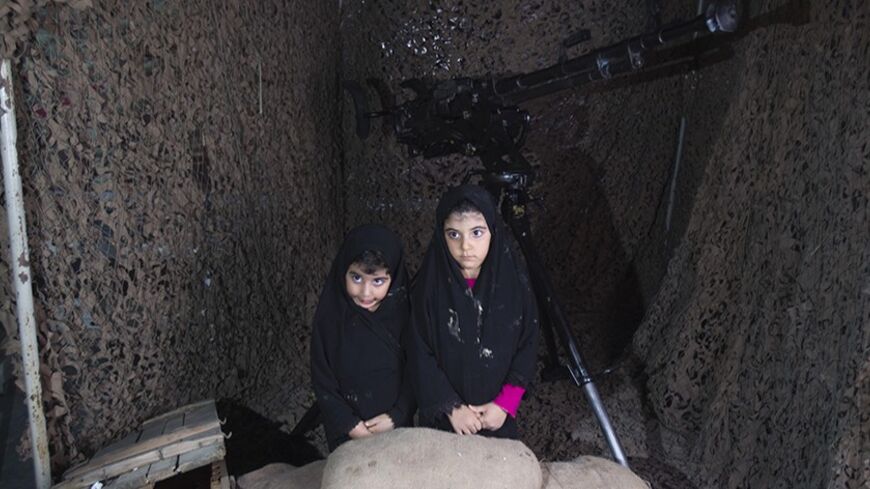 Two girls pose for a photograph as they sit at a mock shelter at a war exhibition held by Iran's Basij militia and revolutionary guard to mark the anniversary of the Iran-Iraq war (1980-88) at a Revolutionary Guards military base in southeastern Tehran, Sept. 23, 2010. - REUTERS/Morteza Nikoubazl

TEHRAN, Iran — Rahian-e Noor (Path of Light) is the name given by military organizations, such as Sepah and Basij, to tours that throughout the year take visitors to areas that were once the heart of the battle during the Iran-Iraq war. Critics of these tours, however, say that the tours are meant to indoctrinate and are upset that a shocking number of traffic accident fatalities have occurred en route to these sites, so much so that the tours have earned the nickname, Rahian-e Goor (Path of the Grave).

On March 17, a few days before the start of the Nowruz holidays, which is the busiest time of the year for these tours, the supreme leader of the Islamic Republic of Iran, Ayatollah Ali Khamenei, appeared among the staff responsible for conducting these tours. “Certain incidents that occur from time to time during these trips should be prevented,” Khamenei said. “However, these incidents should not be used as an excuse for questioning this important and beneficial activity in its entirety.”

What the leader of the Islamic Republic is referring to by “certain incidents” might be one of the most shocking traffic accidents of the past few years in Iran. In mid-October 2012, a bus overturned in southwestern Iran and 26 passengers were killed and 18 more were injured. Passengers on the bus were a group of female high school students from the city of Borujen, in the province of Chaharmahal and Bakhtiari, who were returning to their city after a visit to one of the Rahian-e Noor camps in Khuzestan.

On March 25, there was yet another fatal accident resulting in loss of life. The chief of police has confirmed that the majority of those killed in the accident were “boys,” suggesting that they were mostly teenagers and students.

It is notable that the websites with close ties to Sepah or Basij have either only briefly mentioned this news or, similar to the official website of the Rahian-e Noor, have chosen not to mention it at all.

Yet, another fatal accident involving students in one of the Rahian-e Noor tours is a misfortune for Ayatollah Khamenei as well, since he, too, was headed for Khuzestan, according to his official website, to “appear among thousands of pilgrims who came with the Rahian-e Noor tours to visit the battlefield sites on the east bank of the River Karun where the siege of Abadan was broken,” and deliver a speech. He delivered his speech exactly 24 hours after the bloody incident. However, the leader of the Islamic Republic chose not to comment on the incident.

A political activist who is also a war veteran told Al-Monitor, “I think that this recent buzz, Khamenei’s recent trip to the battlefield sites, and his strong support for this organization all indicate that he feels the need to reorganize and activate Basij forces. The victory of Hassan Rouhani, who enjoyed the decisive support of the members of the Green Movement and the leaders of the reform, such as the former presidents [Mohammad] Khatami and [Ayatollah] Hashemi [Rafsanjani], might have made the supreme leader worried. He wants to be ready and one way he can prepare himself is to activate the potential forces that exist among the Rahian-e Noor visitors.”

Several people who have either been on the Rahian-e Noor tours or have sent family members say that there is a heavy ideological and educational aspect to these trips that is not even related to the Iran-Iraq war. The tours include ideological classes in which the students are exposed to anti-sedition and anti-Green Movement propaganda, the movement that started after the 2009 contested elections. Students are told that the Islamic Republic is being threatened by a velvet revolution and that the United States is trying to start a soft war to overthrow the Iranian government.

Rahian-e Noor was officially founded in 1997 by the student branch of the Basij. However, after Ayatollah Khamenei gave his support to the organization and personally went to visit the Iranian-Iraqi front in 1999, the Iranian armed forces incorporated the Rahian-e Noor organization. It turned into a military camp after Ayatollah Khamenei took another trip to the former war zones in 2002. In 2005, by the order of the leader of the Islamic Republic, the Foundation for the Preservation and Publication of Sacred Defense Works and Values, a subdivision of the Sepah, took charge of the Rahian-e Noor organization.

During Ahmadinejad’s presidency, the minister of education, in hopes of making these tours more popular, made it mandatory for students to participate in the camps. In the case of absence, each student would lose 10 points from his military service preparation grade. While Rouhani has not taken a public position on the tours, he and his chief of staff, Mohammad Nahavandian, declined invitations to visit these sites for special memorials, a point that Soleymani felt worth mentioning in an interview with Fars News last month.

Currently, the Rahian-e Noor organization is headed by Brig. Gen. Ali Fazli, a high-ranking Sepah official, with Brig. Gen. Yaghoub Soleymani as the secretary of the organization.

The commanders of the Sepah are quite eager to show that the Rahian-e Noor tours are popular. On March 8, Soleymani asserted that each year about 4,500,000 visitors visit the former war zones with the tours. His claim sounds quite exaggerated. The youth population of Iran (ages 15 to 24) is currently about 19.2 million. Therefore, if Soleymani’s claim is accurate, one out of every five young Iranian spends time in the Rahian-e Noor camps.

There have been at least nine accidents in the Rahian-e Noor tours in the past six years alone. The majority of the victims of these accidents are students and university students. In late 2008, 22 people were killed after a bus collided with a fuel tanker. The passengers, students of Mashhad University, all burned to death. Two weeks later, 27 more people were killed in yet another accident.

In 2012, after the accident in which the female students from Borujen were killed, citizens in social networks and media outlets critical of the organization strongly protested the continuation of these tours. However, Mohammad Reza Naqdi, commander of the Basij, said in response to the protests that “those who have a media outlet at their disposal should watch their language, instead of accusing those who serve in this organization.”

After these protests, as winter approached and later when it was once again time for elections, these tours became less popular. However, Ayatollah Khamenei personally traveling to the battlefield sites in the beginning of 2014, the coordinated support of high-ranking military officials such as the commander of the Sepah, commander of the Basij, the commander of the Law Enforcement Forces and the chief of staff of the Iranian armed forces for the Rahian-e Noor camp, indicate that the government is serious about the idea of “making new forces” to use against their social and political opponents.