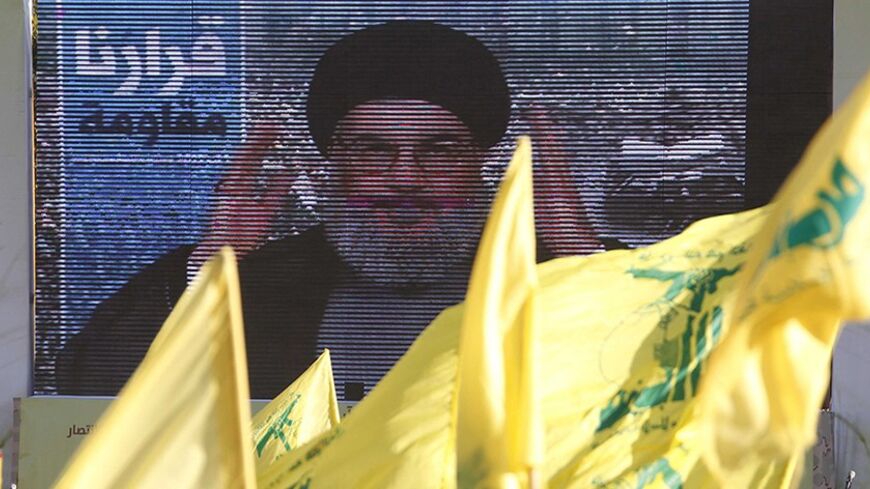 Lebanon's Hezbollah leader Hassan Nasrallah addresses his supporters via a screen during a rally on the seventh anniversary of the end of Hezbollah's 2006 war with Israel, in Aita al-Shaab village in southern Lebanon, Aug. 16, 2013.

A Hezbollah sanctions bill expected to be introduced shortly in the House would allow the Treasury Department to target central banks and other financial institutions that "knowingly engage" with the US-designated terrorist group, according to a draft summary of the bill obtained by Al-Monitor.

The Hezbollah International Financing Prevention Act, according to the draft, "takes a comprehensive approach to one of the greatest threats to the United States." It will be introduced by Reps. Mark Meadows, R-N.C., and Brad Schneider, D-Ill., both members of the House Foreign Affairs panel on the Middle East, and is backed by committee Chairman Ed Royce, R-Calif., and ranking member Eliot Engel, D-N.Y., greatly boosting its chances of becoming law.

"It broadens financial-sector sanctions against Hezbollah; forces other critical designations regarding the terrorist organization; and, targets their media appendage al-Manar," the summary says. The bill also states that it is US policy "to prevent Hezbollah's global logistics and financial network from operating in order to curtail its domestic and international activities."

Al-Monitor first reported last week that the House Foreign Affairs panel was working on the legislation, which would put great pressure on Lebanese and European banks in particular to track Hezbollah. The bill is seen as a way for Congress to undermine a key ally of President Bashar al-Assad in Syria while also targeting Iran, Hezbollah's main sponsor, without running afoul of the Obama administration's request to lay off new nuclear-related sanctions while diplomatic talks continue.

"The United States must deal with Hezbollah firmly and decisively with unyielding resolve by crippling its extensive, illegal financial network,” Meadows said in an emailed statement. “Hezbollah’s days of unhindered criminal operations and terrorist activity are numbered.”

Schneider added that the militia "continues to represent a threat to the United States, Israel and the entire region."

The bill contains four main sections, according to the summary:

• Hitting Hezbollah's financing: This provision provides the administration with the tools to pursue relentlessly foreign banks — including foreign central banks — that knowingly engage in business with Hezbollah and its enablers.

• Designating al-Manar's enablers: This provision forces the administration to list satellite providers that still carry Hezbollah's television station — which has already been designated by the United States as supporting terrorism. It would then require that the administration explain why those providers have not been penalized for providing material support to Hezbollah's al-Manar though the facilitation of its broadcasts.

• Designating Hezbollah as a narcotics trafficking organization: This provision requires the president to submit a report to Congress within 30 days of enactment with a determination as to whether Hezbollah meets the criteria for designation under the Foreign Narcotics Kingpin Designation Act. Given Hezbollah's reported systemic use of narcotics trafficking networks for fundraising, this provision calls attention to the role those activities play in supporting Hezbollah financially.

• Designating Hezbollah as a transnational criminal organization: This provision requires the president to submit a report to Congress within 30 days of enactment with a determination as to whether Hezbollah meets the criteria of a transnational criminal organization. Given Hezbollah's reported engagement in money laundering, trafficking in stolen or counterfeit goods and other criminal activities, this provision calls attention to the role they play in supporting Hezbollah financially and forcing the administration to take action.

Meadows has been a longtime critic of Hezbollah. When Secretary of State John Kerry was making the case for military strikes against Syria last year, the congressman asked if the use of force authorization would also cover the Shiite militia.

"Would you see them as an acceptable target?" Meadows asked Kerry at the Sept. 5, 2013, hearing.

"No, the president's authorization does not apply to Iran or Hezbollah or other entities," Kerry answered. "It is solely focused on degrading and preventing of the use by the Assad regime."