Hamas considers Turkey a vital ally and held rallies in celebration of the ruling Justice and Development Party's election victory. 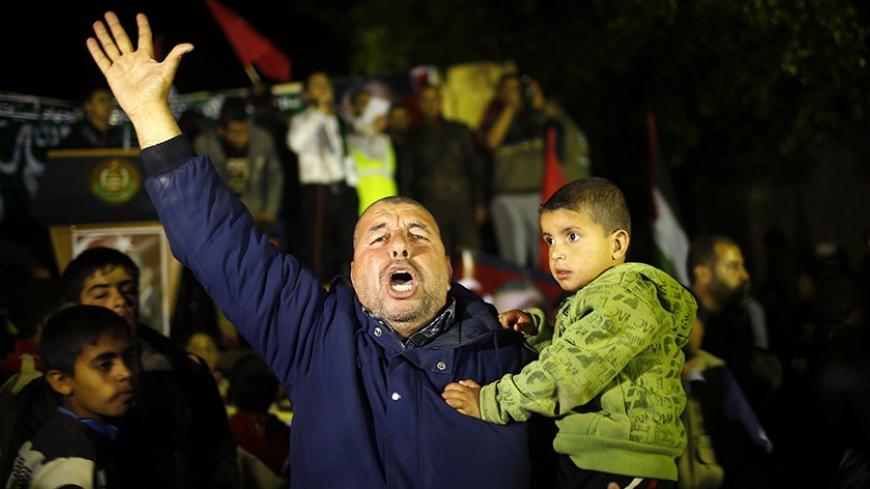 GAZA CITY, Gaza Strip — Hamas, at all levels, did not hide its joy regarding the victory of the Turkish Justice and Development Party (AKP), led by Prime Minister Recep Tayyip Erdogan, in last weekend’s municipal elections. Hamas leaders made a slew of congratulatory calls and sent cables to the Turkish party’s leadership, reflecting the close relationship that binds the movement with the Turkish ruling party.

Thousands of Hamas members in the Jabaliya refugee camp, in the northern part of the Gaza Strip, took part in a mass rally on the evening of March 31, called for by the movement to celebrate Erdogan’s election victory. Some rally participants handed out sweets to express their joy, as did some members of Hamas’ Palestinian police in the city of Rafah in southern Gaza.

Meanwhile, social networking pages of Hamas activists were flooded with congratulatory statements for the victory of the AKP, as well as pictures showing Hamas leaders with Erdogan.

Political analyst Akram Atallah told Al-Monitor that Hamas is “searching for a ray of hope to restore the psychological balance in the ranks of the political Islamic alliance, which has started to lose in the region since last summer. Hamas celebrated the victory of the Justice and Development Party, which shows that it is searching for an opportunity among all these setbacks suffered by political Islam in the region.”

Turkey is the only NATO country that officially welcomes Hamas leaders and backs the movement politically. Furthermore, Ankara endeavors to open lines of communication between Hamas and other countries.

Bassem Naim, an adviser to the Hamas government prime minister for foreign affairs, explained to Al-Monitor that the secret of the relationship between the two parties lays in the fact that Turkey supports Hamas politically, contrary to other states that are pressuring Hamas. Moreover, Turkey publicly admits to its political support for Hamas. It also demands an end to the blockade imposed on the Gaza Strip, considering the latter a precondition for a complete return to normal relations with Israel, according to Naim.

“There are ideological and political points of intersection between us and the AKP, despite the fact that we are convinced that Turkey is working to advance its own political interests, which serve our interests as well. This is in addition to its efforts to lift the years-old blockade imposed on the Gaza Strip. As a result, we have nothing but praise for Turkey, which explains our clear support for Erdogan and his government,” he said.

In addition to its open political support, Turkey offers the Gaza Strip financial support for the building of some infrastructure projects, in addition to training and consultancy services for government officials. However, these services ceased after the fall of the Muslim Brotherhood’s regime in Egypt and the new Egyptian regime’s decision to bar Hamas leaders and members from traveling through the Rafah crossing.

A Hamas leadership source, who spoke to Al-Monitor on condition of anonymity, revealed that hundreds of administrative level government employees traveled to Turkey last year to receive diplomatic training and training in administrative and media duties. This in-depth preparation aimed at ministers and their deputies as well as director-generals led to a marked improvement in the performance of the Gaza government, according to the source.

“As a large and experienced country possessing great diplomatic and crisis management experience, Turkey had a lot to teach us through training seminars and field visits organized to its various institutions. But, unfortunately, all that stopped when the Rafah crossing was closed,” the source said.

Hamas’ support for Turkey comes at a time when Ankara is close to resuming ties with Israel, which has raised some eyebrows in the Gaza Strip.

Naim said Hamas understood Turkey’s need to follow its political interests, and doesn’t believe it will be at the expense of Hamas. “Turkey’s relationship with Israel is not something that brings us joy, and we ask all nations to sever their relations with Israel. It does not seem as if Turkey would use Hamas as a scapegoat to rectify its relationship with Israel; yet, we understand the nature of political interests in the region and the world,” Naim said.

Another Hamas source, also speaking to Al-Monitor on condition of anonymity, said, “We are certain that the restoration of relations between Turkey and Israel will not affect Turkey’s support for Hamas. The Mavi Marmara set off toward Gaza with Turkish governmental support when relations were normal. There are constant calls between Hamas leaders and the Turkish prime minister and his foreign minister regarding the progress of dialogues. The last of these calls was between [Prime Minister Ismail] Haniyeh and Erdogan after the latter won the municipal elections, and Erdogan filled Haniyeh in on the details of the dialogues with Israel.”

However, the same Hamas source said that Hamas might benefit from Turkey opening up to Israel, “in case of an escalation or a need to convey messages [from Hamas] to Israel, especially following the deterioration of the relationship with the current Egyptian regime. This also strengthens Turkey’s relations with European countries, when it supports Hamas’ stances, demands opening dialogue with Hamas and supports the Muslim Brotherhood in Egypt.”

In this sense, Turkey helped Hamas and its leadership open lines of communication with Western officials, to explain Hamas’ position vis-a-vis various issues, in the quest to remove the movement from the list of terrorist organizations.

The source continued, “With Turkish mediation, we met many current and former diplomats and officials in Ankara and Istanbul, and used our meetings with them to make our case for the removal of Hamas from the list of terrorist organizations, which would help bolster security and stability in the region. And Turkey offered clear support for our position.”

Hamas and Turkey had similar stances on several regional issues, especially regarding the ousting of former Egyptian President Mohammed Morsi. The two sides also met eye to eye regarding the Syrian crisis and Hamas’ and Erdogan’s support for the revolution against Syrian President Bashar al-Assad’s regime. Erdogan had announced in 2013 that he benefits from the experience of head of Hamas’ political bureau Khaled Meshaal in Syrian affairs, and both have good relations with Iran, which Gulf countries demand be isolated.

The Islamic movement’s joy at the victory of Erdogan’s party in local Turkish elections might be justified in light of the political pressure it has endured, following Morsi's ouster and Hamas’ exit from Syria. The overall picture in the Arab region has witnessed a decline in the political Islamic alliance of Turkey, Qatar and the Muslim Brotherhood that Hamas joined. But the fact that Erdogan and his party will remain in power for a few more years gives Hamas some hope that it might overcome its successive political crises with the least possible losses.