Hamas is pursuing a policy of neutrality while it reaches out to regional capitals to end its crippling isolation. 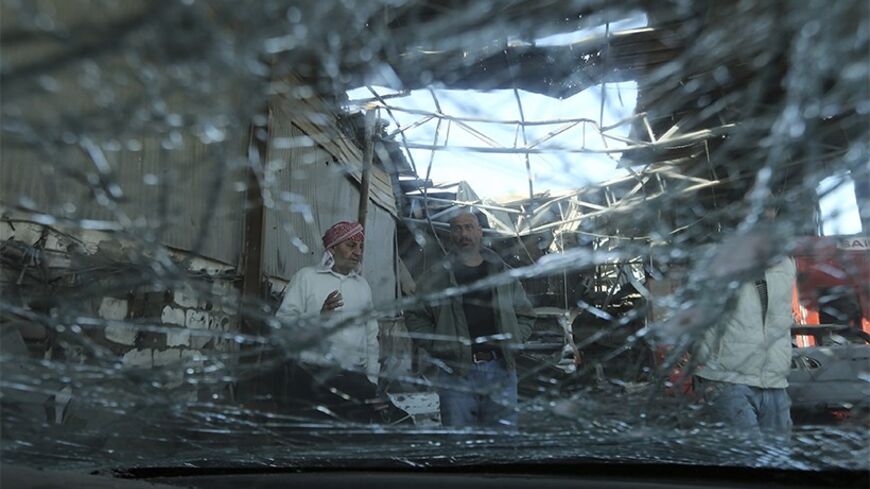 Palestinians are seen through a shattered car window in the Gaza Strip, April 4, 2014. - REUTERS/Mohammed Salem

It is no secret that Hamas has been trying to rebuild its relations around the region which have deteriorated in recent years, most notably those with Iran, as a result of its stance vis-à-vis Syria, and with Egypt, following the overthrow of the Muslim Brotherhood.

Al-Monitor learned that as part of the effort to break Hamas out of its isolation, Gaza Prime Minister Ismail Haniyeh made eight telephone calls to Arab leaders during the first week of April. On the receiving end were the emir of Qatar and his father, the presidents of Tunisia and Yemen, the prime ministers of Malaysia, Jordan and Morocco, as well as the foreign minister of Saudi Arabia.

Furthermore, on March 25 Hamas leader Khaled Meshaal sent a letter to the emir of Kuwait explaining the situation in Palestine. On April 11, a Hamas delegation visited Lebanese Information Minister Ramzi Jreij to discuss its support for the neutrality of the Palestinian camps in Lebanon and its rejection of their use to undermine the state's security.

Hamas delegations had also visited Lebanese political forces in late February and early March. They ventured into Christian areas for the first time to clear the Palestinian name after a spate of suicide attacks in which some Palestinians were alleged to have participated.

Al-Monitor learned from a source that Meshaal might soon visit Beirut, following an anticipated trip to Tehran, to meet with Hezbollah Secretary-General Hassan Nasrallah in the wake of the deterioration in relations between the two factions. In an interview with Al-Monitor, however, a senior Hamas official with close ties to Meshaal denied the existence of “arrangements for such a visit to date, despite him welcoming the turning of a new page with all allies.” Al-Monitor has previously reported on the completion of protocol arrangements between Hamas and Iran and the restoration of financial backing by Tehran for Gaza.

On April 14, Haniyeh spoke with the Egyptian intelligence services by phone, informing them of the developments related to Palestinian reconciliation. He expressed his appreciation for the role Egypt has been playing in the effort and his hope that it would continue to provide sponsorship.

A prominent Hamas official living outside Palestine told Al-Monitor that the movement’s “regional relations had undergone severe tests, and it is now endeavoring to open lines of communication with all Arab factions. This is in order to establish positive relations with them, irrespective of their political orientations and ideological preferences, as well as to pronounce its readiness to deal with Islamic, Christian, leftist, and liberal forces, which accused it of being biased toward Islamic movements and neglecting the rest.”

Hamas remains focused on three strategic objectives, according to a senior official who spoke with Al-Monitor on the condition of anonymity. “Recently, the main objectives of the movement have been focused on ending the regional isolation, finding a financial safety net to ease the situation in Gaza and communicating with the European Union in a bid to remove the movement’s name from the list of terrorist organizations,” the source said.

A British decision in early April to review the Muslim Brotherhood’s activities, following Saudi Arabia and Egypt’s designation of the group as terrorist, may, however, limit communications between Hamas and the West. A Palestinian figure who serves as a mediator for meetings between Hamas and Western officials informed Al-Monitor that meetings have not been held between the two parties in recent months. He said this was due to several reasons, most notably the campaign being waged against Islamists in the region, the negotiations between Palestinians and Israel and the Europeans' refusal to engage Hamas as long as they oppose the peace talks.

A financial official from Hamas spoke to Al-Monitor about the economic crisis that intensified in Gaza after the tunnels to Egypt were closed and Iranian support severed. He expressed optimism that more funds would flow into Gaza in light of the revival of ties with Iran. In early April, the Hamas government disbursed half the salaries of its 50,000 employees after failing to pay them for several months.

Al-Monitor obtained access to an undated internal Hamas document issued in recent months among a very small circle, reviewing the mistakes made in its relations with Arab countries. It observed that the movement was “not part of the internal Arab political system, which necessitated that it disengage itself from it, requiring that it carefully tread a difficult and fine line.”

“The new challenge in Hamas’ regional relations presents the movement with a great task to make use of the existing contradictions among Arab countries, and their differing interests, while guarding against falling into the trap of exploitation and servitude. As a result, in the coming period, it will be required to establish balanced relations with their governments and avoid raising their ire because of its relations with opposition groups therein,” the analysis asserted.

The document postulated, “In light of the rupture that afflicted Hamas’ relations with Arab and allied countries in the past years, the movement is required to address its regional differences with a great deal of patience, refrain from espousing accusatory policies, and adopt the language of objective criticism and appeals. This should be done without [burning] any bridges — irrespective of the circumstances — and without directing accusations at any countries, opening additional fronts or targeting the media of other countries.”

Izzat al-Rashq, a member of Hamas’ political bureau who resides in Qatar, affirmed, “The goal of liberating Palestine governed the movement’s relationship with various countries. Hamas continues to distance itself from the game of axes and will not ally itself with anyone against anyone else, nor will it be dependent on anyone.”

On the other hand, a senior Jordanian official who served as a mediator between Hamas and a number of Arab capitals, told Al-Monitor on condition of anonymity, “The movement will face difficulties in restoring its regional relations. This is because the countries in question — Iran, Jordan, Saudi Arabia and Egypt — were not totally amenable to such an improvement, but also had not completely shut the movement out.”

Al-Monitor learned from influential parties within Hamas that it has asked the Muslim Brotherhood for a wide margin to maneuver in the restoration of its regional ties and that it not be dragged into the crisis concerning the Brotherhood’s ties to Arab states. This demand was met, with the goal of helping Hamas restore the relationships that existed prior to the Syrian revolution. Back then, Brotherhood members in Syria were pursued by the regime and sentenced to death, while Hamas was a decision-maker in the state. Hamas was then able to forge ties with Arab regimes independent of the predicament of the Muslim Brotherhood.

“I expect the relations to undergo a tug-of-war,” the Jordanian official said, explaining that Hamas fears being manipulated by regional powers. “One Arab country might keep Hamas busy with side meetings under the promise of restoring relations, while another might try to create opposing factions inside the movement. Yet a third might keep it leashed to financial aid and convince it to remain calm and sensible, with a fourth playing hardball with it.”

The Jordanian official warned, “The main hurdle before the restoration of Hamas’ regional relations lies in its association with the Muslim Brotherhood and its attempt to distance itself from accusations of damaging existing regimes that harbor political hostility toward the Brotherhood.”