Field Marshal Abdel Fattah al-Sisi’s candidacy in Egypt’s upcoming presidential elections has eased tensions between Cairo and Hamas, but this might be a tactical move by Sisi. 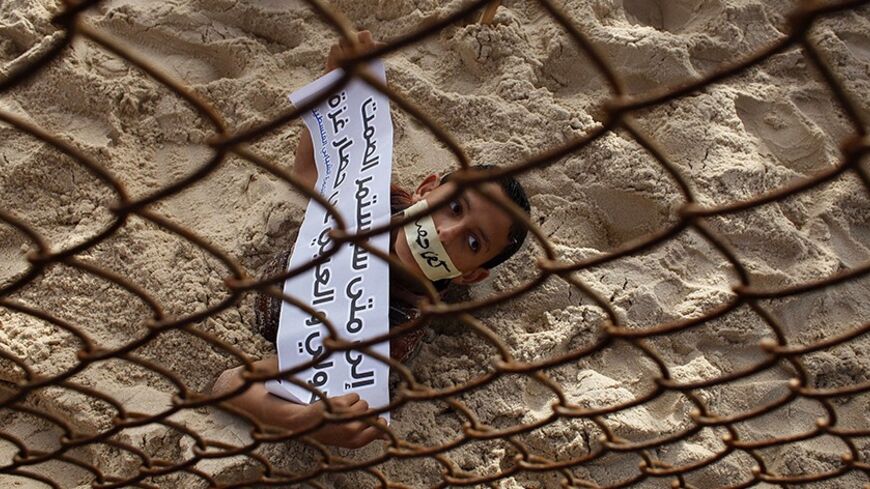 A Palestinian boy takes part in a protest against the blockade on the Gaza Strip, at the border between Egypt and Gaza, March 7, 2014. - REUTERS/Ibraheem Abu Mustafa

Egypt’s March 4 decision to ban Hamas' activities, confiscate its property and close its headquarters in Egypt represented a worsening of their relations, which had been deteriorating since the July 2013 military coup that overthrew the Muslim Brotherhood government of President Mohammed Morsi. The past few days, however, have brought political developments and actions suggesting that Hamas and Egypt, fearing the unpleasant consequences, do not want matters to descend into a full-on confrontation. In one earlier example, participants at a Hamas-sponsored March 23 rally raised Egyptian flags in the central Gaza Strip.

It was reported in March that unnamed figures from the Gulf had contacted the Egyptian army at Hamas’ request to mediate between the movement and Cairo with the goal of improving relations. The Gulf figures quoted Hamas as wanting to turn a page with the army on the condition that Egypt retract decisions designating the movement a terrorist organization and allow its members to be present in Egypt to manage the group’s affairs. In turn, Hamas promised not to interfere in Egypt's internal affairs. Hamas sources would not confirm or deny these reports when approached by Al-Monitor.

Moussa Abu Marzouk, vice president of the Hamas political bureau, asserted recently to Al-Ray that his organization is keen to have contacts with Egypt and keep channels between them open, as Hamas’ interest lies with whomever the Egyptians choose to govern them. He described what is happening in the Sinai Peninsula as “terrorism,” from which Hamas-controlled Gaza has suffered, and noted that the smuggling of arms was and still is from the Sinai to Gaza, not in the other direction.

A Palestinian security official in Gaza told Al-Monitor, “Despite a ban on Hamas by Egypt, there is still coordination between them at the level of controlling the security situation on the Sinai border. Cairo asked the Gaza government to replace its security forces along the border. Palestinian national security members have not left the border with Egypt and have thwarted several smuggling operations over the past few days.”

“There is minimal communication between the Gaza government and Egyptian intelligence, especially at the field level and regarding daily needs, such as opening the Rafah crossing. Cairo cannot do without Hamas, especially on security issues, making the issue of border protection a strong card in Hamas’ hand,” the official added. He stressed that Cairo's security agencies recognize that Hamas has not endangered Egyptian security and that Egypt had thanked the movement for controlling the border.

In late February, Hamas had praised former Egyptian Defense Minister Mohamed Hussein Tantawi when he denied that Hamas elements had entered Egypt without the knowledge of the armed forces. On March 27, Al Jazeera published 17 pages of leaked documents from the Egyptian Department of Military Intelligence signed by Maj. Gen. Mahmoud Hijazi. The documents called for the intensification of communication with Hamas to preserve security and stability on the Gaza border and did not include among them a charge that Hamas had harmed Sinai security. The Egyptian army issued no clarifications on the documents.

In an interview with Al-Monitor, Hamas spokesman Fawzi Barhoum claimed that the documents “categorically affirm that the movement has nothing to do with the internal affairs of Egypt and that [Hamas] is protecting Egyptian national security through controlling the border with the Gaza Strip. The documents are a definitive answer to all the charges made against Hamas.” He therefore demanded on these grounds that the inflammatory media campaign against Gaza come to an end.

A prominent Egyptian journalist who spoke on condition of anonymity informed Al-Monitor that Egypt “has refused to renew the residence permit of Abu Marzouk in Cairo that expires in late April. He lives in the fifth district east of Cairo with his family, which is just a short distance from the home of ousted President Mohammed Morsi. He received a license to build [his home] from the Supreme Council of the Armed Forces, headed by its former head, Tantawi, and he met there with Egyptian ambassadors, officials and politicians.” The source also noted, however, “Abu Marzouk has assurances from the Egyptian General Intelligence Service that they will not harm him.” He denied rumors that Abu Marzouk is being barred from traveling.

Al-Monitor further learned that Hamas had sent a message to the Arab summit held in Kuwait March 24-25 that outlined the movement's political positions and demanded that the blockade on Gaza be eased. The message prompted Egypt to announce a temporary, three-day opening of the Rafah crossing, after a closure of almost 50 days.

Iyad al-Bazam, spokesman for the Hamas government's Interior Ministry, was quoted as saying, “The opening of the crossing is a good step, but insufficient for the time being. It doesn’t meet the minimum humanitarian needs for travelers, because among the stranded are 10,000 humanitarian cases and 1,200 patients in need of urgent operations who are suffering from cancer as well as heart, kidney and liver problems. What’s required is for the crossing to fully open.” Al-Monitor has been informed that Egypt will again open the Rafah crossing in the coming days to facilitate the travel of pilgrims to the Hijaz to perform Umrah.

Positive moves between Hamas and Egypt have coincided with former Defense Minister Abdel Fattah al-Sisi's decision to run for the Egyptian presidency. The question in Gaza concerns his efforts to present himself as someone who wants to open a new chapter with Hamas. In keeping with its declaration not to interfere in Egyptian internal affairs, the movement has not commented on Sisi's candidacy, a Hamas official pointed out to Al-Monitor. When asked whether Sisi truly wants to reconcile with Hamas or is merely engaged in temporary tactical maneuvering, the official responded cautiously, “Let’s wait and see [Sisi’s] policy on the ground.”