Get ready for the next Erdogan decade

It seems that Turkish Prime Minister Recep Tayyip Erdogan's game plan is to rule Turkey in a very centralized and personalized presidential system at least until 2024. 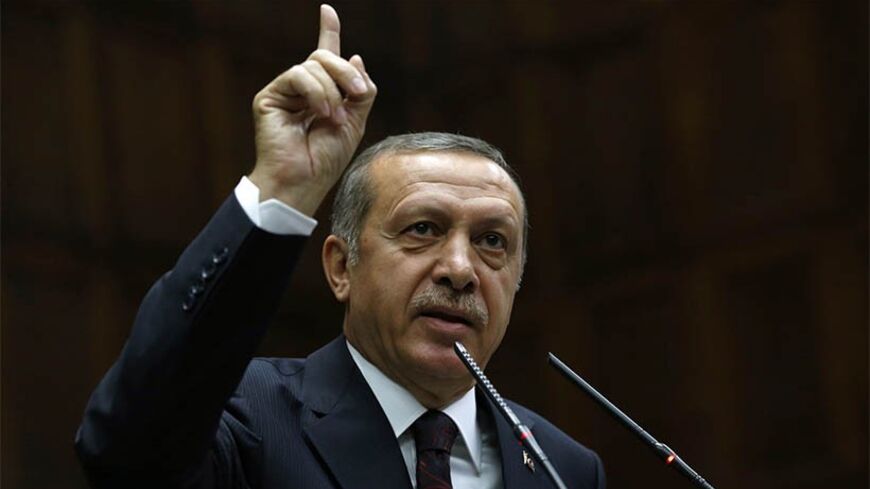 Turkish Prime Minister Recep Tayyip Erdogan addresses members of parliament from his ruling Justice and Development Party during a meeting at the Turkish parliament in Ankara, April 8, 2014. - REUTERS/Umit Bektas

Last week, Turkish President Abdullah Gul declared to the press, "Under these conditions, I don't have plans for politics." This was widely interpreted as an end to expectations that Gul, somehow, would keep sharing power with Prime Minister Recep Tayyip Erdogan after the presidential elections in August. Now many believe that Erdogan will win the elections to become the first popularly elected president of Turkey, and there will be no Gul to balance him.

One may wonder why Gul is so important. As one of the two founders of the Justice and Development Party (AKP), Gul has not simply been an ally and "brother" of Erdogan, but also the only name in the AKP universe that could afford to openly disagree with him. It is no wonder a number of differences have emerged between them in the past few years. In the face of the Gezi Park protests, for example, Gul advocated for moderation and dialogue, whereas Erdogan opted for defiance. Gul opposed the recent bans on Twitter and YouTube that Erdogan ordered and defended. In addition, Gul dismissed the conspiracy theories about foreign plots against Turkey, one of the main themes in Erdogan's new political rhetoric.

That is why most of Turkey's liberals had hoped that Gul, a religious conservative with liberal views, would continue either as president, or more likely, as prime minister under Erdogan. The "Putin-Medvedev model," as some have called it, has now, however, been declared dead upon Gul's remarks.

People wonder why Gul backed off. My understanding is that he realized two bitter facts. First, accepting the prime ministry under Erdogan would imply accepting his unquestionable authority, which Gul is loath to do. Second, challenging Erdogan would be political suicide, because of Erdogan's unshakable popularity among the religious conservatives that also form Gul's base. Thus, it seems, Gul made both an honorable and a rational decision by stepping aside.

With Gul gone, what will Erdogan do? The prevalent expectation is that he will run in this August's presidential elections to become Turkey's first directly elected president. (Previous presidents were elected by the parliament.) Erdogan needs a simple majority either in the first round, in which all the candidates participate, or the second round, in which the two top vote-getters compete. It is not yet known who the other candidates will be — the opposition parties must be working hard on that these days — but it seems likely that Erdogan can win the elections, at least in the second round, given the 45% his party secured in the recent local elections and the possible add-ons: the votes of the Islamist Felicity Party (around 2%) and those of the Kurdish nationalists (around 6%), with whom Erdogan has built an alliance thanks to the "peace process" with Kurdish separatists.

If Erdogan is elected president, what will he do? Well, first of all, this will give him a solid five years in power. Then he could win a second term, in 2019, extending his presidency to a decade. He plans to rule, in other words, until 2024, if not beyond. That is why he often speaks of his "goals for 2023," the centennial of the Turkish Republic and, in this context, the ninth year of his upcoming decade.

What about the prime ministry, the post which, according to the current constitution, holds the real executive power? The common expectation is that if Erdogan becomes president, he will appoint a loyalist to this job, someone who would accept his ultimate authority. (Current speculation in Ankara centers on Foreign Minister Ahmet Davutoglu and Numan Kurtulmus, a relatively recent import to the AKP.) In this case, Turkey will be heading toward a de facto presidential system in which Erdogan will hold the real power.

Erdogan could, however, move on to a de jure presidential system if he can find a way to change the constitution. For that, he needs at least 330 seats in the parliament. The AKP now has 313, but a new AKP-proposed electoral law would provide further advantage to the most powerful party and thus hand the AKP even more seats given its current popularity. If the next general elections, which are scheduled for summer 2015 but could always be rescheduled, are held under the new system, the AKP could easily gain enough seats to change the constitution. Needless to say, the pivotal aim in any such AKP-induced constitution will be to further empower the presidency, i.e., Erdogan.

If Erdogan can realize the transformation to the presidential system that his advisers have been advocating, it would amount to the most significant Turkish revolution since Kemal Ataturk's. Erdogan, in fact, would be as powerful as Ataturk, controlling the executive and legislative branches. He would gradually prevail upon the judiciary as well, because the president has the power to appoint members to the Constitutional Court and other key institutions. He would even be able to appoint all the presidents of Turkey's universities, because the universities are controlled by the Supreme Education Board, an institution that a military junta created in the 1980s. (Turkey's generals, who devised a centralized and overarching state, naively believed this huge body would always remain in their hands.) Meanwhile, the media will probably feel the need to become more supportive of, or at least amenable to, the all-powerful president.

In short, it seems to be Erdogan's game plan to rule Turkey for at least 10 more years under a very centralized, if not personalized, presidential system. Of course, whether he will be able to do that is another question. He is not a dictator, so he needs to win votes. First, he needs to win the presidential elections in August and then consolidate power as president and win again five years later.

Can he do all this? He probably can, especially if the economy flourishes and if the opposition continues to be incompetent. We will, of course, see. What is certain is that this will be one of the most impressive — and for some, worrying — experiments in political history.