Erdogan needs to subjugate the Central Bank and the judiciary if he wants to win the presidency. 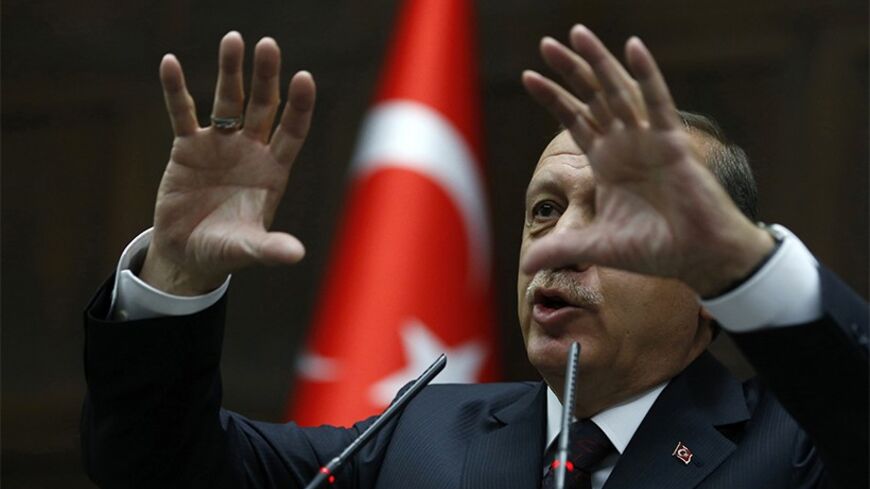 Turkey's Prime Minister Recep Tayyip Erdogan addresses members of parliament from his ruling Justice and Development Party (AKP) during a meeting at the Turkish parliament in Ankara, April 8, 2014. - REUTERS/Umit Bektas

On Tuesdays, the political leaders of Turkey gather their parliamentarians in meetings in the parliament building and lecture them. There, they feel free to insult other parties and engage in fiery polemics. Many TV channels cover Prime Minister Recep Tayyip Erdogan’s addresses live. Key segments of the speeches of the other three parties' leaders are also covered.

The print media doesn’t have to go looking for news on Tuesdays, for the Tuesday speeches provide ample content to fill the country’s political agenda for a week.

For a long time, Erdogan has used his outstanding oratory skills to launch attacks over this forum. The targets of Erdogan’s toxic language determine the short-term political agenda of the country.

On April 15, the judiciary was the target of the prime minister’s fury. What most recently enraged him was the release of six police officers and two military personnel who had been arrested for stopping a number of trucks operated by Turkish National Intelligence (MIT), allegedly en route to Syria to assist the rebels there.

Before the elections, searching the MIT trucks was portrayed as the outcome of the fight between Erdogan and US-based Islamic leader Fethullah Gulen and between their extensions in state security agencies. Erdogan accused Gulen’s disciples in the police and judiciary of being a “state within a state” and labeling them a “parallel structure,” which he eventually linked to an international conspiracy against his person. He went as far as saying that the trucks stopped not far from the Syrian border were part of that conspiracy, which he further dramatized by calling it an espionage operation.

Following the changes in the judiciary appointments, the government prosecutor called for the detention of security personnel who had stopped the MIT trucks carrying undisclosed equipment to Syrian rebels. But a judge overturned the arrests and released the detainees, thus becoming a target of Erdogan’s fury.

Erdogan was already outraged with the decision by the country’s Supreme Constitutional Court to overturn the Twitter ban as well as some key clauses of the Supreme Council of Judges and Prosecutors (HSYK) law. The HSYK bill had prompted criticism from the European Union and concern in the US State Department over the possible eradication of the freedom of the judiciary and the disregard of the fundamental separation-of-powers democratic principle.

The release of the detained police in Adana added insult to Erdogan’s injury. According to T24, he repeated his former allusions to medieval Iran’s “assassins” to describe Gulen's supporters and, bizarrely, accused the Adana judges who overturned the arrests of “submitting to blackmail and smoking too much hashish.” He said, "When we talk of these gangs in the judiciary, some get up and accuse politics of interfering in the judiciary. In Adana, there was blatant espionage activity. And the gangsters who had infiltrated the judiciary, never mind keeping quiet, had the gall to decide for the benefit of spies.” He added, "Those who ignore these crimes, those who cover them up, will definitely pay. We will clean the courthouse corridors of those gangs."

Erdogan’s impassioned oratory not only fed speculations of a witch hunt in Turkey but were also interpreted as an impending onslaught against the judiciary. Tensions in the country did not ease with the local elections on March 30, but escalated.

The decisions by the Constitutional Court to overturn the Twitter ban and some articles of the HSYK law and then free the detained police in Adana can well be interpreted as resistance by the judiciary against Erdogan or, in other words, resistance of the state against the government.

Erdogan has been accused of taking steps to eliminate the remaining governmental checks and balances. Following the disarray in the military, once considered as the watchdog of old republican elites, he may well have encountered a new line of resistance from the judiciary. This could be a signal that there is still a formidable line of defense against the monopolization of power in Turkey.

Erdogan, who already suffers from a siege mentality toward the outside world, is extremely uneasy with the restrictions on his room to maneuver. In the same speech, he said, "Some judiciary and security personnel of this country engaged in treason against their land in a way that will put Turkey’s most dedicated enemies to shame. A different sort of operation was launched abroad with some reports, news and columns. They came forth with baseless accusations of Turkey’s involvement with the chemical attack in Syria. They wanted to create the impression that Turkey was supporting terror. We also witnessed other treason attempts. In EU circles not familiar with Turkey, there was black propaganda against us, also in the United States. These are continuing.”

Although Erdogan doesn’t appear to be lessening his bluster toward the EU and especially the United States, one can also say that his words indicate his sensitivity toward Western attitudes. But Erdogan’s main concern with the West is economic. He knows well that he owes his sustained effectiveness domestically and abroad to economic success. Economic deterioration could bring with it talk of doomsday scenarios in the West. Signals in this arena have not been good in recent days. Concerns are growing about Turkey's economy after Moody's cut its debt-rating outlook from stable to negative. The financial rating agency blamed political uncertainty for the change, and the downgrade comes at a bad time for Turkey's prime minister, who is expected to run in the August presidential election.

Lowering its outlook means Moody's has doubts about Turkey's ability to repay bonds in the future. Even though Moody's overall debt rating for Istanbul remains at investor grade, a downgraded outlook could make it more expensive for the country to issue new bonds.

The government has said one of its greatest achievements is that financial rating agencies have ranked Turkey's international debt as investor grade, which helps attract foreign investment and cuts borrowing costs.

Market watchers warn that with investors becoming more hesitant about emerging markets, Erdogan will have to carefully balance his presidential ambitions against the sensitivities of the financial markets.

The timing of this warning, which came just as Erdogan called on the governor of Turkey’s Central Bank to lower interests rates, thus prompted questions about the bank's independence. The independence of the central bank is one of the most important pillars of the reforms introduced by economist and former administrator of the UN Development Program Kemal Dervis and became instrumental to Turkey’s recovery after the 2001 crisis. Therefore, any interference in the bank’s independence will cause deep unease in financial markets.

Erdogan has begun his uphill trek to the Cankaya Presidential Palace, 1,071 meters (3,513 feet) above Ankara. To “conquer” Cankaya, he feels the need to overcome two key institutions of the Turkish state: the Central Bank and the judiciary.

Hard choices. Formidable obstacles. No easy task for Erdogan to fight on two fronts, simultaneously. It seems, however, that as long as he thinks himself as invincible, he will surely try.