Egypt's ruling military regime is promoting an exclusive Egyptian identity that refuses to acknowledge any differences in society. 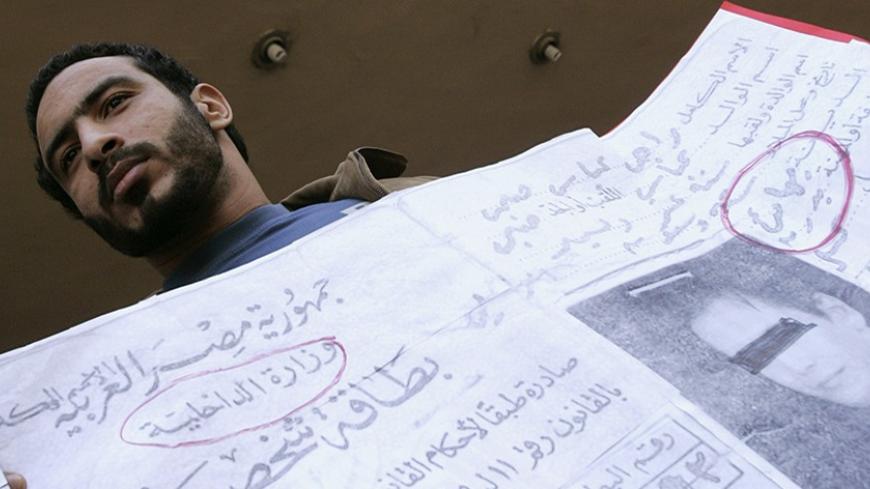 A demonstrator holds placards featuring Baha'i identity cards at a protest in front of the Court of the State Council in Cairo, Dec. 16, 2006. - REUTERS/Nasser Nuri

CAIRO — They can do it in the bathroom.

This is how former presidential hopeful Mortada Mansour believes Baha'is and atheists should “practice.” He said he doesn’t accept either group in Egypt, and they should keep their beliefs behind closed doors.

His words should not be dismissed as the ramblings of a notoriously foulmouthed celebrity. He spoke the mind of many Egyptians when it comes to freedom of faith, freedom of expression and accepting differences. Egypt’s constitution and laws cement these ideas into implementable state policy.

Only the Abrahamic faiths are acceptable as openly practiced religions. Believers of other faiths can practice their religions, but only in private, and have to keep their beliefs a secret. Years in courts have only won Egypt’s Baha'is a meager compromise: the right to ID cards with a blank space in the mandatory religion field, instead of being forced to falsely identify themselves as Muslim, Christian or Jewish. Even this victory still faces obstacles on the bureaucratic level. Marriages are not recognized by the state since it only accepts religious, not civil, unions. Paternity, inheritance and other issues stemming from this lack of recognition is a constant legal nightmare that disrupts their daily lives.

Those who support the legal situation — a mix of religiously and politically conservative citizens who fall on either side of the current political conflict — would, if pressed, admit that such policies prevent those of different — and unacceptable — faiths from freely living their lives. They vocally encourage implementing such policies in various forms on other religious minorities, such as Shiite Muslims, and on political opponents as well.

Their Egypt ends up a contrived reality that resists change and refuses to acknowledge the differences among its citizens. This deception is both a conscious choice and a delusion. It requires many sectors of the population to refrain from disrupting the make-believe world, whose inhabitants insist is real and reflective of the majority. To conform is to eventually relinquish unacceptable ideas and faiths.

The defense of this reality doesn’t stop in the public sphere, and has a history of invading privacy. Shiites can be arrested if they congregate in a private home for any ritual, and face charges of setting up an illegal house of worship. Four were dragged out of one such congregation and killed by angry villagers in Giza last June. Even Christians praying together in places outside licensed churches can lead them into legal trouble and make them targets of attack by their fellow citizens.

Our courts are filled with cases in which citizens were accused of "contempt of religion" and a host of similar charges for expressing their beliefs, or lack thereof, in private circles or through their social media profiles. Blogger Alber Saber was sentenced to three years in prison in 2012 for just that.

The prying eye of the state doesn’t stop there. Sexual practices are also under scrutiny. Four men were arrested at a private apartment in Cairo and sentenced this month to eight years in prison for debauchery.

The social repercussions of attempting to force this reality of false hegemony range from resentment and sectarian tension to violence. The latter becomes more tangible when it comes to politics.

Long before the Muslim Brotherhood was overthrown in July 2013, both its supporters and its opponents believed the organization's success could only come through the complete elimination or at least suppression of its opposition. The Brotherhood looked for a landslide victory, whether in elections or otherwise, that would somehow crush and silence its opponents. When the Brothers were on the losing side last summer and led a wave of street protests against former President Mohammed Morsi’s ouster, others just wanted them to shut up, to accept the new reality and move on.

As the differences played out in the streets in clashes and deadly crackdowns, the government maintained that the country had never been more united, its willingness to use force to construct this claimed reality notwithstanding.

The protest law issued last November aimed to silence opposition — Islamist or otherwise. The restrictions it imposed on venues of political expression have impacted networking and promoting ideas, but only temporarily. Islamists have continued to protest, despite arrests and killings, and more secular-leaning movements intermittently test and push the limits of state control to reach out to more followers. The attempts to enforce silence have not led to the disappearance of dissent, nor the extinction of repressed ideas.

An April court verdict banning Muslim Brotherhood members from participating in the elections will hamper the group’s political reach, but it doesn’t mean that thousands, if not hundreds of thousands, of voters who had previously supported the group would vanish into thin air.

The fact that this magical disappearance and silence doesn’t and hasn’t worked and that it has consistently backfired — all too easily, in a vast and varied population like Egypt’s — has gone over the heads of everyone in power. The Muslim Brotherhood refused to acknowledge its opposition while in power, and the army that ousted it on the pretext of exclusionary governance is doing the same now. We are doomed to endure this cycle, of which violence has become a major characteristic.

Many Egyptians are toeing the line, but many more are challenging notions of conformity, even if just through hairstyle and attire. Atheism is more widely discussed than before, sometimes even debated in mosques. The mere existence of voices challenging the vigilantly guarded belief in a monochrome Egypt are bursting the bubble of those who refuse to acknowledge change and tolerate diversity. Unfortunately, this vigorous resistance is costing everyone dearly on all fronts, delaying and obstructing processes that people could develop to deal with these changes and integrate themselves within a mutable world.