The deputy at Iran's drug prevention agency recently estimated that half of government employees may be using drugs. 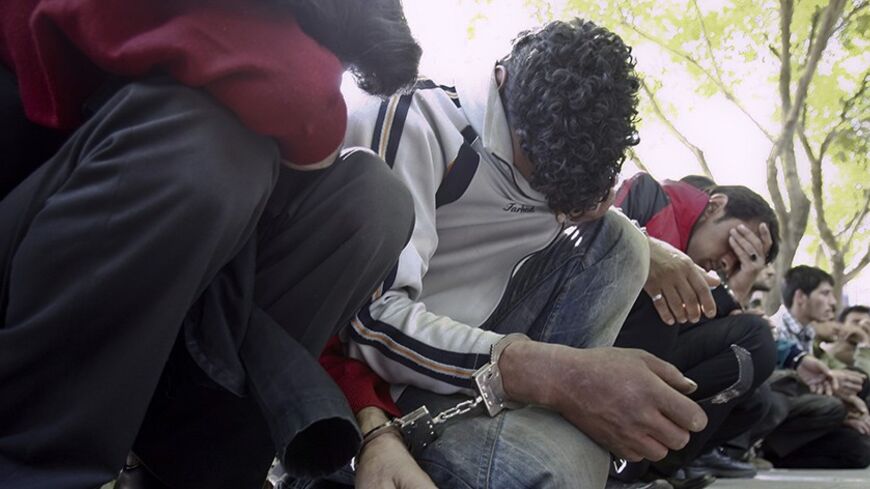 Handcuffed suspects sit on the ground after officers arrest and detain suspected drug users and dealers during a sweep in a southern neighborhood of Tehran, April 7, 2009. - REUTERS/Jamejam Online/Chavosh Homavandi

TEHRAN, Iran — Babak Dinparast, the Deputy for Treatment and Prevention of the Iranian Anti-Drug Agency, visited the National Institute of Addiction Studies at the Tehran University of Medical Sciences two weeks ago. During the visit, he released the latest statistics on the rate of addiction in Iran. The numbers can potentially be considered alarming for the government and administrative structure: Dinparast said 53% of the drug users in Iran are employed by government agencies and organizations.

In March of last year, Dinparast had given the number of people in Iran suffering from drug addiction to be 3.5 million people. However, he had said that most of these were recreational users. On the number of serious users, he said “based on the latest count which was collected with the help of Jahad Daneshgahi (The Academic Center for Education, Culture and Research), we have 1,325,000 addicts.”

Even if we discount the 3.5 million and go with the number of 1.3 million, and considering the latest announcement, this means that 703,000 current employees of the Iranian government are drug users.

Iran is a country with an extensive and complicated bureaucracy. With a population of close to 78 million people, about 2 million people are considered government employees. The exact number of permanent and contractual employees is not known and different numbers are often given for them. For example, in 2009, President Mahmoud Ahmadinejad’s assistant secretary for labor and job creation said, “The number of government employees has increased from 849,000 in 1979 to more than 2 million today, of whom over 80% are permanent and contractual.”

Forgetting the official numbers and using simple math, we can see that out of every three government employees one is addicted to drugs.

An Iranian sociologist told Al-Monitor, “These numbers are shocking. I am completely surprised. We know that drug addiction is quite widespread in Iran. We also know that many government employees are among the addicts. But the numbers presented by Dinparast, if real, are signs of an extensive disaster in the Iranian bureaucracy and state administration. This is an octopus extending its tentacles all over the system, threatening to destroy it.”

The 2013 annual report of Transparency International about administrative and economic corruption says that Iran, among the 177 countries surveyed, ranks 144th. In 2012, Iran was 133rd in this ranking. The average productive work hours rate for Iran is not that encouraging either. Based on a report of the Research Institute of Parliament, the rate is about 22 minutes a day.

Ali, an employee of the Power Grid Authority in District Five of Tehran, used drugs for seven years and has been clean for three. He said, “If you are on a drug languor, you don’t want to do anything. You treat the clients with impatience and tension. Apart from all this, when you are on drugs, you become susceptible to illegal acts. You easily lean toward backdoor deals and accept bribes without thinking about it. You most certainly have no sense of duty and just want to avoid work.” He added, “I don’t have numbers, but well, many of my colleagues used drugs. Of course, most of them were the old, permanent employees.”

On the other hand, Shirzad Abdollahi, scholar of sociology and a pedagogy expert, is not very sure of the numbers that have been presented. He told Al-Monitor, “It is not clear what the phrase ‘our addicts’ in the speech given by this government official (i.e., Dinparast) means. Is this referring to people who go to rehabilitation centers or to the total number of drug addicts in Iran?”

He believes that there is no context for the study or details of the methodology used for collecting this data and that exaggerations, or minimizations, have crept in, based on the interests of different government branches. Most numbers released by agencies are filtered and sifted, based on the “best interest of the system,” he said.

Abdollahi, himself a former employee of the Ministry of Education, said, “I can tell you confidently that an image of 350,000 drug users does not match my experience and the general environment of schools in the country. I even doubt there are these many teachers smoking cigarettes. Of course, there are a number of serious, long-term drug users among the teachers, and more of them using drugs recreationally.”

However, the director of a rehabilitation camp in Tehran, on condition of anonymity, told Al-Monitor, “Many of the people coming here to get clean are indeed government employees. These are good, decent and hardworking people who were addicted to drugs. Most of them were addicted to opium and are middle-aged, wishing to kick the habit.”

Based on Article 8 of the second chapter of the Code of Government Conduct, use of or addiction to drugs is an offense prosecutable by law. The code of conduct of the Ministry of Work and Social Insurance also defines two types of offenses in the work environment: Type one encompasses the kinds of offenses that can be considered oversight or error, such as “disrespect to the norms of the sacred Sharia of Islam or the regulations of the Islamic Republic” or “smoking in unauthorized zones.” The second type, part of which is drug addiction, is defined thus: “Felonies and offenses which can have a punitive side” based on which the addiction of an employee can result in suspension or dismissal of the employee.

But the numbers presented by Dinparast can indicate that inside the administrative structure of Iran, there has not been a willingness to solve the problem of drug addiction and its apparent spread among the employees of the Iranian government agencies.

Despite the evident importance of the issue, none of the high-circulation publications of Iran have focused on it in the past few days. This might be because, like Abdollahi, they were expecting “the data regarding the rate of addiction among government employees to be corrected by the Anti-Drug Agency.”

The fact is, however, that a week after the release of these numbers, neither Dinparast nor any other authority at the Anti-Drug Agency has attempted to correct the initial allegation.