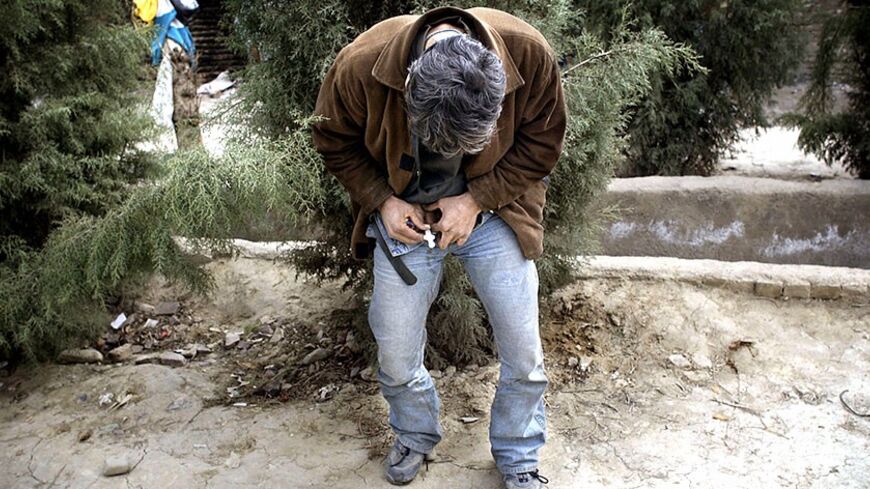 Drug addiction is widespread across Iran. It plagues populations of all ages, from drivers to bazaar vendors to government employees and even college students. Various government policies have been tried to address the matter but so far have failed to lower the numbers of addicts. A large share of these failures is due to faulty perspective and policies in confronting this social phenomenon.

Drug addiction has not been considered a crime since the drug-law reform in 2010. According to Article 19 of Iran's drug law, someone who abuses drugs without suffering from addiction should be punished. Before 2010, addicts were treated as criminals, but addiction itself is no longer considered a crime. Addicts might be punished for other infractions such as abusing drugs in public.

A deputy at the Drug Control Headquarters of Iran announced that 47% of the country’s professional drivers are in direct contact with drug traffickers. In an interview with Al-Monitor, a judicial official in Tehran province also declared that nearly half of criminal cases are connected with the drug use, possession, dealing or transportation. As for addicts, although they ought, according to the law, to be made to abandon drug consumption, there is a lack of adequate resources for this because there is such a small number of rehabilitation centers in the country, and the courts do not get involved in this issue.

This judicial official said that addicts are condemned only if they are guilty of another crime, such as dealing, transporting or storing drugs. Similarly, in some cases, addicts who have been warned and caught again are convicted and sentenced to lashes.

In addition to government-run rehabilitation centers, there are also many private centers active in Iran. These centers must be licensed by the State Welfare Organization of Iran. According to studies and surveys conducted by the Drug Control Headquarters issued last December, more than 600 drug rehabilitation centers are recognized across the country, most of which are based on the outskirts of cities. Because of the immense physical and psychological suffering of addicts, private addiction rehabilitation clinics recommend family-centric medical treatment under expert supervision.

Dr. Said Kafrashi, the manager of one of these rehabilitation clinics, said in an interview with Al-Monitor that structured and well-rounded treatment is crucial. Overcoming drug addiction involves more than just eliminating dependency on consumption. Rather, addiction creates a lifestyle for those afflicted by it, and the situation must be treated by improving the addict’s life skills. Due to an erroneous perspective about treating addiction, said Kafrashi, nearly half of treated addicts return to addiction.

The Ayandeh Clinic, run by Kafrashi and  specialists, takes in between 150 and 200 referrals per month, and its manager admits that the clinic has reached its saturation point. But with an eye toward reducing the expenses of treatment and establishing resources for more patients, he also provides online and telephone consultations. When asked if this particular clinic's approach heralds the spread of addiction among educated social classes with Internet access, Kafrashi was hesitant to jump to such a conclusion, but said nearly 50% of his referrals are college educated.

Addiction in Iran is also rising among women. The problem has reached the point of testing young men and women before they get married to determine whether they are addicts. Just a few years ago, such tests were only conducted on young men. Currently, nearly 10% of the country’s addicts are women, which is twice the proportion of three ago. Kafrashi observed similar figures in the women referred to his clinic.

Of course, addiction in Iran is more widespread than indicated by government or even unofficial statistics, since many who are addicted to drugs do not consider themselves addicts. Al-Monitor’s interviews with drug users suggest that they see absolutely no reason to abandon their habits. Many of them are even gainfully employed. One, a businessman in Tehran who has been smoking opium for five years, told me that drug consumption both relieves his stress and helps his business.

Kafrashi said that in many cases, first the addict’s family and then his or her wider social circle would go to the clinic to find a way to convince the addict to stop. Tougher penalties are not an efficient approach to controlling addiction. The judicial system must provide a mechanism which places the responsibility for addicts' behavior on their own shoulders and promote personal responsibility in society. In this way, the state would protect the addict’s family and circle against his or her delinquency and keep them safe from the risk of addiction. On the other hand, social and health organizations have come to the conclusion that drug denial and treatment in prison and clinics have failed up to now. Instead, a healthy lifestyle and certain life skills should be promoted in schools, the media and peer groups.