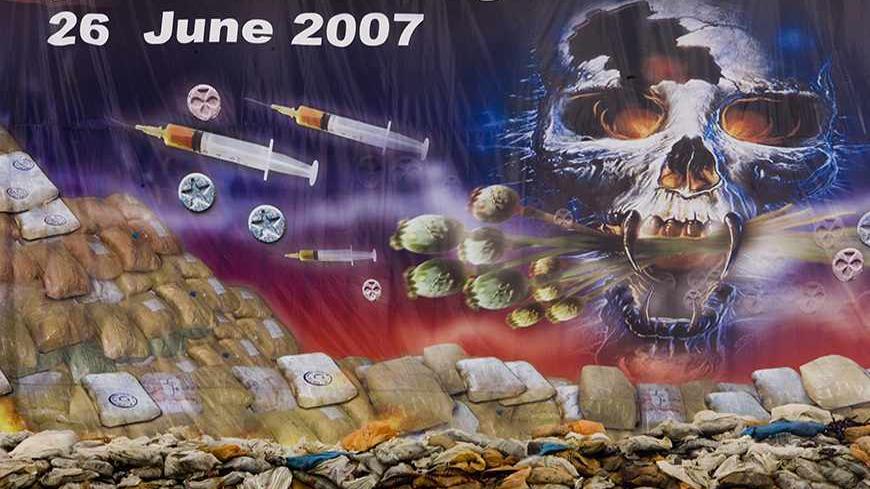 More than 70,000 kilograms (154,000 pounds) of drugs confiscated in the past year are prepared for burning during a ceremony to mark the United Nations' International Day against Drug Abuse and Illicit Drug Trafficking in northeast Tehran, June 26, 2007. - REUTERS/Morteza Nikoubazl

One of the socioeconomic challenges facing Iran today is extensive drug addiction, especially among the youth. Having Afghanistan — the world’s largest producer of opium — as a neighbor has turned Iran into a transit route for drug smuggling and consumption. Despite extensive efforts by the government to clamp down on drug trafficking and contain drug consumption, the issue continues to pose a major challenge to Iranian society on many levels.

The latest statistics in this field were presented during a conference in Ahwaz by the director-general of the office for research and training affiliated with the Iran Drug Control Program, Hamid Serami. In an unusually transparent presentation, Serami outlined the following statistics: Some 1.325 million registered drug addicts are in Iran, excluding those who consume drugs occasionally or those who have opted not to register with any of the existing programs. Of these addicts, 58% are younger than 34, 9% are women and 22% have higher education. As a result, some 10 million Iranians (direct relatives of the addicts) have to struggle with the consequences of drug addiction. Serami also outlined that drug addiction has killed an average of seven people per day over the past two decades and is the second leading cause of death in the country after road and traffic accidents.

Unofficial estimates put the number of hard-core addicts higher (up to 4 million), but the total number will always be a guess in a society like Iran. However, it is significant that state officials have started discussing the drug-addiction trends in society.

Another official, Alireza Akbarshahi, director-general of the office in charge of containing the supply of drugs, recently reported that in the first seven months of the current Iranian year, some 352 tons of heroin, opium, hashish and morphine have been confiscated by the police forces. He also announced that a total of 135,322 large and small drug traffickers had been arrested, a decline compared to the previous year. Furthermore, the police had arrested more than 26,000 drug addicts — a 15% rise compared to the same period last year.

It should be noted that drug addicts are not treated as criminals and that the government perceives them as ill citizens who need professional treatment. The above statistics indicate that Iran’s harsh treatment of drug traffickers (including capital punishment for major traffickers) has not managed to contain the problem. The fact that the majority of Iranian drug addicts are located in provinces and regions on the route of drug trafficking from Afghanistan to Turkey is an indication that Iran’s continued role as a transit route has further exacerbated the problem. Other realities that have certainly contributed to the scale of the problem are economic issues such as poverty and youth unemployment.

The total cost of this phenomenon to the Iranian economy is estimated to be $10 billion annually, considering that Iran runs a massive anti-drug campaign including methadone clinics, state-sponsored detoxification and rehabilitation centers and needle-exchange programs. There are also a large number of nongovernmental organizations (NGOs) that are designed to help reduce the addiction problem through professional treatments, often in collaboration with international organizations. International observers have commented that Iran’s drug treatment programs are among the world’s most progressive; however, the challenge is so huge that an improvement in addiction rates has not been felt yet.

Officials also argue that drug trafficking and distribution in the country has expanded online, and covers a much wider segment of society, especially the more educated and wealthy classes.

President Hassan Rouhani's government has declared the drug-control campaign an important priority, and announced that the government will extend greater support to NGOs that are active in this field. Furthermore, there are new components in the government’s approach to the issue, including specialized training for doctors in provincial regions on how they can identify and treat cases of drug addiction.

Iran’s Interior Ministry, which manages the drug-control program, has also reached out to international organizations and regional governments to secure support for containing the level of drug smuggling through Iran.

Another important step by the new government has been to promote a transparent debate about drug addiction to raise the issue in society. In fact, on Nov. 8, a live debate took place on prime-time television involving officials, police commanders, parliamentarians and sociologists. The participants agreed that a much wider and more sociocultural approach is needed to contain drug consumption in Iran.

Critics of Iran’s drug-control campaign argue that there are too many state institutions that are tasked with or interfere in anti-addiction responsibilities and that a more comprehensive structure would be needed to coordinate all efforts. Furthermore, they argue that the existing programs are too focused on the physical recovery of the addicts, as opposed to social re-integration, including job opportunities for the rehabilitated.

Evidently, any campaign trying to address such a huge challenge will have its flaws and bottlenecks. However, the decision of the new government to empower the civil sector and to work for more transparency on the scale of the issue will ease the current impact of the problem. In addition, the government’s growing attention to job creation as a main priority in addressing socio-economic challenges will also have a positive impact on the addiction problem.

Also, the international community could play a more constructive role. UN agencies and some of the European governments are already engaged in fighting drug trafficking in Iran and in the neighboring states, but international NGOs could also help in the field of treatment and rehabilitation of addicts. One major impediment in this field are the sanctions, which have barred transactions between Iranian and international NGOs. A greater engagement between Iranian authorities and NGOs on this important matter would not only send a positive signal to Iran, but would also help address the regional drug-trafficking issue that is also a threat to Western countries, especially as it continues to empower international organized crime.