The trafficking of weapons, drugs and human beings has become a major problem for Yemen. 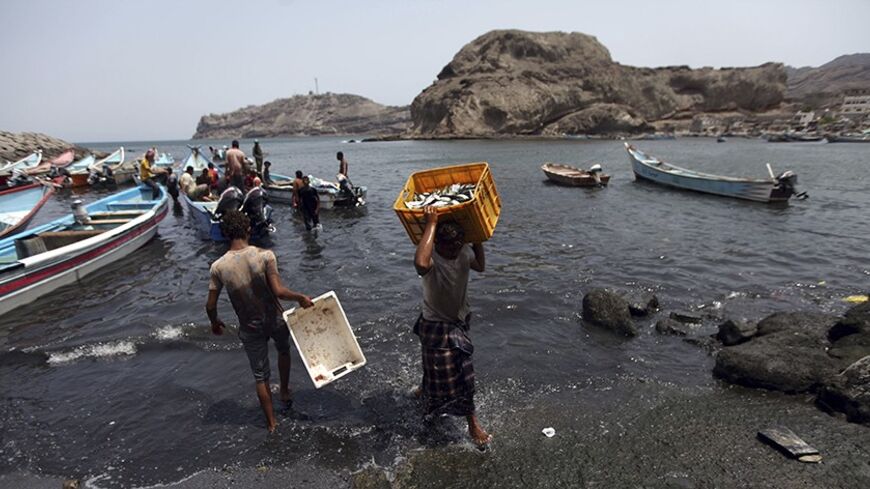 Fishermen transport fish from their boats in the southern city of Aden, situated at the mouth of the Red Sea, Aug. 22, 2013. - REUTERS/Mohamed al-Sayaghi

In late February, a Serbian citizen was arrested in western Yemen while trying to smuggle a sniper rifle and other items into the Mocha area. A few days later, a British citizen stood in a Yemeni court accused of smuggling Yemeni antiquities.

Smuggling in Yemen is no longer limited to Yemenis or regional smugglers — non-Arab foreigners engage in it, too. In the last decade, smuggling has significantly risen along Yemen’s coast and across its borders.

Yemen is a maritime country, with a coastline extending 2,200 km (1,367 miles). But Yemen’s army is not a maritime army. It is a ground army that is based in the mountains and deserts, while Yemen’s naval force lacks the bare minimum in equipment and hardware.

The Midi district, located on the Red Sea coast in northwestern Yemen, extends for 100 km (62 miles), but the security forces there complain of a weakness in their ability and capacity to control the port. Official bodies also complain that large arms shipments are entering through the port for the benefit of armed movements, especially the Houthi movement, which the Yemeni government has repeatedly accused of getting weapons from Iran.

Bab al-Mandeb — the strait connecting the Red Sea to the Gulf of Aden — is one of the most important waterways in the world. But it is also one of the most important ports for smuggling arms, drugs and people. Hardly a week goes by without contraband being caught passing along its long coast. The same goes for the port in Mocha, which lies between Bab al-Mandeb and Midi in the north. Mocha was Yemen’s most famous port for nearly half a century, but now it has become a port for smuggling goods in multiple directions. It is used for arms and drugs smuggling as well as human trafficking from the Horn of Africa. It is also an outlet to smuggle diesel from Yemen to ships waiting in international waters that buy the diesel at international prices.

The smugglers buy the diesel at low prices, because it is subsidized by the state in the western regions. This is a thorny and controversial issue, depriving Yemen of international aid. Yemen has not lifted its subsidies on fuel derivatives, and those subsidies lead to the smuggling of diesel because of the disparity between the subsidized and international prices. The smuggling of diesel harms the exactly parties that the subsidies were intended to help: farmers and factories.

During the past two years, dozens of ships loaded with weapons have been detected on marine demarcation lines. The most famous of those ships was Ceyhan 2, which was stopped in early 2013 and which the Yemeni government claimed came from Iran. It carried sophisticated weapons, including missiles and explosives.

Then, there was the discovery of several shipments of Turkish weapons, most notably the so-called “chocolate deal,” when a ship entered the port of Aden in November 2012 under the guise of shipping Turkish chocolate, only for the security services to discover that the ship contained tens of thousands of Turkish pistols equipped with silencers.

Another shipment with nearly 20,000 Turkish pistols, with silencers attached, was caught by a security station in early May 2013. The shipment was caught aboard trucks in the province of Hudeidah. The soldiers who made the discovery were honored by the state, but one of them was killed under mysterious circumstances days after being honored.

Smugglers do not smuggle just guns. Drugs and hashish are among the most common substances that enter Yemen from the southern coast, unlike weapons, which enter from the west.

Smugglers exploit security gaps to move their goods, which often head to the Saudi market across the land border with Yemen. Many in Saudi Arabia have the money to buy drugs of all kinds from Yemen. In a period of less than a month, several large hashish shipments have been discovered. One shipment intercepted in Hajjah province near the Yemeni capital Sanaa in November 2010 weighed 100 kilograms (220 pounds).

Humans are also being smuggled. The fact that Yemen lies between two contrasting regions — the extremely poor Horn of Africa and the very rich Saudi Arabia and the Gulf states — has made the country a transit station to smuggle Africans across Yemeni territory into Saudi Arabia, in particular. But in the last two decades, with the collapse of Somalia and the drought in Ethiopia, most of the smuggled Africans stay in Yemen.

Dozens of Africans are allegedly packed for days on small boats that do not allow those on board to move or lie down. Anyone who complains is simply thrown overboard for the sharks. The smugglers have zero compassion toward the unfortunate Africans. Of those Africans who make it to Yemen alive, many are smuggled to Saudi Arabia. There have been cases of Africans not keeping their promises to pay the smugglers and ending up being tortured, raped or killed, practices both genders are subjected to.

Smuggling in an unstable country will make it more fragile and bring it closer to death, especially if weapons make up the biggest part of the goods. Pistols with silencers have been found in connection to several assassinations in various cities. High explosives have been used in several terrorist attacks, most notably in the attack on the Defense Ministry's Al-Ardi complex, the heavily fortified building in the heart of Sanaa. No one knows what is next with regard to smuggling or what the smuggled items would be used for.

The west and south Yemeni coast is being used for smuggling, instead of being a window to the world and a source of wealth, the least of which is the abundance of fish species that could support thousands of Yemeni families. The Yemeni coast has turned into a window to bring all kinds of evils, conflicts and dirty trade into Yemen.