Red Sea countries are sounding the alarm as to the possible Houthis takeover of Bab al-Mandeb strait, by issuing initiatives to preserve the security of these states. 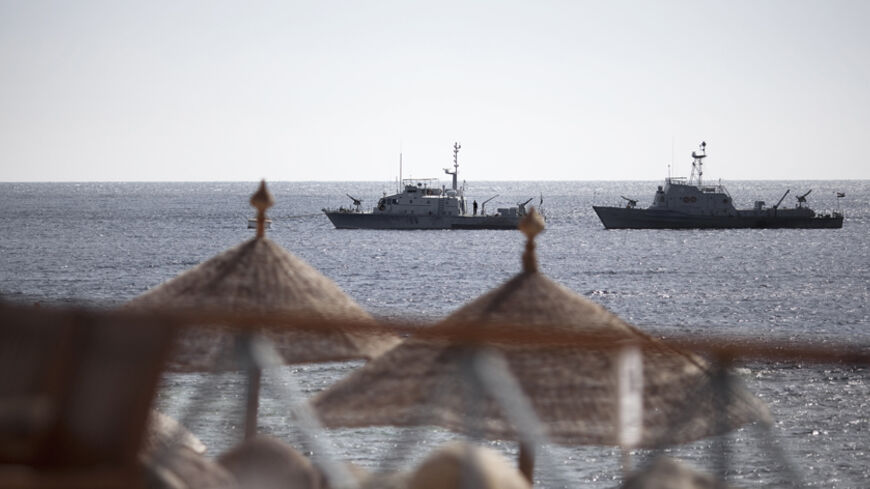 CAIRO — In light of the current crisis in Yemen and the control of Sanaa by Houthi armed groups, Egyptian experts predict that Egypt would intervene in the conflict to prevent the Houthis from gaining control of the strait of Bab al-Mandeb on the Red Sea, in defense of Egyptian and Gulf security.

Commander of the Egyptian navy, Osama al-Jundi, openly declared the navy's readiness to protect the country's territorial waters, economic interests and the Egyptian coast in all directions and to deal with any risks that might threaten them.

At the same time, a number of initiatives were launched in an attempt to ward off this war. Egypt and Saudi Arabia both received an invitation from Isaias Afwerki, the Eritrean president, to start negotiations to find a way to maintain the security of the countries along the Red Sea.

Former secretary-general of the Arab League, Amr Moussa, issued a joint statement with former Lebanese Prime Minister Fouad Siniora. They called for an Arab initiative to work on restoring the unity of the Yemeni army and mobilizing to restore security. In addition, they would eliminate all usage of weapons in Yemeni cities to move forward with the parliamentary elections.

Moussa and Siniora warned about the division in Yemen and the danger it poses to Arab security from the Red Sea and the Arabian Sea, if the Houthis, who are supported by Iran, reach Bab al-Mandeb strait.

The initiative was made by Moussa and Siniora after the failure of the Gulf Cooperation Council initiative for organizing the transition in Yemen, since the terms of this initiative were not implemented and most importantly, the restructuring of the Yemeni army never happened.

Siniora and Moussa's statement also mentioned former Yemeni President Ali Abdullah Saleh’s link to the ongoing events in Yemen, as well as his alliance with the Houthis in preparation for his return to power in an agreement for the joint management of the country.

According to the Eritrean ambassador to Egypt, Cairo welcomed Afwerki’s initiative to sponsor a meeting for the Red Sea countries to maintain security in the face of the Houthis. But, it did not take actual steps to implement it and did not call the rest of the Red Sea countries to negotiate measures needed to protect security in the region. The ambassador said that this is due to Arab concerns about involving Israel as one of the Red Sea states in the initiative. The Eritrean ambassador thus reiterated his country’s call to implement the initiative without including Israel.

Commenting on the Eritrean initiative, the Egyptian ambassador to Eritrea and former assistant to the secretary of state for African affairs, Mona Omar, told Al-Monitor that the Houthis' strength can never match the military power of one of the Red Sea countries (Saudi Arabia, Sudan, Jordan, Israel, Egypt, Eritrea and Djibouti). “I don't think that the threat posed by the Houthis to the Red Sea countries could spark a war in the true sense of a 'war,'” said Omar. She said, “Since this group is exactly like all terrorist movements that currently exist in a number of Arab countries and that are going to be eliminated.”

She added, “The issue of Somali pirates still casts a shadow on the Red Sea and there are still the naval fleets belonging to a number of countries at the entrance to the Red Sea. The Egyptian maritime patrol is indeed present in the Egyptian territorial waters and they [the Houthis] will be dealt with in the event that they cross the Yemeni territorial waters.”

Regarding the possibility of Egypt engaging in a war against the Houthis in the event that they pose a threat on the Red Sea region and the new Suez Canal project, security expert and founder of the International Terrorism Association, Gen. Rida Yacoub, told Al-Monitor, “This war may not be a direct military one, as is the case currently in the Sinai [Peninsula] between Egyptian forces and terrorist groups. It will be an indirect war between Egypt and the Houthis, through the support of the Yemeni army that will provide plans, ideas and intelligence data. It will also supply [Egypt] with the necessary equipment and techniques to get rid of the Houthis.”

He stressed that it would result in the arrest of groups, and Yemen would have to apply the same measures on the Houthis to prevent the establishment of a safe haven for them and the flow of money between countries. Moreover, Egypt and Yemen would have to be provided with modern techniques by the Counter-Terrorism Committee in the UN Security Council to eliminate them.

“Libya did the same with Ansar al-Sharia, and succeeded in having the Security Council issue a resolution for their elimination,” Yacoub said.

He added, “Egypt might resort to closing the Bab al-Mandeb strait — as it did during the Yom Kippur War with Israel in October 1973 — to prevent any communication between the Houthis and other terrorist groups in Egypt, and in Sinai in particular.”

On the subject of association by Iran’s Shiite regime with the Houthis in Yemen, security and strategic expert Maj. Gen. Hossam Sweilem told Al-Monitor, “Exactly as Iran controlled the power in Lebanon through the Shiite party Hezbollah, Iran is attempting to control the regime in Yemen through the Houthis, who are also Shiites.”

He said, “Egypt must anticipate and prepare to intervene militarily to prevent the Houthis closing the Bab al-Mandeb strait because it would put it under the control of Iran — like the Strait of Hormuz [in the Persian Gulf]. This would have negative effects on the Suez Canal and would make it a battle of life or death for Egypt. I do not think that the international community would allow this to happen."

Regarding the possibility of deploying international forces to maintain security in the Red Sea area, Sweilem said, “It is difficult and will not be allowed by either the Yemenis who dominate the eastern side of the Bab al-Mandeb strait, nor the Eritreans who control the western side.”

He added, “There is a military base and coastal Iranian missiles on the Eritrean coast. Sudan is one of the most important countries on the Red Sea and it has become so in part from this dependence on Iran. In addition, there are Iranian weapon factories in Khartoum, including the Yarmouk factory [that was bombed in October 2012].”

Many initiatives were presented to solve the issue of the Houthis reaching the area of Bab al-Mandeb and threatening the security of the Red Sea countries. However, none of them were effectively initiated. It is this that threatens the outbreak of military confrontations in the region in the event of the Houthis' anticipated arrival to the strait area.