Piracy and the rise of competing ports has cost Yemen’s Aden Port a lot of business. 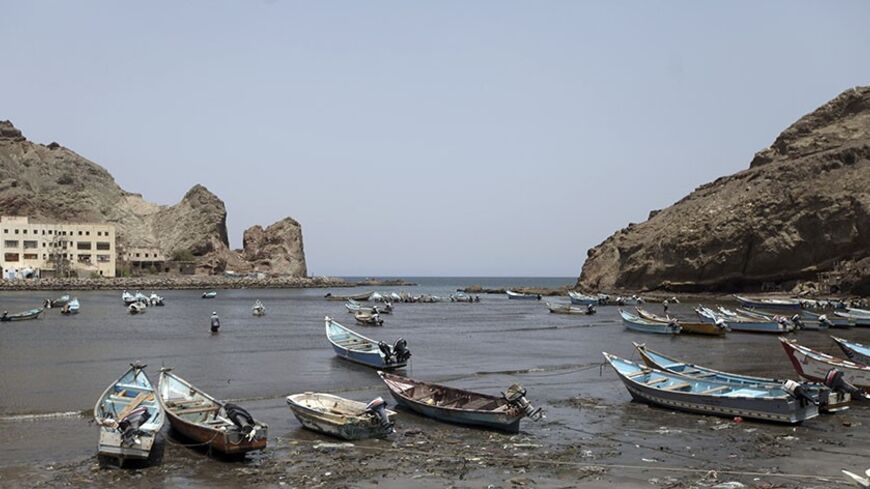 A general view of boats at a harbor in the southern city of Aden, situated at the mouth of the Red Sea, Aug. 22, 2013. - REUTERS/Mohamed al-Sayaghi

Yemen is a maritime nation par excellence. Although its surface area is less than 600,000 square kilometers (231,661 square miles), it has a 2,200-kilometer (1,367-mile) coastline on its west and south dotted by dozens of coastal towns, the most famous being Aden in the south on the Arabian Sea (which is connected to the Indian Ocean) and Hodeidah in the west on the Red Sea. Yemen’s most important ports are based in these two towns.

In 2008, the Yemeni government announced that Aden will witness an economic surge with the signing of a contract with Dubai Ports World (DP World) to manage the Port of Aden. However, the economic surge never happened.

During the last two decades, Aden has seen a series of mysterious deals regarding the operation of the port by international operators. Yemen’s treasury lost $200 million to compensate BIL Ship Management, which has operated the port for years. In 2008, there was another suspicious deal after long negotiations with international companies that submitted bids to run the port.

Various offers were made and the last competitive offers were between a Kuwaiti-Yemeni company and DP World, which operates nearly 43 ports around the world. The bid ended in a controversy involving Yemeni political and economic circles, including members of parliament and ministers in successive governments.

On Sept. 20, 2013, DP World officially handed over Aden port to the Yemeni government in return for $35 million. However, the conditions were unfair to Yemen, and the offer was less than what other companies offered, including the Kuwaiti company.

Dubai had not yet emerged on the map of world ports when the Port of Aden was ranked the third busiest port in the world (after New York and Liverpool) during the British colonial period. But since November 2008, Dubai has succeeded in monopolizing the management of the most important competing ports — which Dubai managed very well — and Aden was in Dubai’s grip. Yet, Yemenis do not expect Dubai to manage and develop Aden port and make it a competitor to Dubai, even if Yemen becomes a stable state in the region, and given its naturally deep waters that can receive giant ships.

However, Aden port was handed over to DP World despite competitors to Dubai making better offers. At the time, the media circulated reports that the deal was made by a senior official who received large bribes. That was confirmed to Al-Monitor by a senior Yemeni official, who was one of the government negotiators with DP World. He said, “Yes, Dubai would not have obtained the deal had things been done in a transparent manner. But high-level pressures forced us to reject better offers made by other companies.”

While this cannot be proved, for lack of supporting documentation, the way the deal was passed and the way the port was managed for four years (until September 2013) does not suggest the deal was legal. That is reflected, at least, by the fact that DP World did not comply with the agreement signed with Yemen for managing the port, as evidenced by the port traffic dropping to less than half before the handover, unlike what happened with the Port of Djibouti, which DP World also operates. Djibouti, which saw its yearly traffic increase, is a major competitor to Aden, but not to Dubai.

The Yemeni Minister of Transportation Waed Bathib (a native of Aden) said in a statement to the Yemeni press that DP World has played a negative role in the Port of Aden by neglecting to maintain the equipment and not developing the port as was agreed, which resulted in loss of performance. Instead of attracting new shipping lines, the port lost the most important shipping line, which represented 98% of container movements.

What’s next after DP World’s departure?

The Yemeni government said that it incurred minimal losses to end the management agreement with DP World. Five months after DP World’s departure, local debates are still raging about the port’s fate, after offers by Chinese companies to operate it. In Yemen, Chinese companies are trusted and have a good reputation with the public. But local newspapers revealed that Qatari, US and British companies, through the centers of power and influential Yemeni political parties, are actively seeking to take over Aden port in hidden partnerships with political forces in Sanaa. Anyway, Aden port is dormant and has not been effectively used after DP World left.

Corruption is not the only enemy of ports in Yemen — so is piracy. The increased movement of pirates at sea and the rising hijacking incidents of oil tankers have hurt the port’s reputation and Yemen’s maritime borders over the past years.

Yemen’s Red Sea ports, most notably Hodeidah and Mokha, have not been subject to Aden’s destruction and local and regional corruption. Hodeidah benefited from the unrest in Aden since the outbreak of the Southern Movement in 2007 and from the northern traders, who shipped their goods through Hodeidah, through which 70% of imports to Yemen passed. But Hodeidah is not appropriate to be used as a transit port like Aden.

On the other hand, Mokha — historically known as the port for coffee coming from Yemen — continued to be a major smuggling hub. If smuggled weapons, drugs and all kinds of goods do not pass through Mokha, then they enter through its broad and poorly monitored surroundings. Mokha also provides the west coast of the Red Sea with state-subsidized Yemeni fuel. It is sold abroad at world prices by extensive local and international smuggling networks.

Given the corruption, piracy and security problems, Yemeni ports are living through their worst days, after they used to be a source of money and a means to travel to distant ports.