A series of recent pollution incidents in the port of Aden has brought newfound urgency to addressing the hazardous vessels. 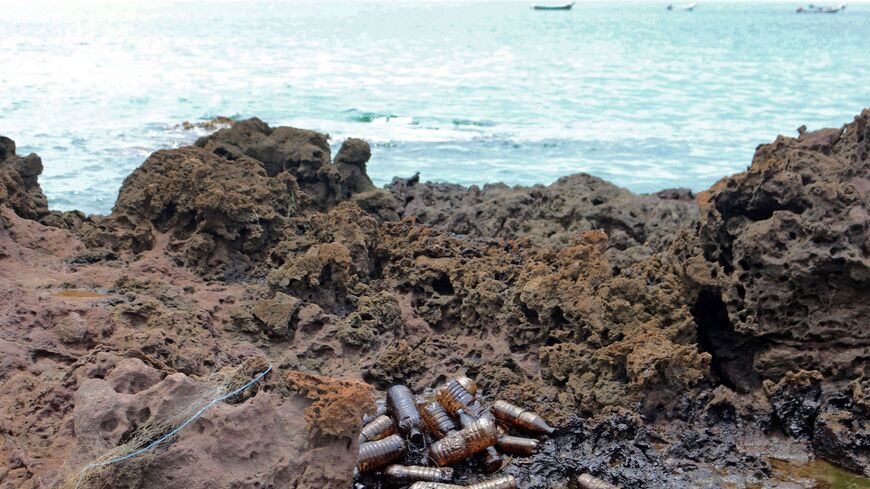 An oil-contaminated beach is pictured after a tanker sank off the coast of Yemen's southern port city of Aden on July 21, 2021. - SALEH OBAIDI/AFP via Getty Images

Since 2013, tanker ships linked to one of Yemen’s most powerful businessmen have been leaking oil and waste off the country's southern coast, threatening fishermen's livelihoods, putting residents’ health at risk and poisoning the environment.

A series of recent pollution incidents in the port of Aden has brought newfound urgency to neutralizing the hazardous vessels that are languishing near beaches frequented by locals.

A team from the Environmental Protection Agency (EPA), part of Yemen’s Aden-based government, visited the bay’s northern shore on July 7. They reported that an oily substance was visible on the sides of boats, on anchors and ropes, and in containers and plastic bags along a 1-kilometer-long stretch of beach.

A copy of the team’s report viewed by Al-Monitor whose authenticity was confirmed by a source in the EPA relayed local fishermen saying that “yesterday children who were out with their families were playing in shallow water polluted with oil.”

Fishermen told the team the pollution was caused by a tanker leak about four days prior, on July 3, one day after the Sichem Fenol-1 was spotted leaking by PAX.

It is an open question whether the Sichem Fenol-1 was the source of the environmental contamination detailed in the EPA report because there are over a dozen decommissioned vessels littering the Aden bay, some of which periodically spill toxic waste into the water.

The ships are so old and ill-maintained that bad weather can be enough to sink them, said Capt. Riyad Saeed Ba Jaman, general director of Ship Inspection and Registration in the governmental Maritime Affairs Authority.

“These transport vessels have a lot of holes in them under the water. Their thickness is nonexistent. Like a biscuit. If the winds are strong some days, the boat can turn, the underwater openings get larger and the water flow increases,” Ba Jaman told Al-Monitor.

On July 5, just three days after the Sichem Fenol-1 spill, a leak from the Pearl of Athena tanker caused a 14-kilometer-long oil slick to form in the bay, reported PAX using satellite imagery. By the following day, the pollution had coalesced into a 2.5-square-kilometer blob, and over the next several weeks the Pearl of Athena continued to discharge oil into the water. 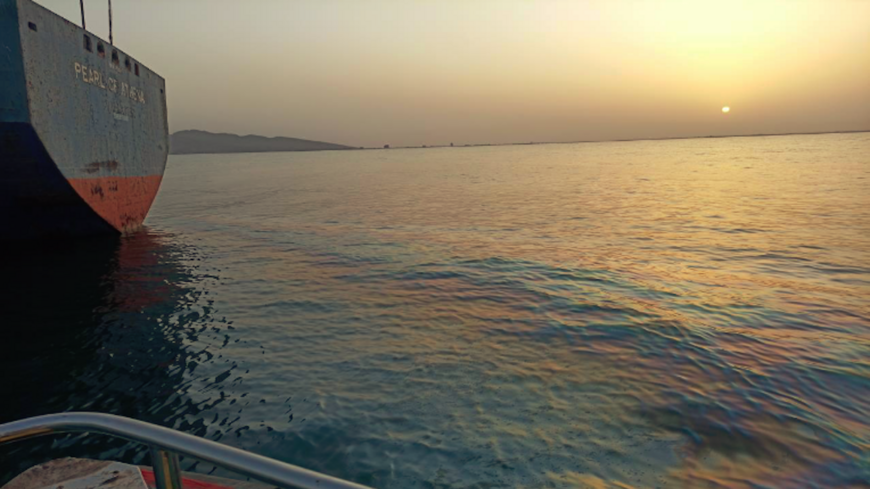 “The Athena partially sank as a result of the winds. It sat on its stern where the engine room is, and the remains of the bilge leaked out, as well as remaining fuel,” explained Ba Jaman.

A year before the Pearl of Athena incident, the tanker DIA-1 sank in the bay of Aden, having broken in two from below because of a botched towing operation, said Ba Jaman. Although it was empty of cargo, diesel that had accumulated in the walls and base of the ship’s storage tanks leaked out, he told Al-Monitor.

PAX reported that this incident caused a 20-kilometer-long oil spill, and small leaks can still occasionally be spotted coming from the DIA-1.

“The team saw fish stained with oil on the Barbariyya shore, and fishermen said their catch was polluted and their nets had been damaged and destroyed,” read a July 19, 2021, field report from the EPA on the DIA-1 incident.

“The team also saw children swimming at the al-Khisa beach, and when they left the water some oil was visible on their bodies,” the report continued. 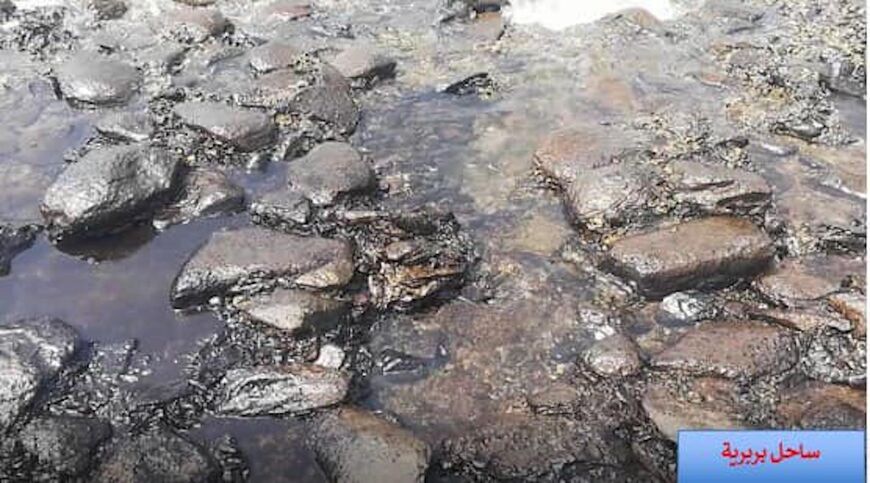 Only two decommissioned tankers off Aden’s coast are carrying cargo, said Ba Jaman: the Coral, home to an estimated 90 tons of oil, and the Sichen Phenol-1, the aforementioned leaky vessel that contains about 30 tons. “The [exact] quantity is unknown, but it’s not a small amount because they’re large ships,” he told Al-Monitor.

Bassam al-Qadi, a Yemeni journalist who has reported extensively on the dilapidated vessels, took a reporting trip to the Coral in late July. He confirmed the presence of oil in the ballast tank and a second larger tank, and he filmed debris littered across the ship’s surface and the aftermath of a fire.

“The Coral is the next disaster that awaits Aden, perhaps in the coming month or so,” Qadi told Al-Monitor.

Why have Aden’s port authorities not removed the failing vessels, most of which have been sitting idle for the better part of a decade?

To start with, the port's facilities have been damaged by fighting, equipment is in various stages of disrepair and “risk management [is not] a systematic part of normal decision-making processes, resulting in more ‘fire-fighting’ maintenance tactics,” read a 2020 UN assessment. A well-placed UN source in Yemen speaking not for attribution said the only vessel capable of dealing with oil spills is currently under repair.

Then there is Ahmed al-Essi’s role in the tanker affair. The Yemeni oil tycoon’s Overseas Shipping and Stevedoring Company is the registered “agent” of 12 of the 13 dilapidated ships sitting in the Aden port, according to data from the Yemen Gulf of Aden Ports Corporation.

Following the DIA-1 incident in July 2021, the government’s transport minister directed relevant authorities to “summon the maritime agent of the Overseas company that owns the ship in order to accept responsibility for fixing the problem and associated damage.” The minister also called for “taking necessary and quick steps regarding the boats belonging to the Overseas company anchored in the Aden port because of their lack of technical fitness and the expiration of their permissions.”

Instead, Overseas denied there was a spill from the DIA-1 at all. And Overseas’ other vessels remained in the bay, including the Pearl of Athena and Sichem Fenol-1, both of which spilled oily waste into the ocean last month.

Essi’s history with leaky tankers stretches back at least until 2013, when his Champion-1 vessel ran aground off the coast of Mukalla 480 kilometers east of Aden, sending an estimated 1,000 tons of oil into the sea.

Since that time, the Champion has continued to discharge small amounts of oil every fall, and it contains an unknown quantity today, with one local maritime official estimating between 1,000 and 1,500 tons, Qadi recently reported.

As with the decommissioned vessels in Aden, the potential for future disaster in Mukalla is magnified by the Champion’s decayed, partially sunk state, and its proximity to a beach frequented by locals.

“All of the ships that belong to Essi’s company are dilapidated, including those that [continue to] supply the ports with oil,” said Mohammad al-Hakimi, head of the Sanaa-based Yemeni environmental nongovernmental organization Holm Akhdar, which has covered the south Yemen tanker spills for a decade.

“The Al-Essi company also has a contract to supply Socotra island, and once we saw one of the company’s ships run aground in the Socotra port,” said Hakimi. Socotra is a UNESCO world heritage site and is home to various unique species, including the dragon blood tree.

Essi’s relationship with Yemen’s former president, Abd Rabbo Mansour Hadi, has afforded him “strange and miraculous protection every time there is an oil spill,” Hakimi told Al-Monitor. Essi was the deputy director of the former Yemeni president’s office and bankrolled Hadi’s government over the years. In one 2016 incident, he reportedly bailed Hadi out when the former president lost Saudi funding.

Absent any initiative by Essi to remove his ghost ships from the Aden bay, the UN is trying to strengthen the port’s ability to mitigate future spills.

“UNDP is working with the Ministry of Transport in Aden to undertake a study on how to remove the shipwrecks and other decaying vessels safely from the area. The study is an important step to address this long-standing danger,” Russell Geekie, senior communications adviser to the UN Resident and Humanitarian Coordinator for Yemen, wrote in emailed comments to Al-Monitor.

As for closing the funding gap to address the much larger environmental danger posed by the FSO Safer, the ticking time bomb tanker off Yemen's western coast that could spill a million barrels of oil into the ocean at any moment, Geekie sounded an optimistic yet urgent note.

“The UN has raised $63 million for the operation so far, including more than $140,000 through the public social media campaign, which we intend to relaunch later this month … additional member states have shown interest in pledging funds and we are confident that the plan will be fully funded,” he said. “However, the FSO Safer continues to decay and could break up or explode at any time."