Yemen hit with plague of commissions

Yemeni politicians are fond of forming commissions as a means to dealing with problems, but those commissions rarely produce any results. 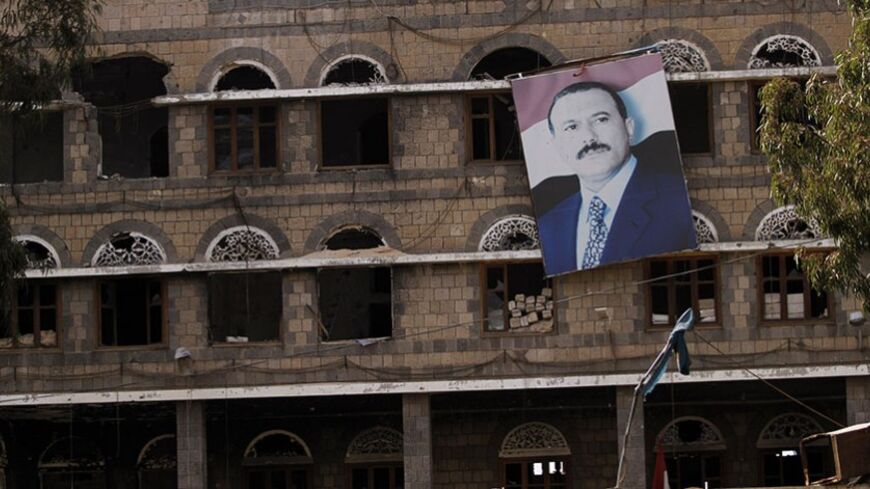 A picture of former Yemeni President Ali Abdullah Saleh hangs on a building of the Standing Committee of the General People's Congress, Saleh's party, in Sanaa, Dec. 17, 2013. - REUTERS/Mohamed al-Sayaghi

One of Yemen’s worst and most common political habits is forming commissions. As soon as some issue or problem emerges, the president or prime minister rushes to form commissions. “Inquiry commissions” have turned into a kind of a phobia for Yemeni citizens, who fear that the problem or issue will be diluted by forming a commission to absorb the street’s anger until the problem gets forgotten, or, more precisely, until a bigger problem happens and overshadows the old one. Then a new commission is formed for the new problem, and so forth.

Also, even when the matter is not about dealing with a disaster but about making a decision about the future, whenever decision-makers wish avoid confronting something or solving some problem, they resort to a commission to do their job.

In less than two weeks, Yemen’s most important and influential commission ended its work and declared dividing the country into six federal regions. The commission completed its work in determining the number of regions of the country, their type, and based on non-developmental, non-water, non-geographic, and non-cultural criteria. The commission was formed because the National Dialogue Conference failed to determine the number and type of provinces, and after the conference gave the president a mandate to form the commission in a non-democratic manner.

However, other commissions with limited tasks — such as investigating the assassination of a certain figure or a terrorist attack that left dozens of victims dead — never seem to end their work, and when they do end their work, the results remain secret, or fail completely to reach the goal for which they were formed.

As a tradition perhaps, and as a Yemeni exception, the president or prime minister forms inquiry commissions for issues that are supposed to be core functions of official security agencies. Those commissions are often political, not technical, and they don’t specialize in the matter they are entrusted to work on. It is usually difficult to find a rationale for forming these commissions, especially in light of the continued influence of the various political parties on the work of state organs, which lose their ability to function normally when penetrated.

Many years ago, then President Ali Abdullah Saleh formed an inquiry commission to look into the issue of land grabs in the southern provinces by influential military, tribal and government officials. Many waited for the results of the commission’s work in the belief that Saleh was serious in addressing that very sensitive issue, which was a main factor behind the emergence and escalation of the issue of the South. But when the Bara-Hilal Commission submitted its report to the president, the file was frozen and no action was taken. At the time, the commission’s work was revealed: It identified the names of influential figures behind the land grabs in the south. Saleh was given a choice between either holding those figures legally responsible or risking losing the South and Yemeni unity.

He chose to protect his influential allies on the list and took no action to implement the commission’s recommendation of returning the stolen southern lands to their rightful owners.

Under President Abed Rabbo Mansour Hadi, the number of commissions swelled because the issues and security incidents grew in an unprecedented way and they became very frequent in the news.

In early December 2013, al-Qaeda in the Arabian Peninsula attacked the Defense Complex Hospital in the heart of the capital, Sanaa, inside the complex where the Defense Ministry was located. Besides the enormity of the operation, which killed and injured hundreds of Yemenis and foreigners working in the hospital, that al-Qaeda was able to penetrate the heart of this military area was shocking.

Rather than reprimanding any of the military commanders or taking any other action, the president formed a commission to investigate the incident, demanding results within 24 hours. Forming that commission dismayed the public because of their long experience with useless inquiry commissions. When the commission completed its work, the public’s low expectations turned out to have been justified.

Although the committee submitted its report by the deadline, the report merely described how the attack happened and the nature of the losses without identifying the perpetrators. No newspaper editor would accept such an incident report from his subordinate. But the commission didn’t hesitate submitting it as an important military report on a sensitive and painful incident. To this day, the commission has not announced any other results or new conclusions. Parts of the commission’s report were published in some newspapers, news sites and social media.

Until now, the commission hasn’t announced that it completed its tasks nor has there been an announcement dissolving the commission or ending its work. It’s the same situation with dozens of previous commissions. The situation hasn’t changed, even after al-Qaeda claimed responsibility for the attack and released videos of it on the internet, in which al-Qaeda said that the operation was revenge for the killing of its deputy leader Said al-Shihri and justified the operation because a control and command center that coordinates with American drones was present in the complex.

Usually, these commissions do not fade nor do they get eliminated. It is as if their work has no time limit and their functions are due to certain desires, rather than having clear goals that the commission must either achieve or declare that it failed to achieve them.

The commission charged with investigating the case of the attack on the Central Prison in Sanaa weeks ago [on Feb. 13], in which 29 prisoners were smuggled out, has reached the same situation. Some officers were arrested in the incident on charges of involvement and coordination with the perpetrators, but the committee has so far not announced the results of its investigation and no one is following up on its results.

Last year, in the Hadramout province, the leadership of the First Military Region was attacked and its building was occupied for hours. A number of officers and soldiers were killed.

In Shabwa, there was a violent attack on dozens of army elements in January of this year, but the “genius” commission didn’t name the perpetrators. As usual, the commission collected published information that the public already knew and didn’t officially announce its results.

Regarding the shell tank that was fired from the headquarters of [a military] brigade at a funeral tent in Dali on Dec. 27, 2013, and in which dozens of civilians were killed or wounded, the committee formed to investigate the incident neither denied nor confirmed the charge against the brigade commander, despite the increasing calls for his resignation and his trial. The commission didn’t announce any further actions resulting from the crime committed by a government employee on unarmed civilians, an incident that shook north and south Yemen.

An important issue was that of the stolen lands in the southern provinces. Hadi formed a commission to address that issue (without clear authority) after a study was made regarding the submitted complaints. He formed that commission on recommendations by the National Dialogue Conference and the 20 points intended to show good intentions in addressing issue of the South.

Several months passed on the commission’s formation, and in late February of this year, the commission announced that it had received 100,000 files about the stolen lands. If the commission received that many files in about a year, how many years would it need to objectively study all those complaints, listen to the other parties’ versions, and reach genuine solutions to an issue of this magnitude?

Major issues, such as the stolen lands issue, need dozens of expert commissions. The commission designated to deal with the issue of those who have been fired from their jobs in the southern provinces has worked to restore hundreds of them to their jobs. But thousands are still waiting for similar solutions, and the commission hasn’t addressed all the cases yet.

Based on the bad experiences with commissions investigating exceptional problems from outside the competent organs and by persons who lack the experience to deal with such exceptional and urgent issues, Yemeni citizens have come to believe that the shortest way to kill an important issue is to form a commission to “address” it.

Yemenis face many everyday and complex problems, among them are inquiry commissions.