Yemen has witnessed a recent increase in assassinations, including some carried out by terrorist groups and others with political motivations. 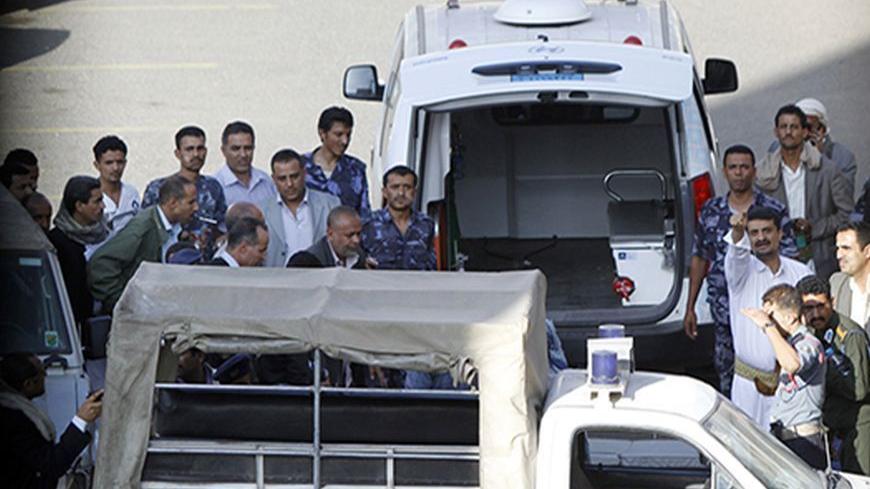 Policemen and ambulance personnel gather outside a supermarket after a shooting in Sanaa, Oct. 6, 2013. - REUTERS/Mohamed al-Sayaghi

On Oct. 12, 15,000 members of the presidential guard, special security and intelligence forces spread throughout the capital city of Sanaa to secure the road taken by President Abed Rabbo Mansour Hadi, as he went to attend the graduation of military officers about 1 kilometer (0.6 mile) from the presidential palace. According to the local Al-Shareh newspaper, Hadi fears being targeted for assassination, particularly after security forces thwarted an attempt against his life a month ago.

In Yemen, it is not only the president who fears assassination. The specter of death no longer hovers above the heads of prominent leaders or security figures alone but also unprecedentedly haunts second-row security and military officers as well as civilians. This comes after many second-row officers died in individually targeted assassinations that took the lives of more than 100 officers in the last two years.

It has become customary to hear almost daily news about the assassination of a security or military officer in Yemen at the hands of gunmen aboard motorcycles. It has reached the point where these have been dubbed “cycles of death.” The phenomenon of motorcycle killers and US drones have become terrifying aspects of Yemeni life, despite the fact that their targets and means greatly differ.

The assassination of the head of the Second Military Command, Maj. Gen. Salem Qoton, in July 2012 was one of the most devastating attacks, as it killed the man who had succeeded in defeating al-Qaeda in Abyan. While it was clear that al-Qaeda was responsible for Qoton’s assassination, the attempt was one of the few prominent attacks that carried with it obvious security motives.

On Oct. 6, an employee at the German Embassy was also assassinated in the heart of Sanaa, one day after the “political isolation” clause — which aims to exclude former President Ali Abdullah Saleh from his party’s presidency — was discussed during the national dialogue session.

Assassination attempts in Yemen are no longer traditional security operations driven by security motives. In September 2012, the managing director of Al-Thawra Hospital in Sanaa was assassinated; this was followed — on the same date in 2013 — by the killing of his successor, who was found murdered in a similar fashion inside the same office, without a motive or suspects ever being traced.

More than a month ago, a senior officer of the finance department of the armed forces was also assassinated in an attack that fell outside the traditional modus operandi of al-Qaeda, which usually only targets military commanders who play direct roles in confronting it. And, months prior, Yemeni lawyer Hassan al-Dawla, who represented the victims of the al-Karama massacre of March 2011, was also killed. His murder was part of an operation whose true perpetrators were never identified, as political factions — Saleh and Ali Mohsen al-Ahmar — accused each other of standing behind the murder.

That is not the only aberration surrounding the security assassinations that have plagued Yemen lately. The fact that none of the traditional military figures — around whom the Yemeni army splintered in 2011 — were targeted for assassination, despite their high-ranking positions in the army, has raised many questions about the real beneficiary and faction responsible for the spate of assassinations. It is also hard to believe that any of these military figures are effectively confronting al-Qaeda. With the exception of Hadi, who alone is confronting al-Qaeda through the army's military units that he controls, no other military units are waging direct operations against al-Qaeda. Such a confrontation is not on top of the list of priorities of the commanders of these units.

Whatever the case, it has become evident that assassination attempts in Yemen increase during the pivotal stages of the country’s political transition process. In other words, they no longer are terrorist operations, but have become political acts that benefit the factions negatively affected by the ongoing political transformation process. Some of them are also functional in nature and used by the criminals to mislead justice. On June 1, Brig. Gen. Yehia al-Omeisy, head of the air force police, was assassinated in the city of Seiyun by gunmen on a motorcycle. Afterward, Criminal Investigative Unit Director Col. Abdul Rahman Bashkil was also killed as he investigated Omeisy’s murder. The same pattern was followed in Sanaa with Gen. al-Ashol, the security officer leading the investigation into the terrorist blast that killed and wounded hundreds of central security officers as they trained for a military parade commemorating Unification Day in May 2012.

Despite the mystery surrounding these acts, their focus on political security officers (Yemeni Intelligence) and air force officers points to an intention to get rid of high-ranking figures who possess a great deal of information about the terrorists — as individuals and factions — and pose an imminent danger to those terrorists.

The attacks on Yemeni air force officers, on the other hand, indicate that unknown factions are intent on weakening the most powerful and competent of governmental military forces. The Yemeni air force is the only military force possessing qualitative armaments that other traditional Yemeni factions lack, and is the only military force capable of swaying the battle in the state’s favor, due to the fact that other Yemeni factions possess all types of weapons except airplanes.

The so-called Yemeni Spring of 2011 saw sharp divisions inside the military establishment between proponents of Saleh’s regime and supporters of his opponents. This development was maybe the most dangerous to the country’s security. Despite the redeployment of army units and ouster of former high commanders, acts of vengeance and conflict between different military institutions with diverging loyalties did not stop. The ongoing assassination attempts that cannot be easily attributable to al-Qaeda are blamed by some on the continuing clashes between politicians and their supporters among the army’s commanders. They are also attributed to the politicians’ use of the armed forces as fodder to attain their goals and conduct their feuds or, at least, collude with the terrorists in conducting their attacks.

As the end of the National Dialogue sessions draws near, and the political parties bicker about the principles around which a state can be formed and solutions reached to the issue of the South, assassination attempts increased. Meanwhile, security agencies have yet to announce the results of investigations into any of the assassination attempts.

Furthermore, the high number of southern victims of these operations raises fears that attempts at finding political solutions will fail, and the South will insist on seceding from the North under the pressure of these dangers that target its inhabitants. This is reminiscent of the events that transpired during the 1990s, when more than 151 politicians were assassinated, most of them leaders of the Yemeni Socialist Party, which represented the South in the unity government. Events that exacerbated the crisis between the partners in the unity government led to a four-month war in the summer of 1994.

The repercussions of that war form the most important features of the current crisis, and the continuation of assassination attempts might lead to confrontations that would revert Yemen to the cycle of bloodshed. This is unless more rigorous action is taken to prevent the spread of arms and more effectively monitor the death squads.

The ongoing bombings and assassinations in Yemen lead to a situation that resembles the one endured by Lebanon following the departure of Syrian forces from that country in 2005. At that time, the security situation deteriorated and the difference between proponents and opponents of security became negligible.