US-Russia confrontation could drift to Mideast

The question is whether Iran, Egypt, or Saudi Arabia, in particular, will change their policies in the context of the US-Russia standoff. 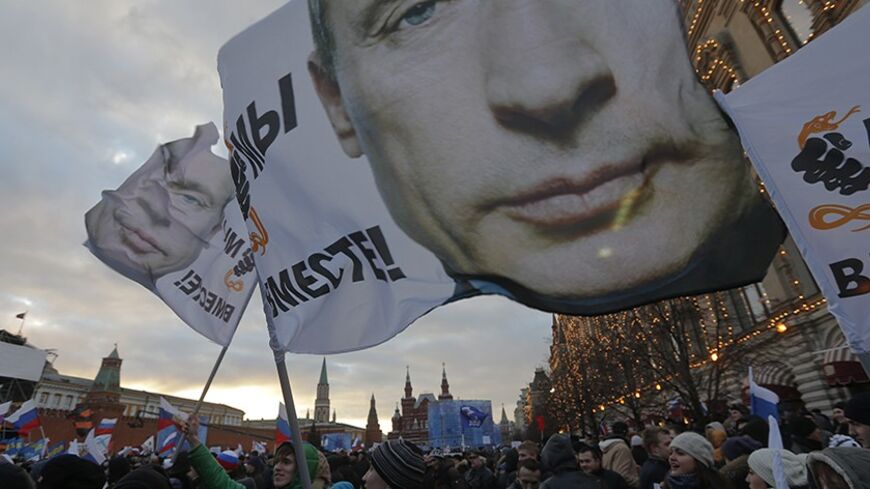 People attend a rally called "We are together" to support the annexation of Ukraine's Crimea to Russia in Red Square in central Moscow, March 18, 2014. - REUTERS/Maxim Shemetov

As Russia moves steadily toward annexing Crimea — and the United States and Western countries respond with sanctions and other steps — the risk of an extended global confrontation is growing. Although any confrontation between the West and Russia would likely differ significantly from the Cold War because of today’s massive economic imbalance between the two sides, it may also look like the Cold War in some respects. Among these may be a struggle for influence in the Middle East with unpredictable results.

With 1.3% economic growth last year — without a major geopolitical crisis or Western sanctions — Russia’s financial resources will be strained and its options limited. Still, the Central Bank has nearly half a trillion dollars in reserves, which could help Moscow to manage an economic slump for some time, possibly two or three years at current energy price levels (oil and gas revenues make up about 50% of Russia’s federal budget revenue, with oil providing the vast majority of this).

If Western-Russian tensions escalate, the Russian government’s immediate priorities will be to inject state funding into the economy in order to sustain political support and to find additional revenue. The new money will be especially important; a Russian newspaper’s analysis puts the costs of annexing Crimea at $20 billion over the next three years.

At the same time, Russia’s officials are sufficiently pragmatic to know that they cannot prevail in a tit-for-tat exchange of economic sanctions with the United States and the EU — Russia’s economy is one-eighth the size of the US economy alone. This will encourage Moscow to look for asymmetrical instruments of pressure on America and Europe. More challenging for Russia would be stitching together these tactical efforts into a coherent strategy that leads to greater regional influence.

The Middle East offers many opportunities for Putin to combine business with pleasure in challenging the United States. Consider its tumultuous strategic environment: a civil war in Syria, a potential civil war in Libya, ongoing political instability in Egypt and Iraq, simmering violence in Yemen, and political uncertainty almost everywhere else. Saudi Arabia and Qatar are deeply engaged in Syria’s war, as are Iran and Hezbollah. Saudi Arabia and Egypt (among others) are frustrated with the United States — the former over Syria and the latter over America’s intervention in its complex politics, where Washington seems to have been on almost every side at one point or another and has consequently alienated almost all sides. Uncertainty about Iran’s intentions further complicates all of this, as does a weakened relationship between the United States and Israel (where Foreign Minister Avigdor Lieberman appears to be one of Putin’s closer personal contacts among foreign officials). Meanwhile, China has surpassed the United States as the largest buyer of Middle East oil even as broader China-Middle East trade soars. Expanded Russian arms sales — or new Russian nuclear power plants — may only further destabilize the region.

In addition to Syria, Moscow is likely to concentrate on Saudi Arabia, Egypt and Iran. Saudi Arabia and Syria are Russia’s principal security concerns in the Middle East; Moscow’s pre-eminent security interest is in minimizing its own domestic terrorism problem, which means supporting a strong Syrian government that can crack down on extremists and discouraging Saudi and other financial support, whether official or otherwise, for al-Qaeda-connected opposition groups in Syria and extremists in the former Soviet Union. Russia has long viewed Saudi Arabia and Qatar as key sources of support for Chechen militia groups and two Russian operatives were convicted in Qatar in 2004 for assassinating former Chechen leader Zelimkhan Yandarbiev to cut short his fund-raising activity there. Indeed, leaked reports purported to summarize a six-hour summer 2013 meeting between Putin and Saudi intelligence chief Prince Bandar bin Sultan suggest a tense discussion of Syria and terrorism in Russia. Riyadh’s recently diminished support for al-Qaeda-linked groups in Syria may facilitate better relations with Russia (and many others). Saudi officials have also referred to negotiating a nuclear cooperation agreement with Russia, though little progress is evident.

Egypt’s importance has more to do with its place as one of the region’s most populous nations and largest economies, as well as its status as a top destination for Russian tourists, who make up the largest share of international tourists visiting the country. It is also symbolically significant as a former Soviet Cold War ally — essential context for a recently reported Egypt-Russia arms deal that may or may not be for real. Modern Russia is quite distinct from the Soviet Union in insisting that its clients pay their bills and it is far from clear that reported Saudi financing for the multibillion dollar contract will materialize. Nevertheless, leaders in both Moscow and Cairo seem motivated to engage in public flirtation with an uncertain destination — and in a February meeting, Putin endorsed Field Marshal Abdullah Fatah al-Sisi’s decision to run for president. The statement highlights Russia’s reluctance to criticize or second guess regional strongmen, which some might find an appealing contrast to the United States.

Since US military action against Iran seems to be off the table so long as negotiations appear ongoing, Russia’s principal stakes in Tehran are economic — as a general commercial partner and an arms supplier — and geopolitical. The Kremlin’s position as a veto-wielding permanent member of the United Nations Security Council, and its resulting place at the table in the P5+1 process, have been an enduring source of international visibility and influence only recently surpassed by Russia’s Syria role. Moscow also appreciates Iran’s restraint in the former Soviet region and, as a result, sees it as a valuable partner in managing Saudi Arabia. Fundamentally, however, some Russian officials have a conflicted attitude toward Iran, in that they welcome diplomacy as an alternative to US-led war or regime change, but are not especially eager for a US-Iran rapprochement that could undermine Tehran’s interest in their relationship.

The central question in assessing Saudi, Egyptian and Iranian foreign policy is whether any of them might truly make significant changes in its foreign policy orientation. Could Saudi Arabia or Egypt develop considerably closer ties to Russia or could Iran do the same with America? Experts on each of the three countries can likely provide a long list of reasons that such change is improbable, as experts on Russia could describe why Moscow can’t or won’t take particular steps. Chances are good that most will be proven right; inertia is as powerful in policy as it is in physics.

Unfortunately, however, they could also be proven wrong. The international system as a whole, and the Middle East in particular, now face levels of uncertainty not seen for quite some time. And because experts of all kinds are inherently experts on the past — not the future — they often fail to predict major dislocations. In times like these, leaders on all sides have a special responsibility to think twice before acting, for unlike the experts, their choices have consequences.