Despite all the authoritarian tactics employed to contain dissent, Turkish protesters are finding creative ways to stand up against the ruling party. 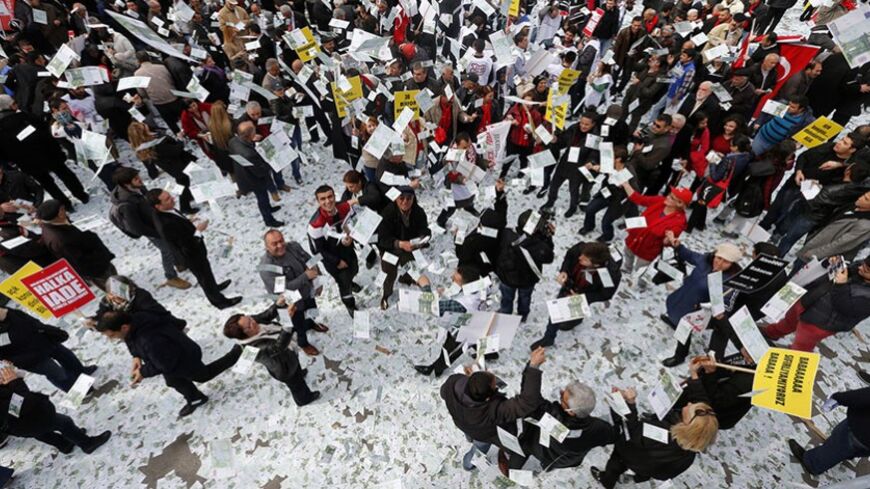 At a March 3 Justice and Development Party (AKP) rally in the Osmaniye province, a man in the crowd unfurled a banner reading, "Beware of the thief," or "Hirsiz var." The unemployed father of two was promptly removed from the scene and reportedly beaten by Prime Minister Recep Tayyip Erdogan's bodyguards. The goal of the protester — a former AKP supporter — was to meet Erdogan and ask him for a job in person. The man didn't meet Erdogan, and was instead threatened by the police not to file a complaint regarding his beating. All he had done was display a banner, yet this marks a turning point, as he happened to be the first to protest the AKP at a pro-AKP rally. It may be an omen for what is to come.

A lone man was photographed in Istanbul's Taksim Square, strolling the streets wearing a jacket with "Hirsiz var" handwritten on the back with a marker. Since the end of December 2013, "Hirsiz var" protests have erupted all over Turkey. Several individuals have been arrested for screaming "Hirsiz var." After one protester's release, he asked, "Is it a crime to a call a thief a thief?" Needless to say, most, if not all, of these protests have been met with strong police reactions in the form of water cannons, tear gas, pepper spray and plastic bullets.

Since the Gezi protests of June 2013, local municipalities have been fighting endlessly to clean anti-Erdogan graffiti off the walls. During opposition party rallies, "Hirsiz var" and other anti-Erdogan slogans are more frequently spotted. At multiple locations, AKP buses on electioneering missions have been tagged with the same slogan. Just Google “Hirsiz var” and click on images. Social media and “marginal” webpages are booming with images of "robbers.”

Both international and domestic media have been bombarded with cartoons of Erdogan, his family and friends "stealing" money and resources. On social media, your regular Turkish Joe comments, “This is where they took Islam in the eyes of the world.” In one cartoon, as a congregation prays with their foreheads to the ground, Erdogan walks away with a big sack of stolen goods. If you are a Turkish citizen, I assure your face turns red and your stomach churns while looking at these cartoons.

Erdogan and his colleagues — now all out of jail and cleared of “judiciary” scrutiny — now dare to ask the Turkish public to give the Turkish prime minister the "right to sin" as God has given all of his subjects. This must be rather difficult for pious Muslims to justify, as Erdogan himself has repeatedly explained what is a sin: consuming alcohol, allowing women and men to mingle and not having kids, to name a few. As one friend who wears hijab put it, “Maybe we are sinners, but we are not thieves of a nation’s income and honor.”

During the election campaign, songs of protest have blossomed. It must be noted that political songs in Turkish are not just satirical. Rather, it has been a tradition for over three decades to use “political party slogan songs.” During each election, parties adopt popular songs and re-word them with their own party messages. Political songs can smoothly permeate the hearts and minds of the people. The AKP realized the potential of election songs early on. Following in the footsteps of the Motherland Party (ANAP) — another mainstream conservative party, led by Turgut Ozal in the mid-80s — the AKP has used mobilizing songs. During Gezi protests, several singers sided with the AKP and dedicated popular folk tunes to Erdogan. In these songs, Erdogan is portrayed as the most respected figure, held accountable only to God.

These Twitter and YouTube accounts, which release alleged conversations of AKP officials and family members, first provide a written explanation of what we are about to hear from the recording. (No wonder Erdogan threatened to shut down YouTube and Facebook. As you read this explanatory screen, you also listen to a popular Turkish tune.

Most of the leaks are introduced by songs that have been adapted from well-known Turkish tunes to mock the latest corruption. Some of these tunes were bannedin recent history, yet they all remain dear in the resilient hearts of the people. The AKP has had its own war with songs, the latest being when one of the AKP’s founders, and minister, Bulent Arinc, asked a singer not to recite a song because it utters the word "raki.”

The Twitter account @HARAMZADELER333 ("haram" means forbidden and "haramzade" means those who approach the forbidden) has been the main outlet of several leaks. However, it is not the only one. Despite the Turkish government's endless attempts to block access to the recordings of Erdogan, his family and the AKP bureaucracy, new releases mushroom every day.  On the Internet, the AKP has learned it is fighting the windmills.

Along with the "Hirsiz var" slogan, there is a war of songs as well. The AKP has adopted a well-known song from Central Asia, titled “Dombra,” as its 2014 election song. The original composer of the song, who is from Kazakhstan, said he did not give the AKP permission to use his song and is not interested in selling them the rights.

In the meantime, the National Movement Party has reacted to the AKP’s attempt to take over this Turkic tune, and produced its own version of the song for the election. Social media users have been up in arms with comments like, “Even the election song of the AKP is stolen.” The beloved tune is also re-arranged as “Bascalan,” which means “head thief,” and its YouTube video states that the song is the "revenge" of the dissidents or protesters. The lyrics are rather harsh in its criticism of Erdogan and his administration.

The scary part for the AKP is that these are mostly folk songs, not the songs of “white Turks.” The songs being circulated in coffee shops brand Erdogan a liar and thief, and indeed traces all of the leaks. So, even if 80% of the AKP’s electoral base do not get their news from the Internet, and have not listened to the notorious tapes, these songs succinctly summarize all allegations. Alas, just like in any good tune, they carve it into the individual memory. The AKP’s own election videos have been edited by dissenters to demonstrate the party's failures and false promises. All praise for Erdogan has been turned into condemnation, even the praise of the "tall man" has been turned into a "man with long arms," signifying thief in Turkish.

Even if this doesn't make it to the mainstream media, people keep finding interesting ways to protest Erdogan, turning both the Gezi protests and the Dec. 17 corruption scandal into a "coup" to topple the prime minister, in the eyes of the AKP. Odd as it may be, Abdullatif Sener, a founding member of the AKP and former friend of Erdogan, has been quoted as saying he believes the recordings between Erdogan and his son to be original, and that Erdogan would do anything in his power to keep his political power intact, even if it means leading the country into a civil war. Given the mostly creative and non-violent means of protests employed by the Turks — despite all the police brutality and corruption — it is worrisome to see the shadow of the future looms with such high risks for the people.