Developments in the aftermath of mass anti-government protests in Turkey stoke misgivings over the future of Turkish democracy. 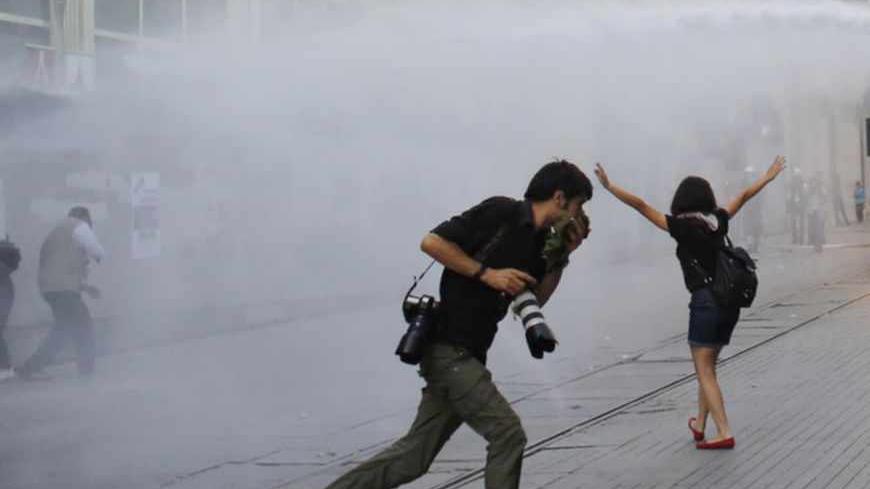 Riot police use a water cannon to disperse demonstrators during a protest in central Istanbul, July 6, 2013. - REUTERS/Murad Sezer

The protests that erupted in Istanbul’s Gezi Park in late May and then spread across the country marked a watershed in Turkish politics. The protests aimed to stop the cutting of trees at Gezi Park, but quickly grew into mass demonstrations against the government of the Justice and Development Party (AKP) and most particularly against Prime Minister Recep Tayyip Erdogan.

The protest wave had a number of unprecedented aspects:

1.     It was perhaps the first time in Turkish history that street demonstrations targeted a single individual — the prime minister — rather than the government or the state as institutions.

2.   Never before did such huge crowds take to the streets spontaneously, led by no trade unions, political parties or civic groups. Political parties and nongovernmental organizations eventually joined the demonstrations, but none is known to have “steered” the crowds or acted as a “driving force” at any stage of the events.

3.   In another first for Turkey, the Gezi protests brought together people of many different worldviews. Neo-nationalist and secularist Turks — the AKP’s arch-foes — may have dominated the streets in major cities, but the core group at the protest epicenter in Gezi Park was a strikingly diverse coalition. People of all faiths and political convictions were present there — Marxists, anarchists, LGBT activists, devout Muslims, conservatives, Alevis and non-Muslims.

A memorable photo of demonstrators fleeing the police stupefied anyone with the slightest idea of how sharply Turkey is polarized. The picture captured a young woman with a banner of Turkey’s founding father, Mustafa Kemal Ataturk, running hand in hand with a young man holding a banner of the Kurdish Peace and Democracy Party, while a middle-aged man standing nearby flashed the far right’s “Grey Wolves” sign at the police in defiance of the water cannons they fired at the running couple. For Turkey, it was an unbelievable image.

The government’s response was extremely tough, as many articles on Al-Monitor have detailed. The police were heavy-handed with vandals and peaceful protesters alike. Five people, among them a policeman, died and hundreds were injured, including a dozen who lost an eye after being hit by tear gas canisters. Thousands ended up in police custody. Judicial investigations are still underway into the events.

In response to the protest wave, Erdogan organized his own rallies and issued public warnings to business people and celebrities who backed the protests — often with a bullying tone. Tax inspectors raided companies of the Koc business group, seen as the chief supporter of the protests, while many pro-Gezi journalists lost their jobs.

Ever since the unrest broke, Erdogan has been blasting the Gezi protesters in almost every speech he makes. Ministers warned fans against chanting slogans at stadiums. Similarly, AKP officials have vowed no tolerance for any follow-up protests that students may start once universities begin to reopen in September.

A number of factors will determine how much the Gezi protests will affect the future of Turkish democracy.

The first major factor will be how legal cases involving the protests turn out. Will policemen and their superiors receive the punishments they deserve for using violence, abusing power and battering, wounding and even killing protesters? Or will they enjoy impunity? Another crucial judicial aspect is the prospective trials of protesters. Will the trials be limited only to those who resorted to violence and openly incited violence? Or will the judiciary initiate large-scale cases extending to pro-Gezi intellectuals and celebrities, while heeding ambiguous and unsubstantiated government allegations such as the “interest rate lobby” and resorting to Turkey’s already notorious anti-terror laws? The questions are yet to be answered.

Second, it will be important to see what climate will prevail in the already troubled realm of freedom of expression. An ominous incident occurred on Aug. 31 in Didim, a town on Turkey’s Aegean coast.

The Didim Gezi Platform, which brings together various civic groups, organized an outdoor cartoon exhibition about the “Gezi Park Resistance” that featured the work of both Turkish and foreign cartoonists. The local AKP branch, however, lodged a legal complaint over the exhibition, and the police, armed with a prosecutor’s order, confiscated all cartoons. An investigation was launched into the organizers on the grounds they “insulted senior statesmen” — some cartoons had depicted Erdogan.

Cartoonist Mehmet Golebatmaz, one of the organizers police questioned, said he had been a harsh critic of past military coups. He  sounded the alarm over freedom of expression in today’s Turkey. “Never had I been questioned and probed [over a cartoon] — not even during times of military rule,” he said. Another organizer, Erdogan Karayel, was even tougher: “Our country today is being governed by a mindset that has difficulty in accepting cartooning as an art of humor and satire. … What is more, the exhibition was an international event. On behalf of my country, I apologize to all foreign cartoonists for what happened today.”

It is unclear yet whether the cartoonists will be formally charged and put on trial. It would be premature to conclude that what happened in this small town was the precursor of a nationwide crackdown. Yet, one can hardly argue the incident had nothing to do with the rhetoric of government officials.
The course Turkish democracy will take in the wake of the Gezi protests remains unclear. The initial signs, however, offer no reason to cheer up.

Orhan Kemal Cengiz is a Turkish lawyer, journalist and human rights activist. A former president of the Human Rights Agenda Association, a respected Turkish NGO that works on human rights issues, since 2002 he has been the lawyer of the Alliance of Turkish Protestant Churches. He writes for Today’s Zaman and Radikal.