Justice and Development Party members, who control the majority in parliament, reject the opposition's request to have the indictments be read out in full. 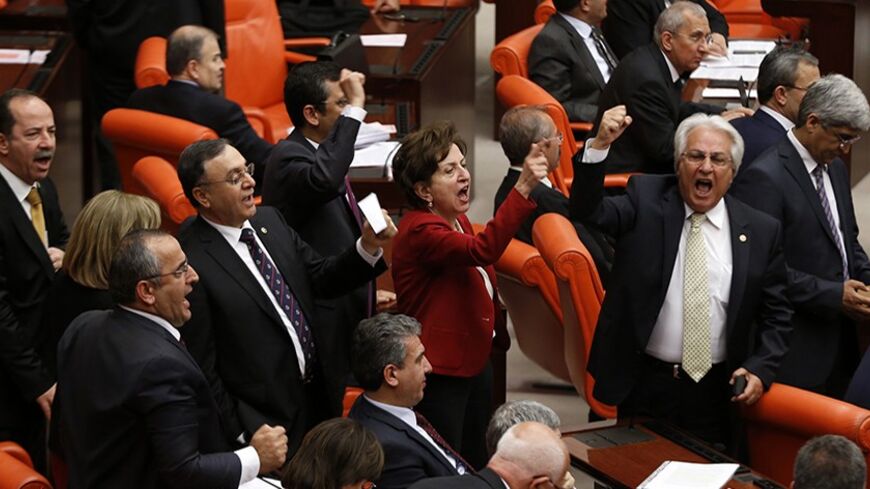 The ruling Justice and Development Party (AKP), which has a majority in the Turkish parliament, on March 19 rejected the opposition’s request to discuss the details of the indictments targeting four former cabinet ministers in a corruption case. The hours-long extraordinary session of parliament, which could have opened the way for the four to stand trial, instead ended with an acknowledgment of the AKP’s request to form an investigative commission into the allegations at a time to be determined later.

Justice Minister Bekir Bozdag accused the opposition of having ulterior motives: “This debate started on Dec. 17. It has been three months since then. Why haven’t you asked for any inquiry until now?” Bozdag asked. “You did not need an indictment to open this issue to discussion in parliament. The news reports were enough. But you are using this issue to score points in the upcoming March 30 election.”

Akif Hamzacebi, parliamentary group chairman for the main opposition Republican People’s Party (CHP), objected. “This is not a simple issue. The magnitude of the alleged corruption is huge. We are not in the habit of proposing investigations into issues based on news reports. Due to our respect for parliament, we waited for the indictments,” Hamzacebi said. “And that is why we demand that these indictments be read in full here in parliament so that each member can decide freely how to proceed with these serious allegations.”

Hasip Kaplan, the parliamentary group chairman for the pro-Kurdish Peace and Democracy Party (BDP), agreed. “There is no parliamentary regulation or a legal code that prevents us from reading these indictments in full here. And even if there is, our morality and conscience should make us choose transparency here,” Kaplan said. “Also, there are numerous examples in the past where indictments about us were read in full here, and there was no issue about it then. Is there a double standard?”

Nurettin Canikli, the parliamentary group chairman for the AKP, argued fiercely that reading the indictments in full would violate the rule of law. “Everyone knows what is in these indictments; whether it is legal or illegal is a different issue though,” Canikli said. “The reason why we won’t allow this here today is simple. The judicial investigation is in progress. We should not intervene in the judicial process.”

Oktay Vural, the parliamentary group chairman for the Nationalist Movement Party (MHP), disagreed. “We assembled here to discuss the content of these indictments, and by withholding information from us — the elected members of this nation — this parliament is actually staging a coup against people’s will.” Hamzacebi said, “The whole point of us gathering here today is to be informed of these indictments. We don’t want to read it in newspaper articles and be informed. We want to have access to these indictments and make our decision about these charges based on these facts.”

For hours, the debate went more or less along the same lines to no avail. The AKP members defeated the opposition's request. The indictments were neither read in full, nor was there a decision made to form an investigative commission to look further into the issue. The AKP did say that the ministers were seeking the formation of an investigative commission to examine the issue. The opposition interpreted this to be just a political tactic to persuade people eager to believe in the AKP that the party's members were acting with goodwill and doing their best to uncover the truth. “If they were so willing to find out the truth, they would have given us access to these indictments, and accepted the formation of the investigative commission today,” Hamzacebi said.

In sum, the AKP government has managed to sideline the extraordinary session to achieve its goal. It is, however, obvious that until the scheduled general election in Turkey due in the summer of 2015, this issue will keep the ruling party on the defensive.