Turkey also a loser in Crimea

No matter how hard Turkey tries to be the guardian of Crimean Tatars, there isn’t much it can do after the Crimean vote to join Russia. 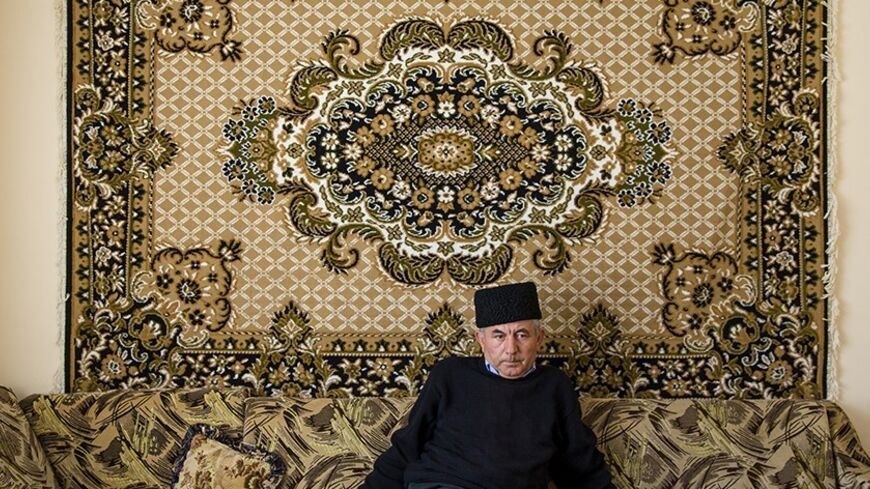 Mustafa Asaba, a regional leader of Crimean Tatars, sits in the living room of a friend's home in Belogorsk near the Crimean capital of Simferopol, March 17, 2014. - REUTERS/Thomas Peter

Who lost in Crimea? If there is a country to be added to Ukraine, it's Turkey.

The referendum decision of Crimea to return to the Russian fold, after Turkey lost it to the Russian Empire with the 1774 Treaty of Kucuk Kaynarcam, has spoiled Turkey’s strategic ambitions for the region. What kind of ambitions? Nothing to do with recovering Crimea geographically, but to bring back to life cultural and historical heritage of the Crimean Tatar Khanate.

Even the burial of writer Cengiz Dagci, who died in London in 2011, back home in Crimea was a mission of strategic significance for Turkey. The Cooperation and Coordination Agency of Turkey (TIKA), by restoring the historic relics of Zincirli Madrassa and Haci Gray Inn and by renovating Kirim Tatar National School, tried to make the legacy of the Muslim Tatars more visible. In an action plan Foreign Minister Ahmet Davutoglu had prepared in 2002 while he was the chief adviser to the prime minister, Ukraine was among the countries to develop strategic relations with, alongside South Korea, Brazil and South Africa. Ankara tried to develop its ties to Crimea with the consent of Ukrainians. This policy did not change during the reign of the toppled leader Viktor Yanukovich.

Since the collapse of the USSR, Turkey has preferred to see the future of Crimean Tatars within the territorial integrity of Ukraine. When in 2008 Russian leader Vladimir V. Putin declared that unilateral recognition of Kosovo without a UN decision would set a precedent, it was not hard to predict that this was a Slavic vow of revenge. The turf for this revenge was inevitably to be the historical friction points between the Russians and the Turks. After the United States declared its recognition of Kosovo, the first diplomat to submit his letter of accreditation to the prime minister of Kosovo was the representative of Turkey. How do you think Putin considers Turkey’s objections to his decisions about Crimea?

So what can Turkey do more than its US and EU allies against the secession of Ukraine? Can Ankara decide on sanctions like the United States and EU? Davutoglu, as the first foreign minister to go to Kiev immediately after the crisis broke out, had meetings with Mustafa Abduljamil, the leader of Crimean Tatar National Movement and the new Ukrainian government. In addition to moves on international platforms, Prime Minister Recep Tayyip Erdogan spoke with Putin and Davutoglu spoke with Russian Foreign Minister Sergey Lavrov to emphasize the need to find a solution to the crisis within the territorial integrity of Ukraine. But these efforts did not change the course of events. Abduljamil, the former speaker of the Crimean Tatar National Assembly, the civil society organization of the Tatars, met with Erdogan in Izmir on March 16 and with Davutoglu in Ankara on March 17. Davutoglu said the results of the referendum will not be accepted, that Ankara will continue to support the Crimean Tatars, and Turkey’s position on seeking a diplomatic solution stands.

Despite the resolute position expressed in our statements, the general impression is this: Turkey is not in a position to reverse the process of Crimea joining Russia. It is not even in a position to adopt sanctions similar to those taken by the United States and EU. That is why even if Turkey talks of initiatives in the UN, NATO and OESC it has no option but to live with the situation. A diplomatic source asked by Al-Monitor, “What options does Turkey have? Does it have a road map?” responded: “We want a solution through diplomatic means but it is not realistic to talk of a road map. Turkey has adopted a course many other countries have chosen.” Asked if Turkey could resort to sanctions like the United States and EU, the source said; “We don’t know what sanctions are on the table at the moment. We can’t forecast what will happen in the long run. The government has to make an assessment.”

Actually, it might be more realistic to talk of a reaction that has been reduced to “diplomatic activity” that has no deterrent effects and that won’t influence the outcome.

Because of dearth of options, the focus has shifted from blocking the Russian designs for Crimea to protection of Tatars of Crimea. Russia, aware of the question of legitimacy that would arise unless there is the consent of Tatars, offered them guarantees far beyond Turkey’s expectations. Putin told Abduljamil, invited to Moscow, that he had issued directives for the protection of Tatars.

Moreover, Russia prepared a package that encourages the Crimean Tatars to return to their homeland and assuring their participation in governing it. Turkey’s priority is the return to their homeland of the Crimean Tatars exiled to Central Asia in 1944. Davutoglu noted: “In last 12 years, TIKA and Turkey entered the picture. For our brethren, we built hundreds of tenements, even bought houses from them. Today, the Tatar population in Crimea is slightly above 300,000. This is all because of Turkey’s support.”

The decisions of the Crimean Parliament also were promising. It decided: “Tatars exiled in 1944 will be encouraged to return. Legal, material and property problems of the returnees will be solved. They will be offered financial assistance for five years. Primary, second and higher schools in the Tatar language will be opened. Historical and cultural relics will be restored. Tatar publications will be encouraged.” This decree also gave official status to Tatar language. Crimean Tatar National Assembly was given legal recognition. They were offered 20% representation in the national parliament. These were all rights Tatars could not obtain from the Ukrainian government. The only anxiety Turkey or Crimeans might express would to be say, “These promises can remain on paper.” But autonomy practices of Russia since the end of the Soviet era shows that at least when it comes to preservation of people’s language and cultures they have not a bad record.

Another scenario that concerns Turkey closely is the possibility of a Chechnization syndrome that could develop as a reaction to attaching the peninsula to Russia. Tatars with their historical animosity to Russia are between a rock and a hard place. There is talk of a jihadist threat after Russian annexation. Abduljamil, who had been spearheading the survival struggle of his people since the 1944 deportations, spoke of this potential danger: “We have among us Salafists, Wahhabis and organizations that fought in Syria. They tell me that the enemy is now on their land and that they are ready to confront them. We can’t stop those who want die in dignity.”

In addition to threats emanating from Takfir and Hijret Salafi organizations whose existence have been felt in Crimea in recent years, there is also the potential of global jihadist network concentrating in Syria to open an anti-Russia front in Crimea. Tatars who had gone to Syria to fight had first attracted attention on April 25, 2013, when a militant code-named Abu Khalid staged a suicide attack from the ranks of Muhajiroun and Ansar groups. Growing Islamic militancy in Ukraine first hit the agenda when seven militants were apprehended with their weapons. The Ukrainian Interior Ministry said that the apprehended militants were linked to Takfir and Hijret and Hizb-ut Tahrir and were planning to assassinate Abduljamil.

The desire of those fighting against Moscow-supported regime in Syria to settle accounts with Russia in Crimea scares Tatars who, like Abduljamil, prefer nonviolent resistance. A representative from the Tatar Crimean National Assembly said in our private chat: “Yes, there are Tatars fighting in Syria and they might come back. We are worried.”

The Tatars know only too well that provocation, whether from Ukranian radical nationalists or nationalist Russians or a Chechnization scenario originating from Islamist Tatars who want to open a jihadist front, will bring to them only a new exile or genocide.