The trends of Egypt’s crowd politics since Tahrir Square can also be seen in Ukraine, Syria and Libya. 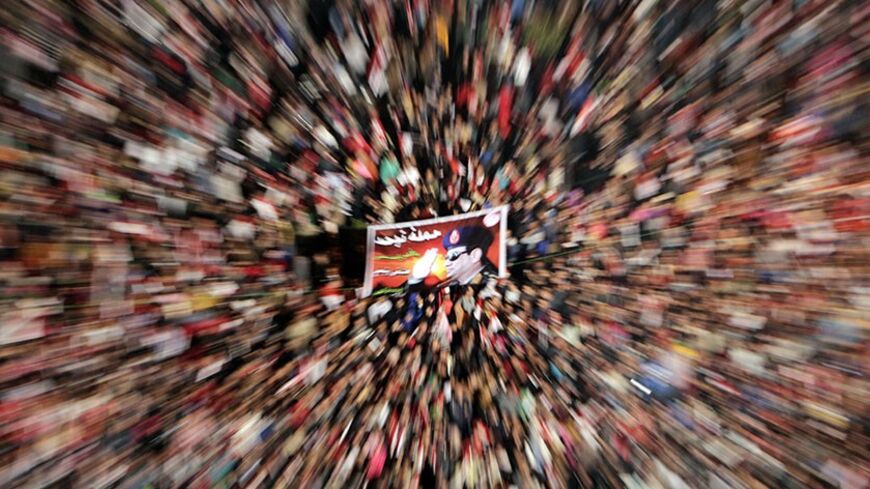 Behind every uprising are chronic frustrations from citizens betrayed by corrupt leaders, their repression, poor governance and a loss of hope in any political process that fulfills their aspiration for democracy, freedom and prosperity. Such events are always associated with frustration and cumulative anger that ultimately explode in the streets. The nature of street protests and their long-term impacts can vary depending on various dynamics in each country, and there are some alarming trends that were associated with the Arab uprisings that have resurfaced again with popular movements in other parts of the world.

Perhaps it is no surprise that the Egyptian Oscar-nominated film "The Square" was shown in Kiev. The ouster of Egypt’s Hosni Mubarak after years of tyranny has inspired many around the globe. It is doubtful, however, that the Ukrainian organizers have told their enthusiastic crowd about how the Egyptian uprising was struggling to fulfill its promises to the youth who congregated in Cairo’s Tahrir Square. Like many protest leaders, Ukrainian opposition figures were seemingly more preoccupied with toppling the corrupt Ukrainian president than with the day after his ouster. The film has done the job: Many were seemingly delighted to break with the past, but the Russian invasion of the Crimean region of the Ukraine was a rude awakening to many optimistic Ukrainians. Just as the Egyptians realized after their January 2011 revolution within a different context that the baggage of the past may continue to haunt them.

Egypt and Ukraine are clear examples of how increasing hype and unrealistic expectations have long-term, negative consequences on the transition from the street to a more robust political process. Protest organizers need to realize that the street is only step one in a long and often tricky journey of establishing a functional democracy. Without a plan that tackles the rest of the challenges, a more bitter reality will quickly turn the romantic dream into a frightening nightmare.

The new wave of protests has reignited the old debate about violent and nonviolent protests. Many protest movements started peacefully and then slowly turned to violent confrontations. Failure to achieve the aspired outcomes can tempt some protesters to push the boundaries of peacefulness under the slogan of “resisting the police” and “reject submission.”

In Ukraine, after weeks of responding peacefully to police brutality, a group of protesters decided to take the fight to the police, including members of the far-right party Svoboda. In Venezuela, a group of academics and politicians have written a letter deploring what they describe as “a wave of violence from minority and extremist sections of Venezuela’s opposition,” citing physical assaults on government institutions, including gunshots and Molotov cocktail attacks on the state TV channel and a state governor's residence. Egypt also had its share of violent confrontations. The rise of mysterious groups like the Molotov movement, which regularly claim responsibility for violent attacks on the police, signals a new turn toward violence by the “anti-coup movements,” particularly after the ruthless, forced end of the Islamists’ sit-ins in Cairo in August 2013.

Anger is a natural human response to brutality; it can lead to irrationality and emotional response. However, it is counterproductive and self-defeating. Police brutality is not just aimed at restoring order but also, after triggering violence, it is used as a pretext for more brutality. Revising the history of protests helps increase understanding of the deeper impact of violent protest on the strength of the state. In her book Why Civil Resistance Works, Erica Chenoweth found that violent resistance movements, even if they succeed, can create a lot of long-term problems.

Losing peacefulness is like banging on the wall after losing the door key. It will either drain one’s energy or break the wall, but both are futile and potentially destructive, and can ruin the state that the protesters initially aim to salvage.

Once instability affects any country, the temptation of foreign players to intervene increases sharply. The nature and degree of intervention vary, depending on various factors — from direct intervention (as in the case of NATO in Libya, Saudi Arabia in Bahrain or Russia in the Crimean region); indirect meddling, as in support of the Muslim Brotherhood in Egypt by both Qatar and Turkey; Saudi backing of the military-backed regime in Cairo; financing radical groups in Syria; or the backing of the ruthless Syrian regime by Lebanon’s Hezbollah, Iran and Russia.

All the above examples highlight how foreign meddling can produce a plethora of negative consequences and potential pitfalls, including the following:

The main role in street politics is the lack of any set of rules. It can be spontaneous, leaderless and chaotic. This is precisely why it is crucial to understand its limitations and risks if we are serious about supporting democracy in our messy world. There is a delicate relationship between the protest movement and the state. A regime collapse ends any protest but it also inevitably brings a destructive start to the functionality of the state. This destruction can be short and limited, but also can be long and painful, with bad outcomes that can be worse than the original crisis that triggered the protests in the first place. It all depends on the wisdom of local leaders and their outside supporters. They both can help the emergence of a new, prosperous state from the ashes of tyranny, or can add a new name to the long list of failed states scattered around the globe.