Recent Syrian arrivals in Turkey speak of the horror and impact of barrel bombs on civilian neighborhoods. 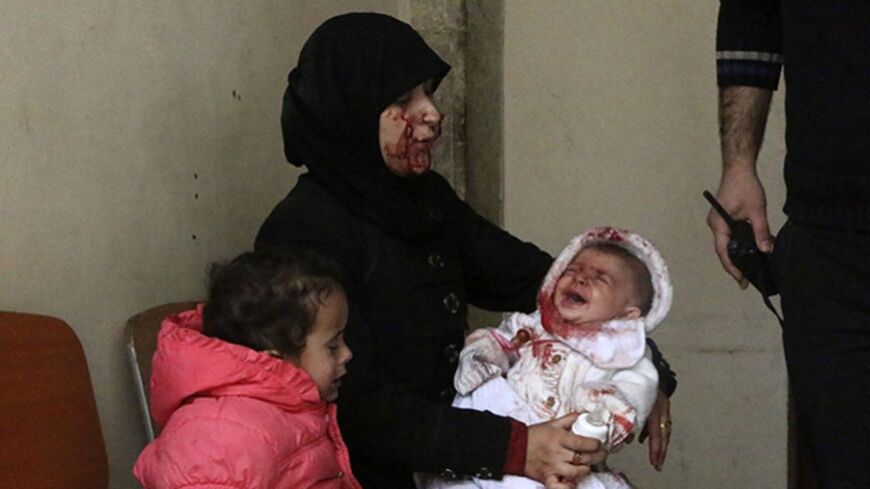 A woman holds her crying baby in a hospital in Aleppo's al-Sakhour district after what activists said was a barrel bomb dropped at Aleppo's Haydariye district by forces loyal to Syrian President Bashar al-Assad, March 9, 2014. - REUTERS/Hosam Katan

KILIS, Turkey — With her pale face and dark circles under her eyes, Amal looks like she hasn’t slept in days. And she hasn’t, she tells Al-Monitor, because of the constant explosions in her neighborhood. Two days before, Amal and her children fled to Turkey with only a few suitcases, leaving everything else behind.

In a park near the Turkish-Syrian border, the woman describes why she had to leave her house in Aleppo, the home where she lived happily for more than 20 years. Surrounded by her three adult daughters, she said, “Day and night, we were afraid that one of those bombs might hit our building. I thought I was going to lose my mind."

Behind her are the Syrian mountains. Nearby, 7-year-old Mohammed, her grandson, plays with his uncle. Amal looks at him, smiles for a bit, and bursts into tears. She cried, “My son brought us here and then went back to Syria to work. Now, Mohammed constantly asks us if his father is still alive."

Her daughter Marwa gives her a paper towel. With her other hand, she covers her eyes.

The northern part of Syria has been hit by a new wave of violence in recent weeks as the regime of President Bashar al-Assad escalates its barrel bombing campaign. The barrels — cylinders stuffed with TNT, nails and machine scrap — are pushed out the back of transport helicopters, causing wide of destruction when dropped on civilian areas. Compared to "normal" bombs, the barrels are cheap and easy to produce.

On the rare occasions Amal dared to walk outside, she found herself terrified. Some neighborhoods were destroyed, including schools, apartments and shops. Dead or severely injured people were caught under the rubble everywhere.

“You can never imagine what I saw until you have seen it with your own eyes. It looks like hell on earth," she told Al-Monitor, adding that once, she counted 20 bomb attacks hitting the neighborhood in one day.

The attacks led to a new exodus of Syrians fleeing to safer areas like Turkey. The United Nations reported Feb. 11 that more than 20,000 Syrians have arrived in Turkey so far this year, with sometimes 1,000 to 2,000 arriving daily.

At the Bab Al-Hawa border near Kilis, Syrian families arrive with torment in their eyes. Men, women and even children carry mattresses, suitcases and garbage bags of belongings as they cross the Turkish-Syrian border by foot. A Turkish ambulance rushes by. There was a bomb attack at the other side of the border earlier. Nothing blocks the vehicle's way — nobody is going back to Syria.

A Syrian woman behind the gate argues with the Turkish customs officer. She waves with her passport and yells at him. Other people intervene and the conflict comes close to escalating.

"Stop yelling," the officer screamed, raising his hand. Finally the woman calmed down and walked through the gate.

“It’s sad, right? Seeing all those desperate people entering with almost nothing?" a 21-year-old man from Aleppo told Al-Monitor, adding that he also escaped a few days ago and that he is now waiting for his brother and fiancée to arrive at the border.

The Kilis refugee camp is located right next to the border. A few miles further, there is a hospital where injured Syrians get treatment. Turkey is sheltering more than 624,000 refugees from Syria’s almost three-year-long civil war and has kept its border open throughout the conflict. Some families go straight to the refugee camp upon crossing, trying to register, while others take a cab and disappear into traffic. Nobody arrives knowing where they are going to sleep that night.

In another Turkish town, Reyhanli, Umm Khaled lives with her four children in a one-bedroom apartment. Two months ago, the family left Idlib after barrel bombs destroyed their house. In Turkey, they pay around $225 for rent and $45 for the electricity bill every month, an almost impossible amount for them, Umm Khaled tells Al-Monitor.

“My husband died 16 months ago. He was fighting with the Free Syrian Army. It was hard to make a living without him, but we managed with the help of friends and family," she added. After their house got destroyed, along with all their belongings, Umm Khaled and her children fled to Turkey. The streets were empty, she explains, as lots of people had already left Idlib.

“All those years we managed to stay in Syria," she said. “Until we had no other choice but to leave."

Although Assad has used these devastating bombs before in the course of the Syrian conflict, such attacks reached a new high in recent weeks. Exact figures for barrel bombs are lacking, but the opposition website Yalla Souriya counts at least 70 barrel bomb attacks reported between Feb. 23 and March 3. They also intensified significantly between late January and mid-February, surprisingly, during the latest peace talks in Geneva.

Most of the barrel bomb victims died in and around Aleppo, including women and children, but the Syrian Arab News Agency has repeatedly said that the Syrian government has “eliminated armed groups, including foreigners” and that the Syrian army “killed terrorists and destroyed their hideouts.” However, witnesses say that the regime is systematically targeting civilian neighborhoods and human rights groups have condemned the attacks, saying they fail to discriminate between fighters and civilians.

“One neighborhood after another, in order to win territory back. Assad intends to drive people out as he thinks all oppositionists are terrorists," said a Syrian activist from Aleppo. The activist repeatedly told Al-Monitor that the barrel bomb attacks continued after the Geneva peace talks ended and that they are now being used in parts of Damascus, Daraa and Hama.

“It’s devastating," he added. "Lots of Syrians already don’t have anything. No money, no food, no house. They do not even have the strength to flee anymore."

But some families desperately want to go home, no matter how dangerous the situation in Syria is right now.

“We are going back to our village near Idlib tomorrow," said a single mother of four in a grocery store in the city of Kilis. She said that not a lot of refugees return, but she is fed up with living as a refugee in Turkey. Her children don’t like it here, either, and miss their home. “My parents and older brother said the situation in our village is safe right now, so I decided it is time to return. We will see what happens in the future. I hope we stay safe."