Children at a Syrian field hospital near the Turkish border accept the war as the new normal. 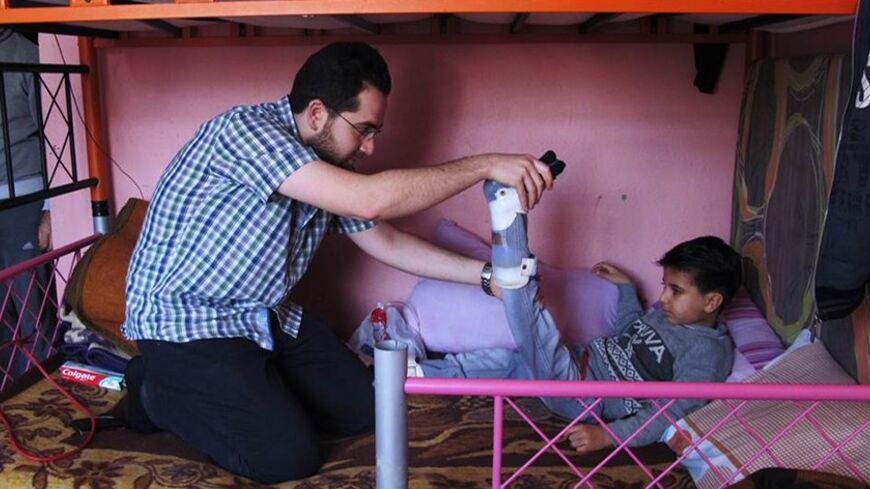 Dr. Wisam Budleh helps Saddam with his exercises at the Syrian Medical Center in Reyhanli near the Turkish border, Feb. 24, 2014. - Brenda Stoter

REYHANLI, Turkey — Three weeks ago, 15-year-old Mohammed was a normal, healthy boy. Although he lived in a war-torn country, he played with his friends and bought groceries for his mother whenever she asked. One day, he went to the bakery to get some bread for dinner later that night. Suddenly, he heard a big blast, fell to the ground and lost consciousness.

“When I tried to get up a few minutes later, I couldn’t. My leg was crushed," he told Al-Monitor.

Mohammed was treated in a field hospital near al-Bab, a town in Aleppo governorate inside Syria. The doctor soon found his leg was severely damaged and transferred him to a hospital in Kilis, near the Turkish-Syrian border, where he received treatment for his injuries. The Turkish doctor tried to save his leg, but couldn’t, and amputated it.

Asked if he feels sad about losing his leg, he told Al-Monitor that he hopes to get an artificial one soon. He doesn’t show any emotion while talking about the attack or losing an important body part. Despite the war in his hometown and the constant strikes with barrel bombs, Mohammed wants to go back to his mother in al-Bab as soon as possible.

“No, I am not afraid to get hurt again," he said. “After all those years we got used to the war."

His father told him that he can work in the family store in the future, after they make some adjustments regarding his handicap. It’s not exactly what Ahmed always wanted, but he accepts it.

After three years of conflict, the Syrian war has affected every Syrian family inside and outside the country. Many of them lost relatives and friends due to the constant shelling, fights and airstrikes. Yet, no matter how hard the situation is, Syrians try to continue their lives, although the war between the government of Bashar al-Assad and the rebels is becoming more complicated every day.

Children and teenagers especially seem to have accepted the war. They deal with injuries as the adults do and talk about airstrikes in the same way they talk about the weather. But thinking that killing and death are normal is also a sign that they are suffering from war trauma, said Dr. Wisam Budleh, 26, who works as a therapist in the Syrian Medical Center in Reyhanli.

“Adapting to the new situation is very common among children, but almost all of them will have psychological problems in the future. Some stop talking, some have nightmares and others get anxious," Wisam told Al-Monitor.

The Syrian doctor helps 7-year-old Saddam with his exercises. The young Syrian boy was transferred to the Syrian Health Center after receiving treatment in Hama and Turkey. He got wounded when he was playing with his friends on the streets of Idlib. After he heard some buildings exploding, he wanted to see where the sounds came from and climbed into a tree. The next bomb landed near the tree and shrapnel struck his legs and back.

Saddam doesn’t talk much, but when the doctor asked him what happened he smiled and said, “Boom boom.” After that, he continued watching a cartoon on the television. “We see that a lot — young children talking about the war and dead people as if they have just seen a war movie," Wisam said.

Wisam still visits Syria every few weeks. Inside the country, he has witnessed children playing on the streets while there are airstrikes or fighting going on only a few miles away. Sometimes, they even bump into corpses. He said they don’t even look surprised anymore.

The Syrian Medical Center, also known as Dar al-Istshfaa, helps wounded Syrians requiring long-term care and rehabilitation and was founded by the Paris-based Union of Syrian Medical Relief Organizations, a coalition of 14 independent medical and relief organizations. It has been operating since July 2012 and has treated more than 10,000 people, regardless of race, religion or political views. Most of the people staying here are paralyzed, have lost body parts or have broken bones; 10% of them are children.

Wounded in an explosion, Mohammed, sits on his bed at the Syrian Medical Center in Reyhanli near the Turkish border, Feb. 24, 2014.

Ahmed, a 14-year-old boy with a humble smile and a gentle voice, is studying a mathematics book in a colorful room. He was wounded a few months ago in Maarat al-Numaan, a city in northwestern Syria, and can no longer walk, but still he wants to finish his education and he dreams about becoming an Arabic teacher.

“Yes, I want to go to the university in Syria," he added, and said he doesn’t want to live in Turkey anymore.

Ahmed and his father always went to anti-government protests in their city. The protests were often attacked by pro-government militants or mortars, and a lot of people died, he told Al-Monitor.

However, he wasn't wounded during a demonstration. One day, he and his father saw some children playing on the streets when militants shelled the neighborhood. His father tried to warn the children, but they didn’t leave because they were used to the sounds. A few seconds later, a mortar strike hit their own balcony and both of them were hit.

“When we first got bombed, years ago, I was a little bit afraid, but now I’m not anymore. I can handle it," Ahmed said with a smile.

After he shared his story, he opened his mathematics book, and continued studying.