More than 75,000 Syrian refugees in Egypt live on the edge, wondering if they will ever return home. 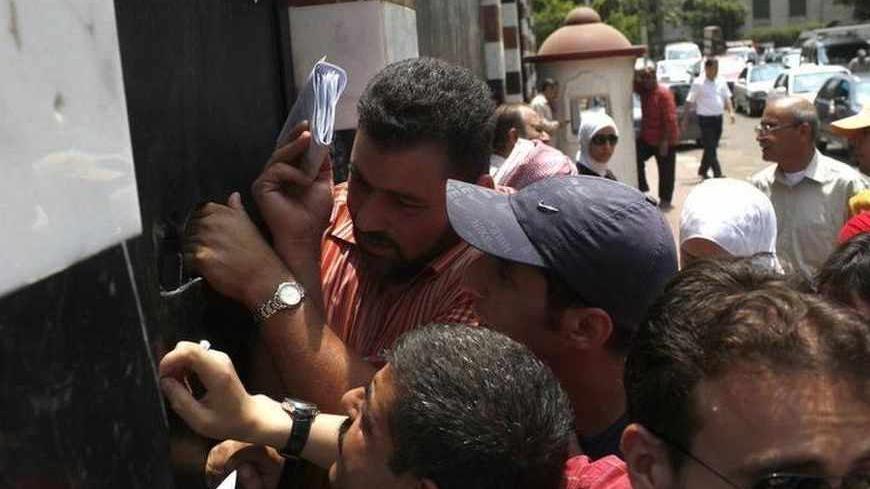 Syrians who are picking up their passports line up in front of the Syrian Embassy in Cairo, June 16, 2013. - REUTERS/Asmaa Waguih

Waafa Mearwy lives with her son Bashar in a small apartment in 6th of October City on the outskirts of Cairo. The city is called Little Syria, because thousands of Syrians fled to this place since anti-government activists began their struggle to topple Syrian President Bashar al-Assad in 2011.

Waafa came to Egypt a few months ago, when two of her son’s friends got killed by snipers near their home in the southern Damascus district of Nahar Aisha. Her two daughters and their husbands still live in Syria.

"When his friends died, the war got under his skin, and Bashar got really depressed. I was so afraid that something like that might happen to him too, that I decided it was better to leave. And now we are here, in Egypt, feeling lost and homesick," she said in an interview with Al-Monitor on July 10.

She shows a picture of two young boys, not older than 16, and starts to cry, while sitting at a table in a Syrian restaurant, waiting for Bashar to finish his 12-hour shift. When some young kids at the end of the street set off fireworks, Waafa looks anxious.

"It almost sounds like the bombings in Syria," she explained.

In 6th of October City, there are a lot of Syrian restaurants, candy shops and other stores which are related to "Sham," the region of Syria. As the conflict drags on with no resolution in sight, many Syrian shop and restaurant owners have relocated to Egypt, where they have been re-establishing their businesses. But not everybody has the money to start all over again.

Waafa’s son Bashar works six days a week, 12 hours a day and makes EGP 300 [$43] a week. It is hardly enough to pay all the bills and buy groceries. His boss, Abu Feras, opened this family restaurant with other Syrians who had money to relocate. He hires only Syrians such as Bashar, and most of his customers are Syrian too.

"In Egypt, there aren’t any bombings or attacks, the prices are cheaper than in countries like Lebanon, and we didn’t need a visa to come here, so that’s why this country attracted a lot of Syrians. But if I had the chance, I would go back immediately," he told Al-Monitor. He added, "There is no place like home."

The unlimited flow of Syrian refugees to Egypt has stopped since Mohammed Morsi's ouster. The Egyptian Foreign Ministry has instituted new regulations requiring visas for Syrians; those arriving at Egyptian airports without visas have been put on return flights. According to the ministry, these restrictions are temporary because of the unrest in Egypt.

More than 75,000 Syrians have registered with the Egypt office of the UN refugee agency as of July 17, but the estimated number of Syrian refugees in Egypt is 300,000. The majority of Syrians arriving in Egypt are believed to be residing in 6th of October City, Al-Haram, Faysal, Al-Obour, Nasr City and Al-Rehab.

She and Bashar told Al-Monitor that aid agencies send money and food to rich and important Syrian families, but that they don’t share the contributions equally. So far she has received little.

Waafa explained, "I think I’m going back after Ramadan because the situation gets worse every day. Sometimes we get help from Egyptians, but they don’t have a lot to share either because of the current situation and the high poverty rate."

While protests and clashes continue, and the prices in Egypt are rising because of the continuing unrest, Zouhair el-Hallak, 38, sells sweet juices on the main street of 6th of October City. Four months ago, he was a well-known manufacturer of Syrian candy in Damascus, until his store and house were destroyed by militants. According to him, making money in Egypt is really difficult, because almost nobody has money to buy luxury items.

"I simply had to leave Damascus. In Syria, the prices went up sixfold, so I couldn’t pay my bills anymore. Here in Egypt things are expensive too, but I cannot go back because I don’t have anything to go back to."

When two foreigners buy juice and start a conversation about Syria, Zouhair tells them he really misses his country. "It was a good country with nice people, a low crime rate and not a lot of poverty," he tells them, smiling generously. The foreigners want to give him some money for their drinks, but the green-eyed merchant refuses.

On the same street, a young boy is hanging out with some friends. Kutaiba Cheikhany is the same age as Bashar, but, unlike him, he doesn’t have to work to pay the bills. The Egyptian government made it possible for Syrians who left their country to enroll in public schools and universities.

Kutaiba’s father works as a cab driver and has a share in a Syrian shop. But, still he struggles to provide food and shelter for his family. In Syria, they had a good standard of living, and they considered themselves middle class — however, the war changed everything.

"We left the country for several reasons. First, we were afraid of bombings and shootings. Second, because Assad's secret intelligence agency [mukhabarat] was questioning us about my uncle, a well-known general in the Free Syrian Army. We were afraid to be arrested or killed by the mukhabarat. That happens a lot in Syria."

After school, Kutaiba also maintains a Facebook page for Syrians in 6th of October City. Syrian employees and shop owners are offering their services on this page, which already has 1,700 members.

Despite feeling homesick, he has a lot of friends in Egypt, as a lot of Syrians now live in the same neighborhood. "Sometimes it looks just like home, especially when you meet old acquaintances on the street. But we all know that 6th of October City cannot replace Syria. A lot of Syrians over here are depressed."