Syria’s women could be key to the future

Idlib province is witnessing a rise in activities aimed at empowering women who have suffered in the ongoing war in the country. 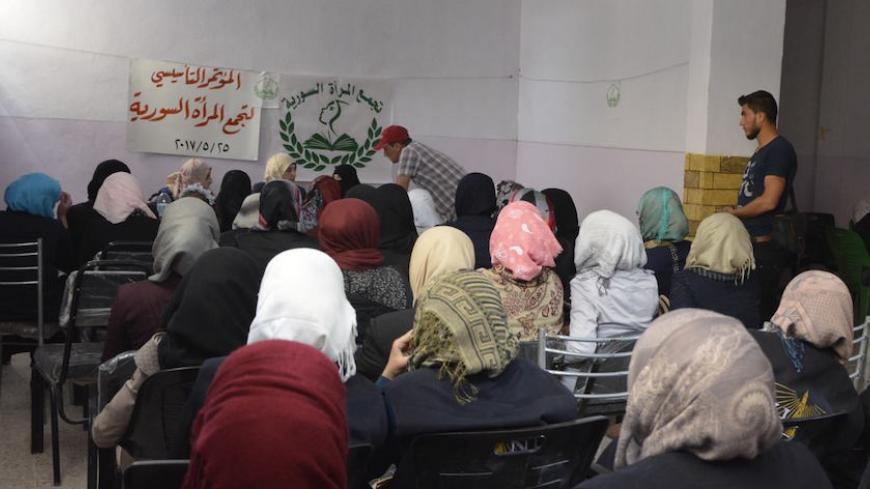 Women attend the inaugural conference of the Gathering of Syrian Women in Maarat al-Numaan, May 25, 2017. - FACEBOOK/SMARTNewsAgency

ALEPPO, Syria — The opposition-controlled Idlib province in northern Syria is witnessing a growing female movement that aims to develop the skills of Syrian women and empower them to meet the responsibilities they now have to assume as a result of the ongoing war.

Several women’s organizations have been established in Idlib province since early 2017. The activities they provide are intended to develop women’s skills in various aspects of life, such as psychological support, work, health, media, community, family and children. They also hold events on special occasions related to women.

These groups spread their activities across the province. In Idlib city, the Women Commission for Supporting Women and Children was established on Jan. 21. It aims to educate women in the city and develop cultural awareness.

Woman Fingerprint was formed in early 2016 in the city of Idlib and aims at eradicating illiteracy among women. The Educated Women’s Association is also active in Idlib city. Established in early 2016, the association works on developing women’s skills and training them in different fields.

The increasing activities for women spread to other major towns and cities in Idlib province. In the city of Maarat al-Numaan, the Gathering of Syrian Women was created May 25. The gathering, headed by Huda Serjawi, aims at promoting women’s experiences in the city and raising cultural awareness.

The Balsam Center to Empower Women was established May 5 in Kafr Nabl city. The center is part of a series of projects for women sponsored by the Syria Relief and Development (SRD) foundation.

The SRD also established Al-Amal (Hope) Center for the Empowerment of Women and Girls in Ariha city on Nov. 1, 2016.

The Nassim (Breeze) Center has been active in the city of Jisr ash-Shughour since its opening on Jan. 3 and works to develop women’s skills.

Other associations for women are active in different towns in the province, such as Bsheiriyeh town, where female activity is on the rise.

Since the start of the Syrian revolution, women have been involved in the revolt against President Bashar al-Assad’s regime. In this war, women and men have worked as equals: In addition to working as nannies, doctors, journalists and aid workers, women also organize protests, call for freedom, have died for freedom and gotten arrested, just like men.

Women also suffer major burdens in the absence of men, and a large number of women in the Idlib province have become the sole breadwinner of their families.

They found themselves forced to work to feed their children. This situation shed light on the importance of associations and initiatives for women to develop skills so they can meet the responsibilities they were now assuming.

Shaimaa Mohamed, 35, from Idlib city, is now raising her five children alone after her husband was killed in an air raid in mid-2016. Mohamed completed a two-month sewing session provided by the Educated Women’s Association in January and February. In March, she started working from her home making dresses for the women in her neighborhood. She sells each dress for 2,000 Syrian pounds (about $9).

The Educated Women’s Association also provides Mohamed with food assistance offered by some charity organizations. Through all this help, Mohamed is now able to meet the needs of her kids.

The initiatives help many women find jobs. Sarah Abbas, 22, took hairdressing and makeup courses at the Nassim Center in Jisr ash-Shughour in early 2017. She told Al-Monitor, “I got a job in a field that I love, which is hairdressing and makeup, thanks to the Nassim session. I am now operating my own female salon at our house. Women are flocking here to style their hair for special occasions like weddings.”

Sarah charges 4,000 Syrian pounds (about $18) for a haircut and makeup. This amount is enough for Sarah, who is still single; she helps her father with the house’s expenses.

Serjawi, the head of the Gathering of Syrian Women, told Al-Monitor, “The goal of the gathering is to organize the energies and efforts of women toward a unified collective work. We also work on raising awareness among women, raising their cultural level and developing their experiences to enable them to effectively participate in cultural, economic and social life. The goal also resides in empowering women to [issue] policies and legislations [in the future] on women and their rights, and offering services and programs that guarantee women’s security and stability within their families and communities, based on human rights.”

She added, “We prepare women and train them to assume their role in protecting their family, raising new generations and community building. We also prepare them on the economic and social levels. In addition, the gathering draws plans to identify the problems women in Maarat al-Numaan are facing and seeks solutions. We also seek to improve vocational and intellectual competence and mobilize women’s skills to assume a national role in building a better community and a free Syrian state in the future.”

Serjawi noted that the gathering has no fixed funding and relies on donations made by its female members. However, the inauguration conference May 25 was financed by the Syrian Network for Human Rights.

The Educated Women’s Association is considered one of the most important female-related organizations in the city. Nariman al-Khalifa, the director of the association, told Al-Monitor, “The main goal of the association is to support women in light of their suffering under the brunt of war. The association holds several activities on awareness and psychological support, for example — vocational training for women’s capacity building to help her enter the job market, and children's activities in schools.”

Khalifa noted, “There are more than 200 women volunteering at the association, and this high number helped develop their activities, hold several sessions on various fields ranging from first aid, nursing and manual work, to learning computer [skills], foreign languages and hairdressing.”

She explains that the current programs on education, manual work and sewing are currently held at the association’s headquarters in Idlib city. There are more than 50 women attending each program in June.

As the war continues to take its toll on the security situation and social conditions, questions arise as to whether such women’s associations can continue their work and whether these activities will help women in Idlib play an active role in the future.