A new report highlights the wasted potential of the tourism sector in Lebanon. 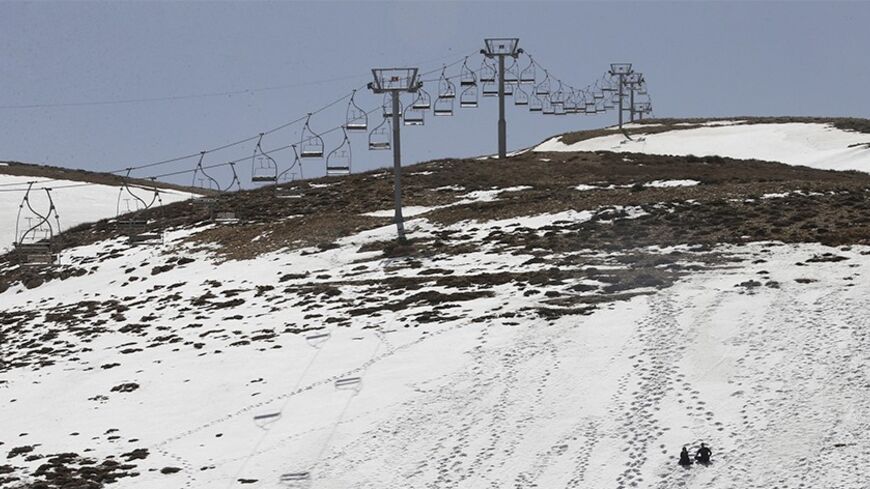 A ski resort north of Beirut is closed because of lack of snow, March 7, 2014. - REUTERS/Mohamed Azakir

A few days ago, the World Travel & Tourism Council published a report titled “Travel & Tourism, Economic Impact 2014, Lebanon.” The report’s contents were not surprising. It shows numbers indicating the importance of the tourism sector in Lebanon because tourism contributes to the national income, creates jobs, and accounts for a significant portion of the labor market.

The report reveals the size of the economic potential of the tourism sector, which until now has not been fully invested. In other words, the report showed the cost of missed opportunity arising from the lack of stability and from the delay in implementing structural reforms that are necessary for all productive sectors and for the public administration.

This is not surprising, especially since the growth rate expected for Lebanon, according to the most optimistic estimates, is no more than 2%. The growth engines are almost idle because of the worsening Syrian crisis and its effect on all the security, political and economic agreements. It should be noted that the total contribution (both direct and indirect) for the travel and tourism sector, which affects all economic sectors, is expected to be $9 billion dollars, or 19.3% of economic activity in 2014.

As for the impact of this sector on the labor market, the report indicated that its total contribution to the national labor force could reach 18.6%, the equivalent of 261,300 jobs. The sector’s direct contribution to employment is expected to grow by 2.7% this year, putting Lebanon 99th in the world.

This report confirms what everybody already knows about the tourism sector in the Lebanese economy. The sector contributes a large share to GDP, making it a key economic pillar and a primary growth driver, which must be activated to restart the growth cycle and take the country out of its current stalemate. The low growth rates of economic activity and the labor market, and the relatively low global scores, are only evidence of the cost of the political and security crises and the tensions afflicting Lebanon.

This is the cost of missed opportunities. What’s interesting is the report’s positive projections until the year 2024. During that period, the expected growth in the long term puts Lebanon in 14th place globally, out of 183 countries covered by the study. These projections show the large potential of this sector, where investments are being hindered by the political conditions and the inability of the ruling class to overcome them.

In fact, the tourism sector in Lebanon has a productive capacity that may exceed even those projections if one takes into account the many possibilities for development, as is the case in economically developed countries. The tourism sector grew significantly and became more versatile. There is now medical tourism, business tourism, and even religious tourism. All of those have a fertile ground in Lebanon if the proper environment is made for business, good governance, and an appropriate legislative framework.

In the area of ​​travel, the return of calm and stability, and making Beirut’s skies open to all, would be enough to transform this distinctive city — given its geographic location and its level of services — into an international hub for transport and communications, which would boost growth.

There is a raging debate inside Lebanon on controversial topics, which have been outstanding for years, around a dialogue table, an extra-constitutional institution. The dialogue is intended to move the conflict from the street into a locked room. While political parties exchange charges about the economy, the growth of public debt, high unemployment, emigration, and the disruption to the production cycle, this report comes to shed light on one sector and shows, by the numbers, the underlying productive capacity of the Lebanese economy and how it is being crippled by politics. And developing of this sector is only the tip of the iceberg.

However, the political class is totally absent from the economic worries, and published reports by international institutions are neither read nor discussed. Ironically, the presidential bazaar kicked off two days ago, with the start of the constitutional period to elect a new president. There is no official candidate for the job yet, and the lack of candidates means a lack of electoral programs, including reform and economic programs. Presidents normally come “from the outside,” i.e., through a regional settlement. As we await what the outside will do, Lebanon is stuck dreaming about reforms, which may come one day, but every day until then is a missed opportunity.